difficult to imagine two nicer guys playing for a Top 8 match. Terry Soh is the 18-year-old Malaysian sensation who followed up his Worlds Top 8 with another Top 8 appearance this weekend, giving him back-to-back Top 8s for Pro Tours he's attended. He says that he learned to play Magic from his younger brother, who just happens to be a former Malaysian national champion. Terry was able to draft a removal-heavy red-black deck in the final Rochester draft ever, and looks to be the beatdown in this matchup. 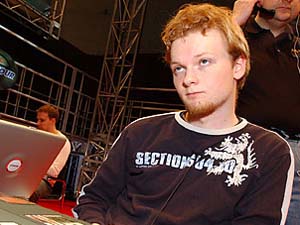 His opponent is the baby-faced Dutchman Frank Karsten. Karsten has five Grand Prix Top 8's to his name and has been a long-time pick for many players to notch his first Pro Tour Top 8, coming brutally close to a Sunday appearance five previous times before falling out of contention. Not this weekend though, as he knocked fellow countryman Jeroen Remie out of contention in order to secure his own spot at the final draft table. Frank's deck is a solid green-white creation, not a color combination that Frank was looking to draft, but something he got pushed into when the two players in front of him started out squabbling over red, black, and blue.

Karsten mulliganned down to six in Game 1, and Soh decided his first seven were good enough to play. Terry started off with a Cruel Deceiver and Hanabi Blast on Frank's Kabuto Moth, a nice start for his aggressive red-black creation. Kami of Old Stone sat his fat booty in the way of any ground attacks. Soh peeked at his top card before attacking with the Deceiver and Karsten guessed wrong, choosing to block the little black spirit and losing his kami in the process. Cruel Deceiver got stuck in a Cage of Hands while the two players looked for any sort of action from the top of their decks. Karsten drew Keiga, the Tide Star and had enough mana to play the dragon-y bomb, but lacked the necessary blue to plop it down on the table.

Hanabi Blast went to work on Frank's fresh Orochi Sustainer, and Cage of Hands moved over to Soh's Villainous Ogre, letting Brutal Deceiver finally get his beat on. Feral Deceiver leapt into the fray for Karsten, looking to stem the tide of beats, but for this reporter, having the benefit of seeing Soh's deck while he was building it -- and knowing that he still had Hanabi Blast in hand -- it's likely that Terry's grip was full of removal spells just waiting for a ripe target. Swallowing Plague proved that hypothesis a fact, but the game became very interesting again when Karsten flopped Myojin of Cleansing Fire onto the table.

Soh decided the Myojin meant it was time to start sending Hanabi Blast at Karsten's dome, using two Swamps and six mana to send four points of damage directly at Frank's dome. The Myojin continued Karsten's beatdown plan, but Soh put the Blast to work like it owed him money, using five activations in the end to reduce Karsten's life from a very healthy ten life to a very dead zero.

Soh looked over at me and said, "That's the only way I could win." With a 4/6 indestructible creature on Karsten's side of the board that can wrath at any time, the Blast seemed like a perfectly sound strategy for Soh to get out to an early 1-0 lead. 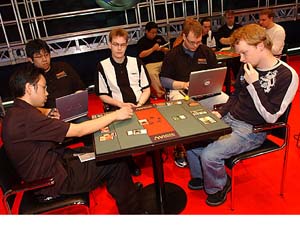 The match between Soh, left, and Karsten came down to a classic ending.

Kartsen was faced with the very interesting choice of Orochi Sustainer or Sakura-Tribe Elder on turn 2 of Game 2, eventually deciding to play the Sustainer, allowing him to cast Kodama's Reach on turn three for two lands of his choice, even if he didn't draw an additional land during his third turn. The Reach on turn three put him in position for a turn-four Keiga, but Hanabi Blast on the Sustainer made sure that didn't happen. Frank opted for Plan B instead, casting Honda's Hatamoto and Kitsune Blademaster and then plopping Keiga down on turn six. Soh used Kami of Fire's Roar activated via Wicked Akuba to drop Karsten to 14, but Karsten dropped the Old Stone fatty and Sakura-Tribe Elder onto the board on the next turn, complicating any ideas Soh had about attacking through Karsten's men.

Soh used Blast on Kitsune Blademaster and was finally forced to discard it, earning a "Oh, that's new" from Karsten. A second Elder further gummed up the ground and Kabuto Moth defended the air, letting Keiga strike with complete freedom and evening the match at a game a piece.

The third game was all about Kami of Fire's Roar. Soh used the troublesome red spirit to make blocking impossible as he attacked with Nezumi Ronin and the kami. Frank kept playing out creatures, losing Kitsune Blademaster to Swallowing Plague, but keeping Feral Deceiver, Harsh Deceiver, and Burr Grafter on the board. Candles' Glow went to the graveyard via Distress from Karsten, but Harsh Deceiver took down the Ronin by itself in a questionable attack from Soh.

Hanabi Blast on the Deceiver made Burr Grafter go away, but it cost Soh a Yamabushi's Flame as well. The pace of play slowed to a crawl while each player took their time each turn considering his options. Feral Deceiver killed a blocking Kami of Fire's Roar that forced Soh to again use Blast to finish off a dude, a move he admitted was a reach, as he realized the game was slowly slipping through his fingers.

Moss Kami from Karsten furthered that impression, but Soh still had a Blast in hand and 23 life, so his clock wasn't ticking particularly fast. Cage of Hands made sure Scuttling Death wasn't going to swing any more, but Wicked Akuba and another successful Blast brought down Harsh Deceiver, leaving Karsten with a mossy fatty as his only creature. Kami of the Old Stone made his third appearance of the match for Karsten, tossing an even bigger and more troublesome blocker in the way of Soh's burn and Akuba. 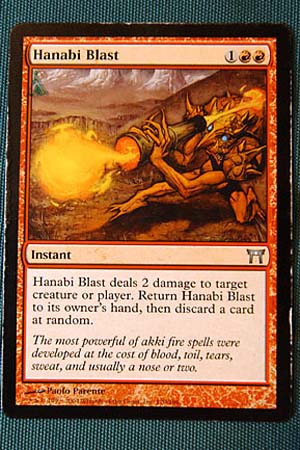 The game degenerated into "draw, go" for a few turns while Karsten gorged on land and Soh looked for a way to push through the final eight points of damage. Scuttling Death brought back Kami of Fire's Roar for Soh and he now appeared ready to strike. Terry cast Cruel Deceiver making Moss Kami unable to block, activated his Brutal Deceiver, and the game was soon over.

"Especially when you play with it," Karsten added.

Soh looked, "Did you keep a record of how many times I successfully cast Blast?"

After all the blasting action in the first three games, Soh's Blast was literally worn out, forcing the judge to leave the feature match area in search of a card that wasn't visibly worn.

Karsten mulliganned his first hand in Game 4 and drew a second set with four lands, Candle's Glow and a six-drop - not exactly what you want to see when you are facing elimination in the semifinals. Karsten's next draw gave him a Kabuto Moth, letting him have a creature on the board for turn three, but by that time he was already facing down Akki Avalanchers, Cruel Deceiver, and Soh cast Brutal Deceiver and Villainous Ogre hot on their heels. Harsh Deceiver and Moss Kami joined Karsten's squad on the next two turns, but Thief of Hope and Frostwielder for Soh turned bad into downright ugly for the soft-spoken Dutchman, giving Soh six creatures to his three and inevitability in Thief and Frostwielder to boot.

Karsten wasn't about to roll over though, attacking with Moss Kami and then casting Burr Grafter leaving to mana open for Candles' Glow. Distress removed the problem, forcing Karsten to cast the Glow in response, but it let him avoid any attacks from Soh as he simply added a Hearth Kami to his massive army of men. Soh literally had half of the creatures in his deck on the board. That didn't stop Karsten from using Moss Kami to run right over them though, knocking Soh to eleven life. Seeing no way to gain an advantage, Soh again passed the turn back to Karsten without an attack, and Karsten decided things had become dangerous enough to pass the turn without an attack himself, leaving Moss Kami chilling on the sidelines this turn. 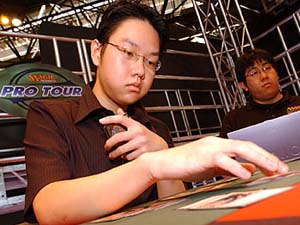 Soh cast Swallowing Plague for four on Karsten's Kabuto Moth, causing Frank to sit for a few minutes deep in thought. At the end of it, Frank shocked the crowd by saying, "I have no clue what to do here," a statement that you never hear from top-level Magic players. He eventually chose to use Burr Grafter and the Moth to save it. Soh chumped the Blademaster with Hearth Kami, but took another five from Moss Kami, making the life totals 10-7 in favor of Karsten.

"Nine life?" was the question from Soh after he chose to only block the Blademaster with Gibbering Kami, putting Karsten in a very intriguing position. His Deceiver activation gave him seven damage on the board, and Kabuto Moth could make that eight, giving him a kill if he used the Moth . . . provided Soh did not have the Arcane Soulless Revival to give him the one extra life due to Thief of Hope. On the flip side, Frank's fear obviously had to be that Soh might be playing an obvious bluff and would just kill him on the return attack, sealing the match.

"You must be trying to trick me, saying 'I'm at nine' there," Karsten said.

Regardless, he took the bait, pumping his Kami and stacking damage, but Soh cast Soulless Revival, giving him the one life he needed. Soh then played Wicked Akuba and Hearth Kami on his turn, dropping Karsten to four with Frostwielder activations and then attacked with five creatures of two power or more against Karsten's defending army of three, giving Soh a very entertaining victory and a trip to the semifinals.