players sat down and began shuffling, having been revitalized by a tasty Pro Tour Top 8 lunch. Before that, Shu had trounced Vasilis Fatouros, while Murray had pulled out a match against Jarno Harkonen's triple shrine concoction. They were both quiet, but determined. 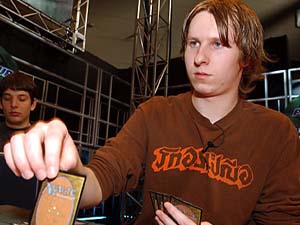 Murray pulled up a hand with five blue cards, Nezumi Cutthroat, and a Swamp, and wisely decided to mulligan. His new hand contained two Islands, a Swamp, Counsel of the Soratami, Soratami Cloudskater, and Wicked Akuba, which was much more acceptable. He opened with Cloudskater and Wicked Akuba, which stared across at Soratami Rainshaper and Rootrunner. He then Counseled, spending his turn to undo his mulligan.

Rootrunner reduced him to 17 and Shu summoned a Kashi-Tribe Reaver. On Murray's turn, he evened the score with Wicked Akuba and then played out Ashen-Skin Zubera and Cruel Deceiver. Shu sent in his Reaver for 3 and made Sakura-Tribe Elder.

Murray found Long-Forgotten Gohei on top of his library and promptly put it into play, pumping his Akuba, Deceiver, and Zubera. The first two leapt into the red zone, with the Deceiver connecting for 3 and the Akuba running into the Elder. Shu's Rootrunner then attack back and was saved from a double block by Kodama's Might. The black Zubera and Cloudskater hit the graveyard and Shu pitched a Forest. He was done, with the life totals at 14 all.

Both players were being exceedingly precise about their play, taking great care to make it obvious what their intentions were.

Murray sent in Cruel Deceiver, not knowing his top card. Shu took the damage and then used Hisoka's Defiance on the post-combat Scuttling Death, leaving Murray tapped out except for a 3/3 Akuba. Shu asked for the life totals.

He sent in the whole team. Murray sucked up the damage and fell to 6, planning to rely on the Consuming Vortex and Psychic Puppetry sitting in his hand. River Kaijin joined Shu's growing team.

Murray drew his other Puppetry and pushed Akuba into the red zone. Before blockers, he targeted the Kaijin with Consuming Vortex, splicing Psychic Puppetry targeting his own Wicked Akuba. Shu had the second Defiance and the first game was over.

Sideboarding from the Canadian went as follows: 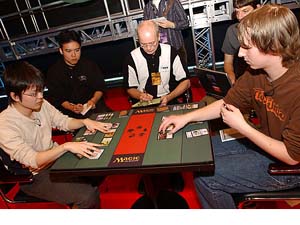 He missed land drops on turn three and turn four, but Shu couldn't punish him much, only mustering a River Kaijin before the second was countered by Hisoka's Defiance.

Murray then found a third land and made Nezumi Cutthroat, but it seemed outmatched by Order of the Sacred Bell. A fresh Gibbering Kami blocked the River Kaijin and he found his board wrecked by Kodama's Might splicing Glacial Ray.

For the third game, Murray kept a hand of Island, Swamp, and five spells. He ramped up quickly with Nezumi Cutthroat, Nezumi Graverobber, Wicked Akuba, and Soratami Cloudskater all in play by turn four. Shu had River Kaijin, Soratami Savant and eventually Teller of Tales to try to stem the bleeding. Murray played out Cruel Deceiver and then bounced River Kaijin with Consuming Vortex on end step.

It's not clear that this wasn't an overly hasty decision, as the Gohei actually only pumped two of the creatures on the board and Shu was still at 14 life. He could block with his Savant on the Cloudskater, his Teller of Tales on the Nezumi Graverobber, and only take 8-10 damage while keeping both of his creatures. It doesn't seem like that's an unwinnable position, although I wasn't able to see his hand.

In any case, he still had a one game lead and it was on to Game 4. 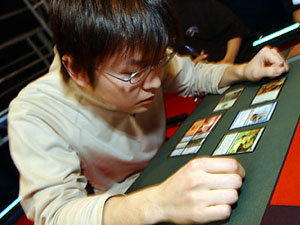 Everyone will be taking a closer look at Komuro now.

If Murray could have picked out a perfect hand from his deck, it would have looked a lot like this one: Island, Swamp, two Nezumi Cutthroats, Hisoka's Defiance, Gibbering Kami, and Soratami Cloudskater. He, well, kept the seven. Shu did accelerate into a turn-three Feral Deceiver, but he was already facing down the double Cutthroat. Quite a clock.

He sent his Deceiver and made a Kashi-Tribe Reaver, doing his best to race. Murray just played a fourth land and Gibbering Kami after a swing for 4. He nudged it in front of the Reaver of the Deceiver and hoped to trade, but Shu's deck came through with Kodama's Might splicing Vortex onto one of the Cutthroats. Murray drew into his fifth land and made Scuttling Death, tapping out yet again.

Shu shrugged and bounced that as well, crashing in with both his creatures, then played out Sakura-Tribe Elder. When Scuttles came back, he was content to trade his Deceiver and the Elder for it. Murray Soulshifted back Gibbering Kami as well, getting three for one on the deal. Still, he was under a lot of pressure, especially so when Shu added Teller of Tales.

He played a blocker, but Shu tapped it down when River Kaijin hit the board. His last chance came when Shu declared his attack. Tap down your creature with Psychic Puppetry? Shu slammed down Hisoka's Defiance and took the match -- and a spot in the finals -- in style.