starting out 9-0, Sweden's Anton Jonsson made it into the Top 8 by the skin of his teeth, but he managed to dispatch Masashiro Kuroda in the quarterfinals 3-1 to give him his third semifinals berth in the last three Limited tournaments. Teenage Malaysian sensation Terry Soh also roughed up quarterfinals opponent Frank Karsten 3-1, setting up this blue-red vs. black-red matchup. Soh's deck doesn't have any spectacular creatures, but it is removal heavy, something most Limited players prefer if given the choice between lots of removal and bombs. Jonsson's deck is a few cards short of spectacular as well, but he's played solid blue-red decks like this all weekend long and has done very well with it, so there's little reason to expect otherwise here. 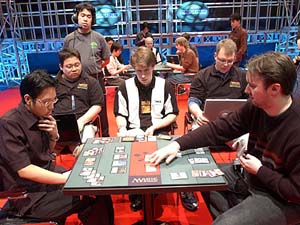 Jonsson and Soh had both made Top 8s before.

Jonsson mulliganned his first hand and chose to keep a six-card hand with two Mountains and some spells. Jonsson missed his third land drop, but found it a turn later with another Mountain -- acceptable, but not useful in casting the River Kaijin. Soh played a turn-two Cruel Deceiver and then watched as Jonsson used Yamabushi's Flame on Villainous Ogre, Scuttling Death, and Cursed Ronin. Jonsson finally ran out of removal for Soh's dudes and took some damage from the Deceiver and Akki Avalanchers.

Jonsson gave a wry smile when he bounced Akki Avalanchers back to Soh's hand before casting Ronin Houndmaster. Smithers (as the Houndmaster is often referred to) died to Rend Flesh and Jonsson's deck ran out of gas, letting Soh push enough damage for the win in spite of a Mystic Restraints on his Wicked Akuba.

Jonsson sideboarded out Eye of Nowhere and Battle-Mad Ronin for Hisoka's Defiance and Guardian of Solitude.

Jonsson's hand for Game 2 was much better, giving him Hearth Kami and River Kaijin plus a Yamabushi's Flame and plenty of land. Flame took out Soh's Brutal Deceiver, letting Jonsson go on the attack for the first time in the match. Another Flame removed Gibbering Kami from the game, letting Anton bash unimpeded dropping Soh to 12. Soh cast Swallowing Plague on a fresh Soratami Cloudskater from Jonsson, and then cast Cursed Ronin, giving him an able-bodied blocker to play some defense. Jonsson's plan shifted slightly from pushing through damage to overwhelming Soh with bodies, playing two Guardians of Solitude and Ronin Houndmaster on consecutive turns.

Soh finally began to stabilize while still sitting at a healthy ten life, dropping Villainous Ogre and Cruel Deceiver to keep his Cursed Ronin company. Kami of Fire's Roar let Jonsson make two temporary two-power fliers, but Rend Flesh made sure Ronin Houndmaster missed his connecting flight. Soh then cast Kami of Lunacy on his turn, giving him blockers on both land and air, provided Jonsson's Kami of Fire's Roar didn't put a wrench in the works. Reach through Mists from Jonsson did exactly that, letting Anton attack for four more, putting him four points away from evening the match. Mystic Restraints on Kami of Lunacy at the end of Soh's next turn finished the job.

Soh mulliganned for Game 3 while Jonsson kept a five-lander, but it had a two-drop and a four-drop, so at least he was assured of early action. Guardian of Solitude plus Hearth Kami and Kami of Fire's Roar squared off against Akki Avalanchers and Cursed Ronin, a rather asynergistic combination for the young Malaysian. Soh's situation just got worse when Jonsson played Teller of Tales and Soratami Cloudskater on consecutive turns. Jonsson used the Cloudskater ability to dig for a lucky arcane spell, in this case a Reach through Mists, and attacked with the team, knocking Terry to five and pulled .

Jonsson kept a two-Mountain hand in Game 4 after just complaining about how his previous hands would have gone on much more poorly had he been playing on Magic Online, and then plucked an Island off the top of his deck like a champ. Soh's Thief of Hope was Flamed out of the game, but Soh had a very solid curve this game, following the Thief with Gibbering Kami and Scuttling Death. Jonsson had a lot of action himself, playing a host of spirits and a Ronin Houndmaster while Soh appeared stuck for red mana. He eventually found a Mountain and cast Kami of Lunacy to go along with his strictly offensive-minded Villainous Ogre. Jonsson pushed more damage through with a first striking Brutal Deceiver dropping Soh to eight, but Terry went on the counterattack on his turn, bashing away with Villainous Ogre and Gibbering Kami. River Kaijin blocked the Ogre, but the Kami got through putting Anton at fourteen. 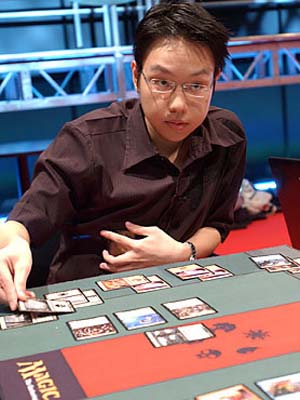 Soh's second Top 8 found him in the semifinals.

Guardian of Solitude made sure Soh's Kami of Fire's Roar would stay out of combat, as Anton swung remorsely with his men dropping Terry to three, trading while Anton's KoFR for the flying lunatic spirit. Soh wasn't about to give up without a fight though, casting Scuttles and Akki Avalanchers to try and buy some more time, and then attacking with Kami of Fire's Roar, the Ogre, and Gibbering Kami putting himself back in the game. Jonsson chose not to attack on his own turn, casting Soratami Rainshaper before passing the turn back.

Soh cast Pain Kami, and the match literally stopped for ten minutes as he and Jonsson tried to figure out how combat would play out without actually doing any attacking. Eventually Soh figured out that Smithers was the proper "cannot block" target and Jonsson chose not to use the Rainshaper to negate the KoFR's ability, but incredibly, after all of that, Soh simply chose to pass the turn without attacking. Jonsson did the same on his turn, and then cast Mystic Restraints on Soh's Gibbering Kami before Soh declared attackers.

Saying the pace of play was glacial at this point would be an injustice to how fast glaciers actually move. I'd like to take this time to give shout-outs to my peeps in the hood, tell my mom hi and... wait, the judge just have Terry a warning for slow play, so perhaps we'll see things move along now. This set Terry off, as the formerly quiet and polite kid turned into a raging maniac, tipping over the table, pushing the judge and . . .

Okay, that was just me, daydreaming after Soh pushed all his remaining men into the red zone while I waited for Anton to figure out how blocks were going down. I promise to stay focused for the rest of this match, honest.

Smithers blocked the KoFR, Brutal Deceiver blocked Scuttles, Guardian of Solitude stepped in front of the Avalanchers, River Kaijin stopped the Ogre, and Pain Kami was left to do his dirty by himself down on the end. The players stacked damage. Soh then sacrificed Scuttles to try and take out Anton's Rainshaper that was sitting on the sidelines, but Jonsson used the Rainshaper's power to protect itself, forcing Soh to cast Yamabushi's Flame on it in response to kill the flier. Because Jonsson's blocks were perfect, he left Soh with no outs and was able to attack back for exactly three, earning his first Pro Tour finals appearance.