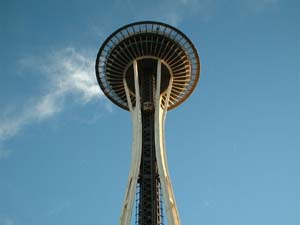 Magic has returned to its home city for the latest Grand Prix stop. More than 350 players have gathered in the Emerald City to test their Extended decks against the best. With Pro Tour-Atlanta just a week away, several of the top Japanese players have used Seattle as a rest stop on their way across the globe, highlighting an international field. Follow along all day Saturday and Sunday as Brian David-Marshall brings you inside Grand Prix-Seattle!

A quick spin around the room during round one -- of both tables with zero-bye action and three-bye play-testing -- seems to indicate that the most popular deck choices this weekend are both Grand Prix-Boston carry-overs. Lucas Glavin’s Cephalid Life deck that reached the finals is seemingly everywhere, with Osyp Lebedowicz’s Blue-White Desire deck -- the one that Lucas beat in the quarters of that tournament -- close on its heels.

Brian Kibler is one of the players with Cephalid Life. He is piloting the version Kamiel used last weekend in Eindhoven, as are most of the players. Kibler -- who has been conspicuously absent from the tournament scene for most of this season -- borrowed the deck before the tournament. It didn’t take long for his deck building juices to start flowing as he regretted not making alterations prior to handing in his decklist. “I wish I had four Meddling Mages in my sideboard so I could side them in against combo decks.”

Kibler will get a chance to put the deck through its paces starting with the third round as he found himself in the unfamiliar position of only having two byes. “First time in something like five years!”

Speaking of players who have been curiously absent from the tournament scene…Aeo Paquette made the trip down from the Vancouver area along with fellow Canadians Jeff Cunningham, Terry Tsang, and Jeff Fung. Of course, even coming to the tournament does not mean Aeo is playing. He decided instead to sleep in and use this weekend as an opportunity to prepare for next week’s Pro Tour. He is teaming with Cunningham and Mark Zajdner, and this weekend will be the first time he looks at the new Betrayers of Kamigawa cards.

Poor Jeff Cunningham. There is a possibility that Mark Zajdner -- who is battling mono -- might not be able to attend Atlanta. That would put him in the position of using the semi-retired Mike Thicke as his team’s third. That would leave Jeff in the position of captaining two players -- albeit incredibly solid players -- who have little to no experience with Kamigawa block Limited.

What has the potential to be a big story this weekend is the presence of almost half a dozen Japanese players who chose to take a detour to Seattle on their way to Boston. Tsuyoshi Fujita, Masahiko Morita, Go Anan (who actually traveled here from Boston), Shuhei Nakamura, and Grand Prix Boston winner Masashi Oiso sauntered into the room where the Grand Prix Trial and early registration was being held, much to the “dismay” of many an American Pro.

Gabe Walls was happy to see his friend but would have been content to wait a week and catch up in Atlanta. “What are they doing here? Why are they trying to Shvartsman out Grand Prix?”

Paul Rietzl was also glum. “I was so excited about this Grand Prix. I was sure I was going to win but now I have no chance.”

The only person who seemed unaffected by the presence of the cadre of Japanese Pros was Antonino De Rosa. “Who cares? I never lose to the Japanese. I am still the only player who has made the Top 8 of a GP in the US, Europe, and Asia!”

Alan Comer and Mike Fuell came over with a report of a pretty bad play during Round Two. An Affinity player attacked with Arcbound Ravager with a Disciple in play and began sacrificing artifacts to drop his opponent to twelve while conveniently getting his Ravager up to a 12/12. The only problem with that was his opponent simply activated his Goblin Welder and made the Affinity player put the Ravager in his bin for a Vault of Whispers.

Just as we are getting ready to dive into the three-bye field for the Round Four action, I have finished poring over the deck lists of all 390 competitors on Day One and arrived at the following breakdown of the field. There were exactly 50 different deck archetypes in the field although you could crunch that number down by including all the flavors of Tog (Tog, Gro-a-Tog, Scepter-Tog, etc.) into one category but you are still left with a field that has more viable deck archetypes than decks have sideboard slots to fill.

You can sort of count on playing against Mountains as RDW and Goblins account for almost 20 percent of the field. Rock decks, Desire decks, and Life Decks (both the Cephalid combo and the more traditional versions), Affinity, Aluren, Madness, and Scepter-Chant each check in at better than 5 percent of the field. Below the 5 percent mark are more than 40 different decks, meaning players should expect the unexpected all day today from Rector decks with Form of the Dragon to a Food Chain combo deck that tops out with Tendrils of Agony to Sneak Attack decks with Burning Shoal.

Round four is almost paired so we will be bringing you some actual action shortly, but you can chew on this breakdown while you are waiting.