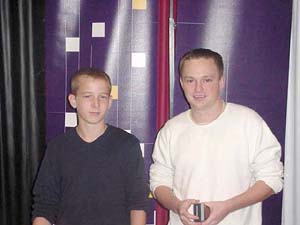 Greg Swan and older brother BradWith a scant 8 hours until GP Philly, I was asked to give a quick rundown of the local talent in and around Philly. Unfortunately, much of the Philly scene is either casual, or dependent on NY or MD for competitive play, but there are a few names you may have heard of and a few that may be new to you, but that have the potential to make some noise this weekend (or in the future!).

Perhaps the best-known local player is Brad Swan, who has been a pro tour regular for the past couple of years. With a plethora of pro tours under his belt, including a top 8 in Barcelona, Brad adapts to new limited formats at an alarming rate, and is always a dangerous player. His father, Tom "Papa" Swan, while not as consistent a player as Brad, nevertheless has an individual limited Grand Prix victory (Boston) and almost always comes to play with his unorthodox card valuations and play style.

One talented local player that you may not have heard of is Jordan Berkowitz. Jordan, 16, has been on a hot streak as of late qualifying for PT Houston with a Solitary Confinement deck in block, and qualifying in the second week of this season for PT Chicago in a difficult Neutral Ground (NY) field, winning a top 8 in which every player had Pro Tour experience. Between his two PTQ victories, Jordan picked up three byes at a GP Trial, and is poised for a good showing this weekend if his mana doesn't let him down.

Perhaps the strongest player you may not have heard of, unless you are from the Northeast corridor, is Tom Kelleher. Tom, an attorney, and a regular on the late night money draft circuit, plays very solid magic, often utilizing underrated cards during a new set's youth. He repeatedly drafted a junky looking RB deck during day two at GP Dallas (relying on late picks such Rogue Kavu, Nightscape Apprentice, Hate Weaver and multiple copies of underrated cantrips Recover and Zap) to a top 16 finish, and has carried a limited rating in excess of 2050. Tom also picked up 3 byes for GP Philly by winning an Odyssey based GP Trial, and has the potential to shine this weekend if he is on top of his game.

One other local has cracked the vaunted Pro Tour Top 8; Paul Ferker, now assumed to be retired, made the quarterfinals at PT Paris years ago (the format was Mirage block constructed.) He has been seen on Magic Online lately, so there is a chance he'll dust off his pro game and show up. 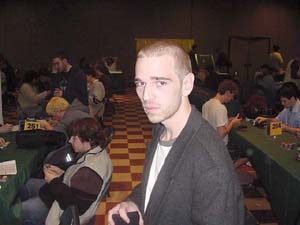 Rich FrangiosaOther local players with quality GP or PT experience include Ed Linskey, with a top 16 finish in GP Detroit (2 byes on rating), Chris Manning, formerly of Boston and with connections to YMG (rated in excess of 1900 and staggeringly consistent), who is attending school in Philly, Dan Bridy (Top 32 in GP Milwaukee at the hands of a mirror match loss to Brian Kibler), Scott Landis (with number of pro tours and two solid Nationals performances) who has made top 8 in every Onslaught event he has played this season, the ever lovable Richie Frangiosa (Gle8 on IRC), a one time Pro Tour regular coming off a work-imposed year long magic hiatus and yours truly, Jon Becker, formerly of powerhouse team Tongo Nation (and posterboy for Chronic Mana Difficulty) with a Worlds '98 appearance and seven pro tours – I'll be the one with the tiny good luck (s)Ting Ray on my head.

Finally, while no longer Philly-ites, Matt Urban, known almost as much for his trademark Hawaiian shirt and fearlessly grafitti'd up unsleeved heavily-Beta five-color deck as for being a team Rochester savant, has the ability to score a quality finish if he decides to come for other than "the times," and everyone's favorite Miser, Michael J. Flores has been tearing up Onslaught draft for the past couple of weeks, and if he can parlay his single bye into day two, is confident in his top 8 chances.

Well, that's a brief overview of a handful of the locals – come on out and see if you measure up!

Oh! And don't forget to get a Pat's King of Steaks (Downtown at 9th & Passyunk) while you are here (do NOT got to Geno's across the street), and be sure you get Whiz instead of Provolone. "Extra Whiz Wit" (Cheese steak, extra Cheese Whiz, with fried onions) are three of the best sounding words in the Philadelphian's vocabulary.