Before the orchestrated chaos of eight rounds of swiss could take sway, players gathered in the tournament area to relax, mingle, and gear up for the long day ahead. To bring you closer to the Grand Prix experience, Sideboard Online scribes have brought you this snapshot of the calm before the storm. 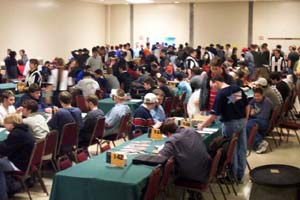 First off, people are everywhere. Milling in between and crowding around tables, poring over trade binders, hurriedly scrawling a half-baked decklist in the hopes their audible will speed them to Day 2. The law of supply and demand jacks up the price as the tournament start draws closer. There are some serious deals to be had if you find the guy who's just one Deed short of a Rock deck (literally or figuratively). The other half of the bedlam is players trying their hardest to scout every deck in the room. You can't flash a card without ten pairs of eyes trying to pull maximum information from it. All this leads to a frantic exchange of cards, information and disinformation that only settles when the final five minutes demand that players hammer out their final lists. 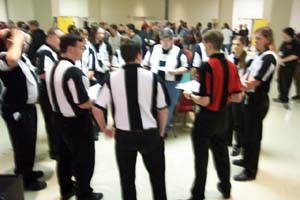 Here we see Collin Jackson reviewing some last-minute pointers with his staff of diligent judges. He walks them through a list of expected rules pitfalls and common questions. He also psyches them up for the big task ahead. There may also be a motivational chant and secret handshake, but those could just as easily be malicious lies spread by the enemies of the judges. Nevertheless, matching outfits ensure camaraderie. 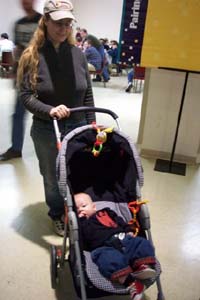 How adorable! Ryan Dougherty, son of Rob and Krista boasts his allegiance to the red and black. Cole Swannack may soon have competition for youngest Pro Tour competitor. 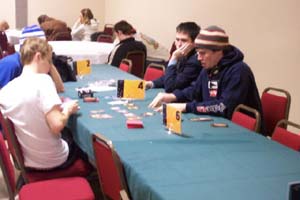 Pro Tour Heartthrob Brian Kibler takes his latest wacky creation through one last test run. As you can see by the expression on his face, things are not going as predicted. Hopefully this last-minute lesson will prove its worth in the tournament proper. 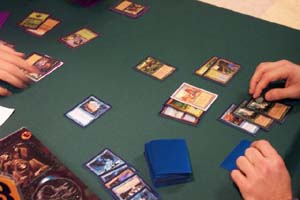 It doesn't matter who's steering those cards, expect to see a lot of this matchup his weekend. Interestingly, the two decks represent different eras of green. The Rock is green's old-school flavor, with Yavimaya Elder, Wall of Blossoms and Treetop Village, along with the classic duo of Llanowar Elves and Birds of Paradise. Blue-Green has the modern green package: Undercosted Basking Rootwallas and Arrogant Wurms, and the best two drop ever, Wild Mongrel. 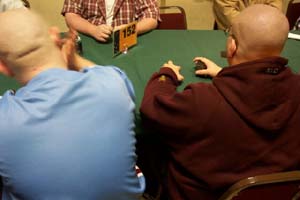 Separated at birth, or hero worship? PTR and Alex Borteh declare that bald is beautiful. 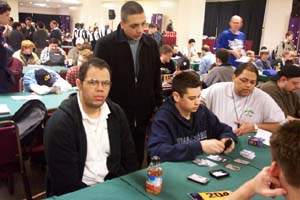 Osyp Lebedowicz throws on thug styles to dissuade the paparazzi. This international superstar had threatened to leave the game behind for his fast life as a male model, but as you see here, the lure of competition proved too strong. Associate and Pro Tour Finalist Gerard Fabiano stands ready to break knees, if need be. 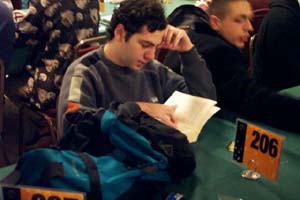 Here's a surprise! Invitationalist Diego Ostrovich at a North American Grand Prix! The sole member of Bandana to make the trek to New Orleans, Ostrovich is ready to take the town by storm. That is, if it doesn't take him first. Let's hope he can resist the pull of Bourbon Street long enough to make Top 8.