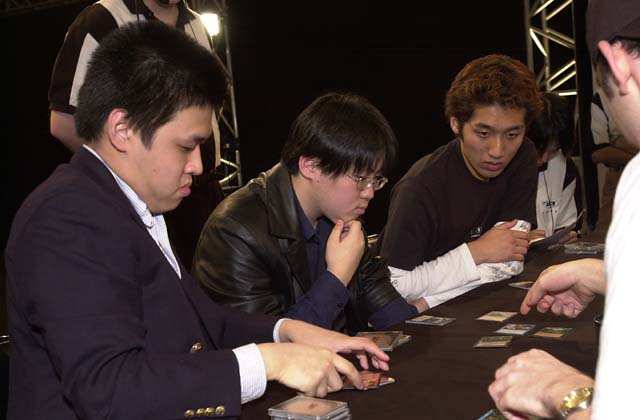 If you didn't know much about Panzer Hunters, you probably wouldn't realize that this Japanese Magic team would ever be in the position to be playing for $60,000 against Pro Tour luminaries like Chris Benafel, Noah Boeken, and Ryan Fuller. Momose Kazayuki, Itaru Ishida, and Reiji Ando have only been playing together for a short time, with four tournaments under their belts, and with only one of their players having been on the Pro Tour before.

Itaru Ishida is the team's real powerhouse, with Top 8 performances in Grand Prix Taipei, Manila, and Tohoku. His best Pro Tour finish to date was in Los Angeles in 1998 where he finished 13th. Momose comes in with two Grand Prix Top 8 from Tohoku and Sapporo. Reiji Ando has played in only a single Pro Tour. While Panzer Hunter has quite a bit of experience playing in tournaments, compared to their opponents, they don't have a lot of experience in high stake events. After the draft, I asked them what they thought of playing against such talented opponents, and they seemed confident.

"We're ready for them, I think," said Itaru Ishida. "I think that my deck is slightly better than Noah's, and I have good cards for our matchup. My fliers, Obsidian Acolyte, and Samite Elder will be key. For the others, I think that they are close, but they have powerful cards like Pyre Zombie and Darigaaz."

Momose Kazayuki seemed really comfortable with his Black/Red/Green deck. He started the draft looking to go into his favorite color, Black, and opened a Darigaaz early to go with his deck. "I know this color, and then I got to have a really powerful card for the deck. My deck is nothing special really: just a good Black/Red/Green cards with the one Darigaaz to give it something."

Reiji Ando was also pleased with his deck. "Red is my favorite color. In the second pack, I opened Pyre Zombie. It is a very good card."

These two less experienced drafted very well, proving that they knew the colors they so loved. Part of their success, they felt, came from really understanding their chosen color. "When you have to make choices between two good cards, sometimes you just have to know," said Reiji. Reiji and Momose's innate sense of what was good for their decks was always being guided by Itaru Ishida, who helped focus the team on difficult decisions. Their formula paid off, as Panzer Hunter swept into the finals.

"We hope to win to inspire Fujita," said Momose. "We know that if we win this, it will help encourage him and let him know that he can do it too. It will be very exciting if the Japanese can win both events!"

None of the players were quite sure what they would do with the money if they win the event. Itaru Ishida probably had the most ambitious idea though. "If I win, it will be very good for me. I can probably go to more big events with the money, and I hope to be able to keep winning."