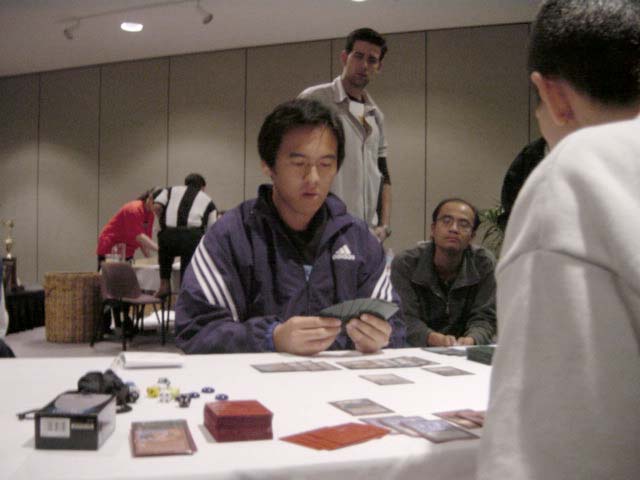 After gaining a spot on the Australian National Team Wei Ren Khoo playing blue/white control squared off against Cael McGann playing Fires to determine who would be placed 3rd and 4th respectively. With all the stress lifted from qualifying both players seemed more relaxed in this matchup. Needless to say the competitive natures and will to win was still present.

A Fires versus Blue/ White control matchup tends to favor the control deck, yet the speed and consistency of Fires still makes the match anyone's game. Winning the coin toss Khoo elected to play first. Playing lands in the first several turns little happened as Khoo readied himself for Cael's offensive. Playing Fires followed by an Idol, Khoo responded with a Thwart on the Idol. The game was in Khoo's favor with Khoo effectively countering all of Cael's threat while drawing cards with Accumulated Knowledge, not once but three times. Cael's three Blastoderm was again countered leaving the board empty. Dismantling Blow further gave Khoo massive card advantage until he found his Binding Angel. With that Khoo slowed began to set Cael on a clock. Unable to draw any answers to the Angel, Cael was on four life before conceding the first game. 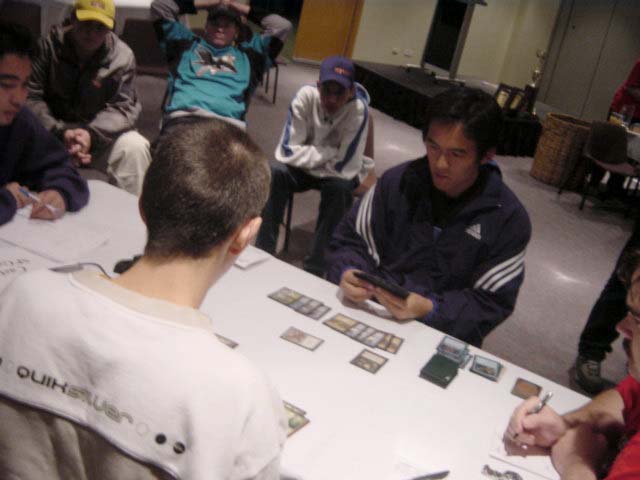 Game two was a different story and very one-sided game. With an amazing draw Cael made short work of Khoo. A first turn Elf was followed by a second turn Fires, a third turn bird helped play a fourth turn Ku Chameleon with haste thanks to Fires. Cael's fifth turn saw another Kavu Chameleon enter play. With a handful of counters and no way to stop the onslaught, Khoo gracefully conceded.

Not wanting another repeat of the previous game Khoo kindly ask for a peaceful game. The early turns saw little happen on both ends of the boards with only lands being played. This was exactly what Khoo wanted paying him time to set up. Cael, on the other hand, had a slow start. An early Fires was countered before Cael played two Boils which Khoo effectively countered. An Ancient Hydra was immediately dealt with in the form of Wrath of God. Another Hydra was again Wrathed the turn after it entered play.

The game took a different form, when low on cards, Khoo played Dismantling Blow on both his webs with kicker gaining a distinctive card advantage. Finally drawing an Binding Angel with counterspell backup Khoo impulsively played the Angel tapping too much white. This left Cael on opening with his Port to tap Khoo's remaining white. Casting a Flametongue Kavu, which was Thwarted, Cael played another Kavu. Regretting his mistake for tapping the wrong mana, Khoo began to double-check his mana.

With a sizeable hand from all the card-drawing spells, Khoo soon drew his second Angel. With no answer to the Angel and his creatures effectively useless, Cael needed an answer. Khoo on the other hand had the game set. Casting a recall for three and discarding three land, Khoo was in a good position with another Angel, Absorb and Thwart. With six cards in Khoo's hand, most of them countermagic Cael conceded.