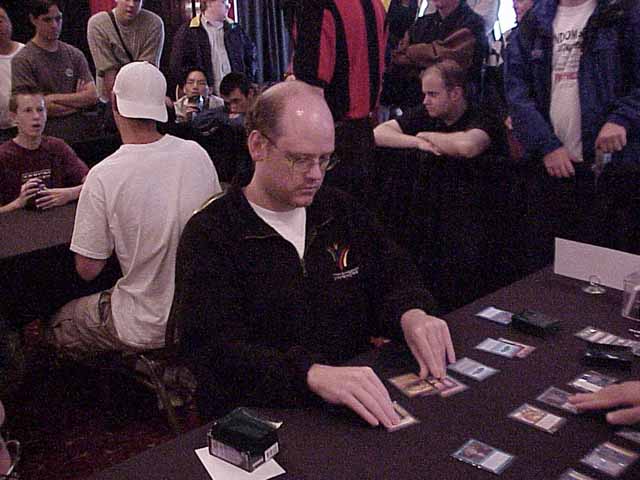 Both players were quiet while they prepared to start this match. Although the focus of the room was on the Finals between Ryan Fuller and Murray Evans at the next table, both those players already knew they'd be representing Canada at the World Championships in Belgium in August. These two men were playing for the chance to go to Worlds at all. Both playing monoblue, they also knew that they were in for a long grueling match.

The tone was set in the first game. Both players managed to get a reasonable amount of mana into play, although Gurney's Dust Bowl took out two of Tsang's Rishadan Ports. After ten turns of cycling and Grim Monoliths, Tsang made the first move: Morphling. Gurney paid for Foil, but Tsang had a Counterspell ready. Gurney took advantage of Tsang being tapped out by playing a Masticore, but Masticore just can't dominate the game the same way a Morphling can. Over the next six or seven turns, Tsang's Morphling managed to get in 20 damage.

During sideboarding, both players were still very quiet and very focused on the task ahead. Tsang took out his Masticores and brought in 2 Quashes and a Scrying Glass or two. Gurney also took out his Masticores for 3 Stronghold Machinists (the Machinist's ability is: 2U, T, Discard a card: Counter target noncreature spell.) and a Scrying Glass of his own.

The feeling of the match changed dramatically a few turns into the second game. At the end of Gurney's fifth turn, Tsang played a Stroke of Genius to draw one card. When Gurney attempted to do the same at the end of Tsang's fifth turn, he joked that Tsang should let him get one off, too. Tsang wasn't in the mood to trade. He used a Quash to counter the Stroke, remove the other two from Gurney's deck, and get a good look at his hand: two Counterspells, Daze, Annul, and Morphling. Tsang only had one untapped island left at that point, but Gurney wasn't willing to risk getting his Morphling stolen so he didn't play it. Tsang played a Powder Keg on his next turn so he could start building up counters. A couple turns later, Gurney played the Morphling, leaving an island up to protect it, but Tsang answered with a Morphling of his own. We had a stalemate. Tsang finally got in one Morphling hit (for 3), and then used his Keg to get rid of both of them. On the same turn, he played another Morphling, Gurney played Counterspell, Tsang played Counterspell, Gurney played another Counterspell, and Tsang ended the counter war with a Miscalculation. The Morphling stayed. Gurney wasn't able to get enough counters on his own Keg to deal with the Morphling, and lost a few turns later.

In the third game, Gurney played the first threat on his seventh turn: a Stronghold Machinist. Tsang played Counterspell, and Gurney responded with a Counterspell of his own. Tsang only had one mana available, and the Machinist was really bad for him, so he picked up three islands for Thwart: no Machinist for you! Gurney also somehow managed to take a point of mana burn during the exchange, and he was not happy about that. 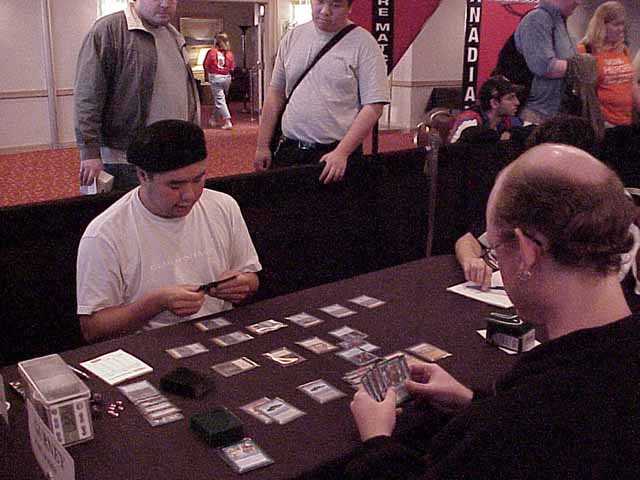 At that point, Tsang had only an island and a Rishadan Port in play. He spent the next few turns replaying his islands while Gurney couldn't draw anything more threatening than a Faerie Conclave and a Grim Monolith. Gurney finally played a Stroke of Genius on his own turn, leaving three mana untapped. Tsang had the Quash again, but Gurney had a Foil. Then Tsang picked up three islands again for his second Thwart of the game!

Gurney got in a few hits with the Faerie Conclave while Tsang replayed his islands. Once he got up to six islands, Tsang tried to play a Scrying Glass. Gurney played Counterspell, Tsang played Rewind, and then Gurney picked up three islands for Thwart. He stopped the Scrying Glass, but that Thwart was the last card in his hand. When Gurney played a Rishadan Port on his next turn, Tsang knew he could play Morphling with just one blue mana up. Gurney played nothing but land for the rest of the game.