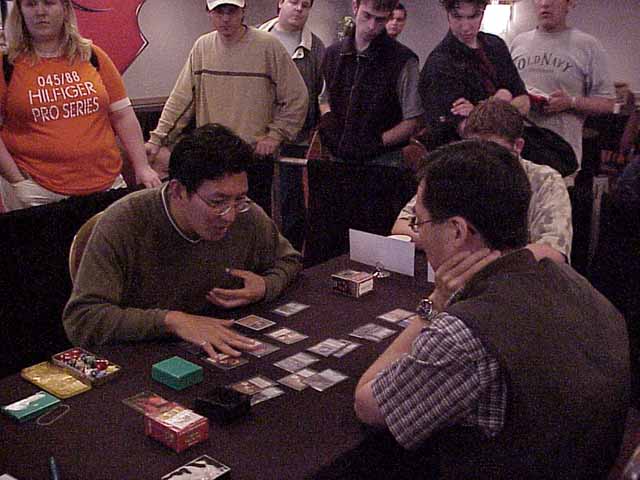 This matchup featured Terry Lau of Richmond, BC, against Sam Lau of Scarborough, Ontario, playing for a slot on the Canadian national team. These two players seemed very relaxed as they sat down for what was sure to be an interesting match of Sam's Accelerated Blue deck , against Terry's monoblue Tinker variant. This matchup seemed to be about which player got to play his game: either Terry would run over Sam with fast mana, or Sam would be able to counter key spells and ride Morphling to victory.

Terry stalled on two Crystal Veins, while Sam, with no shortage of land, played a Powder Keg. Terry got out a third land and a Metalworker, but Sam had a Treachery ready and took it on his next turn. Terry played another Metalworker on his next turn, but Sam has another Treachery ready, and takes it as well. Terry finally got a fourth land and played a Thran Dynamo and a third Metalworker. Sam was forced to allow it to enter play, and continued attacking with the treacherous Metalworkers and a Faerie Conclave. Terry's turn showed the explosive power of his deck, as he used Metalworker and Voltaic Key to generate enough mana to play a Phyrexian Colossus, which was countered, and a Masticore which entered play. This was very bad for Sam, as his creatures had one and two toughness, and were killed shortly afterwards by the Masticore. In an attempt to find an answer to his situation, Sam cast an Opportunity at the end of Terry's turn, but Terry tried a Stroke of Genius for four in response. This was Thwarted, and Sam returned three islands to his hand. However, from the Opportunity and subsequent draws afterwards, he could not find another Treachery for the Masticore and conceded.

Sam Miscalculated a Metalworker Terry played using a Grim Monolith. Terry tries another Metalworker but it's countered, too. Then Sam played a Powder Keg. Neither player did anything until finally Sam was forced to Stroke for one at the end of Terry's turn to get a land. Sam played a Grim Monolith, and then he made his move. He played a Palinchron, then another Monolith and a Morphling. At that point Terry looked over the board and then conceded.

Terry played first, and mulliganed. He played a land and a Voltaic Key, and on his second turn he played Crystal Vein, sacrificed it, and played a Monolith. Using the mana from the Monolith he Tinkered it away to go for a Phyrexian Colossus which would quickly win him the game. There was only one problem: Terry had accidentally sideboarded out all of his Colossuses! He was forced to get a Thran Dynamo so he wouldn't fall behind on mana development. They both played land for several turns, until Terry played a Defense Grid. Sam countered the Grid, but Terry was able to force through a Tinker to get Mishra's Helix. Unfortunately for him he couldn't tap enough lands to prevent Sam from playing a Powder Keg. They played land for a few turns as the Keg accumulated counters, and Terry played a Tangle Wire. Sam played a Stroke for four on his upkeep using the lands he'd have to tap anyway. He used the Keg to destroyed the Helix on his next turn, and then the turn after that played a Palinchron and a Morphling. Terry promptly conceded. 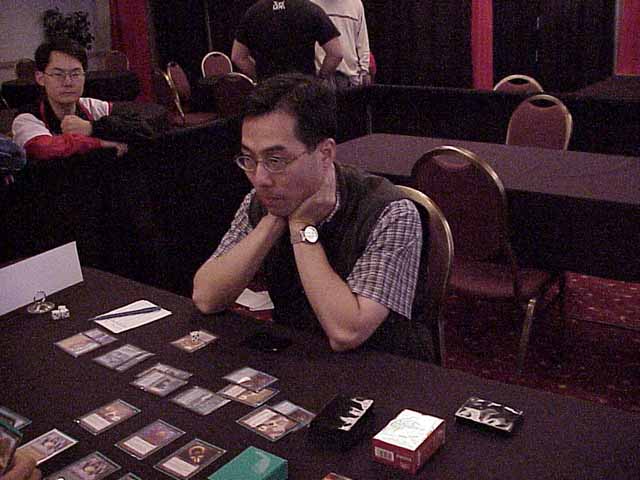 Sam Annulled a Grim Monolith and countered a Tangle Wire, but Terry still forced out a Defense Grid and another Tangle Wire. Shortly afterwards, Terry played a Helix, and it looked like Sam was going to lose. After Terry tinkered for a Phyrexian Processor and paid ten life, no one in the room felt Sam had more than a remote chance of surviving. But then Terry made a mistake, and when Terry went to untap a Dynamo with Voltaic Key so he could make a 10/10, Sam used his Powder Keg to destroy the Processor and Dynamo in response. This was devastating to Terry, as his main route to victory condition was gone, and now Sam was getting enough land to play around the Helix. He got out a Stronghold Machinist, and even though Terry still had control, he could not produce a threat. Seal of Removal and Grim Monolith came into play soon after, and Terry was in big trouble. In an attempt to delay the inevitable, he Tinkered for another Tangle Wire, but it didn't stop Sam from playing the Morphling in his hand, and Terry conceded with no way to deal with the Morph.

Sam Lau took the match, and the final spot on the Canadian National team.