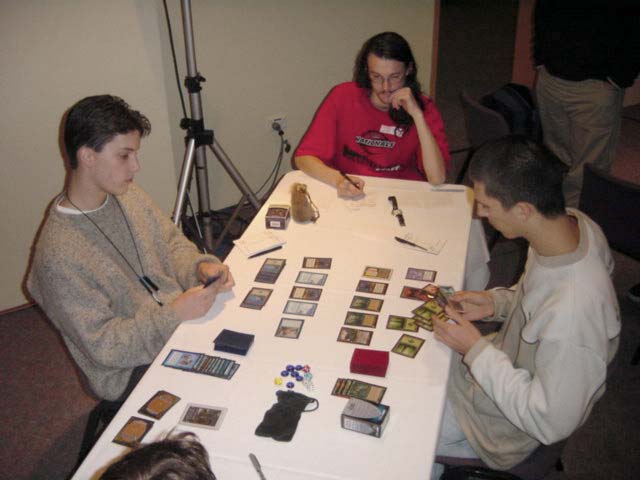 After losing their first finals round, both Grain and McGann need to win here or they face elimination from the top 8. The matchup should favor McGann as he is the one playing the Fires deck.

Cael played a first turn Llanowar Elf while Grain chose to cast a first turn opt, keeping the card on the top of his library. With a second turn Fires Cael looked like he was setting himself up for the Fires "God draw" but on the third turn he matched Grain's Airship with a Chimeric Idol. When Grain then tapped out to cast a Troublesome Spirit, he decided that it would be wise to Foil McGann's second Idol. McGann untapped and cast a Saproling Burst, which forced Grain to scoop up his cards.

Starting off the game exactly the same way, McGann cast a first turn Elf while Grain cast a first turn Opt. However on turn 2 Grain submerged the Elf, forcing McGann to recast it on turn 2. Grain then cast Rishadan Airship on his turn 3 but McGann used Simoon to remove it. The Airship cast the turn after met with the exact same fate as its predecessor. Searching for something new to cast Grain played Gush, floating two mana and dropped down a Chimeric Idol. McGann dropped a Fires and then served the turn after with a hasted Kavu Chameleon, but Grain was able to slow the bleeding with a Glacial Wall continuing his own beatdown with the Chimeric Idol.

McGann managed to push through more damage by dropping another Chameleon but again Grain had the answer in a Glacial wall, effectively locking up the board. Tapping out to drop his second Idol, Grain was forced to Foil a Blastoderm to prevent McGann from getting through any more damage. Grain then Gushed again and began his air assault, summoning a Troublesome Spirit. After drawing nothing but lands and Elves for the next 5 turns McGann was forced to concede game 2 and the two moved onto game 3. 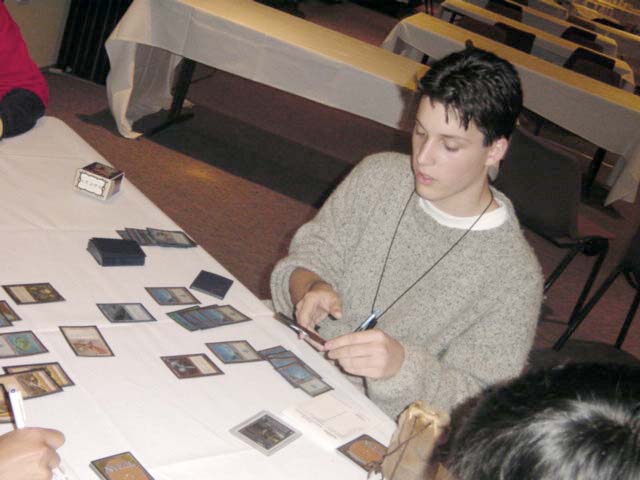 Starting first for the first time in the match McGann opened with another first turn play, this time a Bird of Paradise. When on turn 2 McGann cast a Fires it looked as though he was going to get an amazing draw just like he had in game 1, but again Grain had a submerge for the Bird, slowing down the pace of the McGann offence. When Grain tapped out to cast a Rishadan Airship, McGann saw an opening and cast a Saproling Burst, but once again Grain had the Foil, pitching a Troublesome Spirit.

Grain then untapped and brought down a Spiketail Hatchling but unfortunately for him it was not enough to stop the Flametongue Kavu wrecking his Airship. Running desperately low on cards Grain cast a Troublesome Spirit but was forced to block with it as he refused to race against the speedy Fires deck. McGann Washed out for green to further delay McGann and began the assault with the Spiketail Hatchling, however after replaying his board McGann dropped a Blastoderm and a Chimeric Idol and Grain Scooped em up.