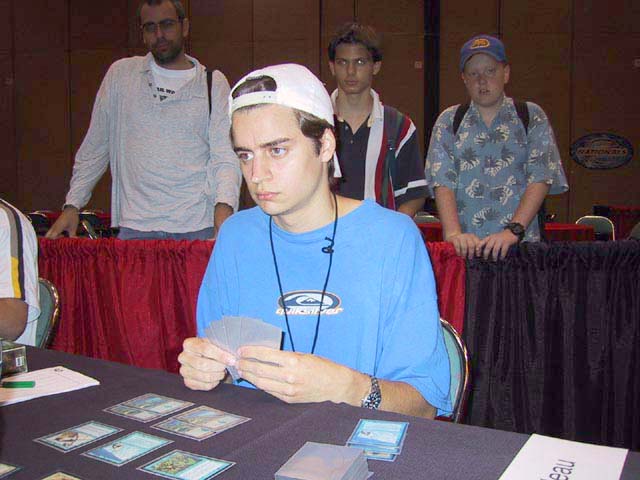 Two players were undefeated going into Saturday: Terry Tsang and Louis Boileau. While Terry Tsang may be a better known player, Boileau has shown that he is more than capable of doing well at major events. He placed in the Top 8 of Grand Prix: Detroit, which was Invasion Limited. Add this to his undefeated record on Friday, and it becomes apparent that the eighteen year old student from Montreal has quite a bit of talent at Limited.

So what is his strategy? "I stay out of neighbors' colors, stick to my colors and don't try to cut my opponent's off . . . I give them presents so that I end up with a pretty decent deck." He may have had Limited taken care of, but there was still the matter of Standard on Day 2. He decided to go with Opp-Orb. "I had no idea of what to play, so I just played what I've been using for the past two months. I played (the deck) a lot, and I was confident with it, so I figured I had a good chance to Top 8."

When I interviewed Boileau, he was coming off a loss against Jason Simard's Crosis-Go deck. "He smashed me . . . he had a lot of good cards against me. Teferi's Response maindeck can kill the Opposition, plus his sideboard was nuts against me. Juntu Stakes totally wrecks me" He was still optimistic about his chances later, as "Anything isn't such a bad matchup compared to Teferi's Response.dec"

Louis isn't looking to Worlds just yet, but is happy to have the opportunity to make the team. "Look who's in the top 8, lots of really good players. If I can make the team with good players like Terry Tsang and Gary Wise, that would be great." Judging by his performances lately, Louis would certainly be a solid addition to the Canadian National team, where his drafting skills would go a long way towards Canada winning a second title.