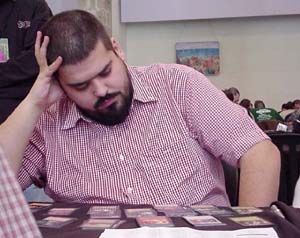 The last time I saw Lucio Moratinos he was battling Nicolas Labarre for a spot in Grand Prix Biarritz' final. The Spanish put up a very good fight with his friends egging him on. Despite that, Labarre's cool prevailed over Moratinos' gutsy determination. A few months later, at another Limited Grand Prix, Lucio is ready for another run. He came into the tournament with three byes and for once he didn't need to travel to the event since he lives in Barcelona.

All of this made him a prime target for our deck construction coverage. After an extremely thorough double checking of the pre-registered cards (something we should all do to avoid problems) Lucio came to the quick conclusion he had a difficult problem to solve: he had too many good cards.

It might sound stupid but the main problem was the mana base. His green, black and blue cards were very strong but they all demanded too much from the lands. But before we dwell into that let me run down his best cards for you.

As you can easily see red and white quickly turned into cheerleaders. The problem is pretty clear as soon as you try to come up with a mana base that allows you to maximize Mutilate, support Elephant Ambush and still squeeze two blue mana for Persuasion.

Like any Latin player in the midst of fellow compatriots - there are over five hundred Spanish players scrambling to build a deck around here - Lucio let his emotions show as he searched through the card piles looking for any lost treasures or an answer to his problems. After a few minutes his "deck worthy" pile was small enough to build the famous mana curve piles. Here is how they turned out:

Twenty-five cards. With such a high mana curve, and demanding mana base, Moratinos would certainly need seventeen or eighteen lands. So he would need to cut two or three cards from this list. Normally these last few cuts take a long time, and can often be quite decisive, and Moratinos took his time. At first he seemed inclined to even had one extra card to the equation: Krosan Constrictor.

After much internal debate he decided to cut the Krosan Archer (although trading it for the Constrictor) and the Windreader (reducing the need to produce two blue mana). Finally the Constrictor traded back with the Archer and Moratinos reached for his lands. Apparently he decided he would play with twenty-four spells (maybe going up to forty-one cards with seventeen lands).

When he finished his mana base the gambit became clear: he had decided to further worsen his mana problems by playing only sixteen cards. A very risky choice that might put him in more trouble than he can handle. As he handed in his list Moratinos' comment perfectly summed up his deck: "The cards were great. If I draw the right mana I can't be stopped. If I don't things will get tricky."