ere's the overview of what colors everyone drafted and how they did in the pod that was featured on the draft viewer. 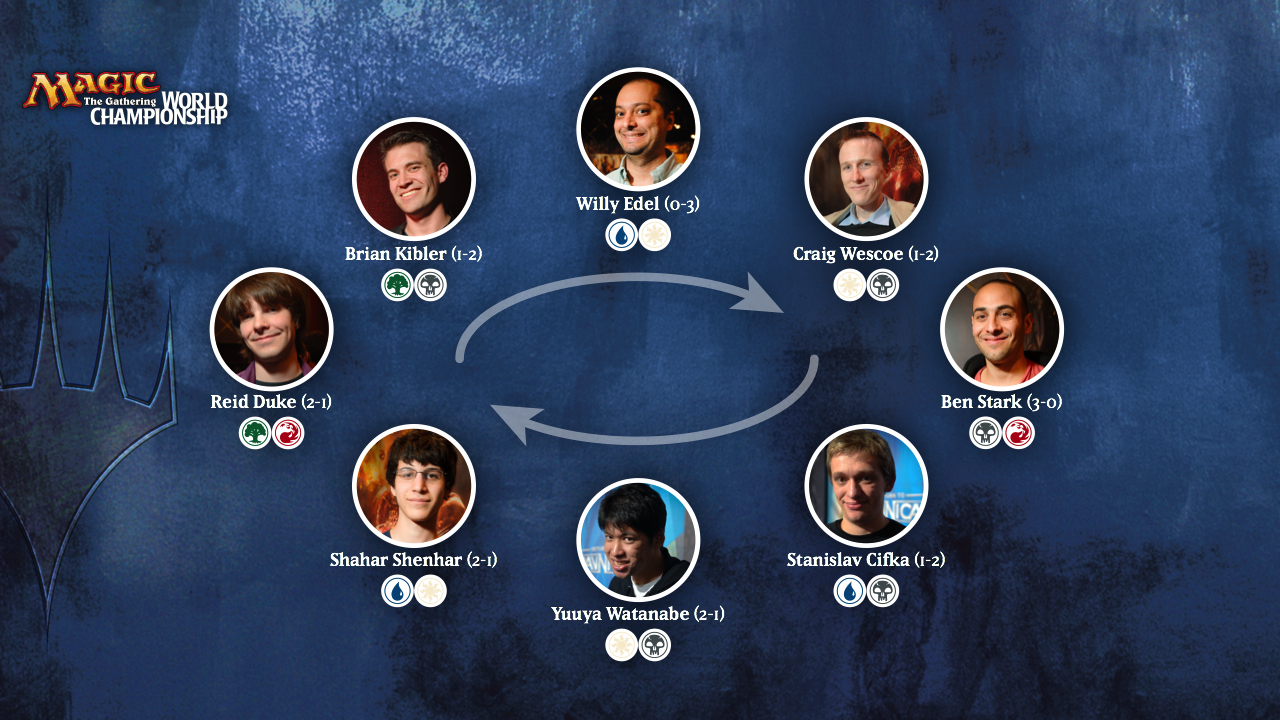 Hall of Famer Brian Kibler is known for many things: his Pro Tour trophies, his striking smile, and his ritual of picking a song for every tournament to listen to before each round.

For the World Championship, Kibler selected "Clarity" by Zedd. All week, he had been jamming to it on his headphones. "It's one of my favorite songs right now. Perfect energy, good build, sweet chorus," he said. 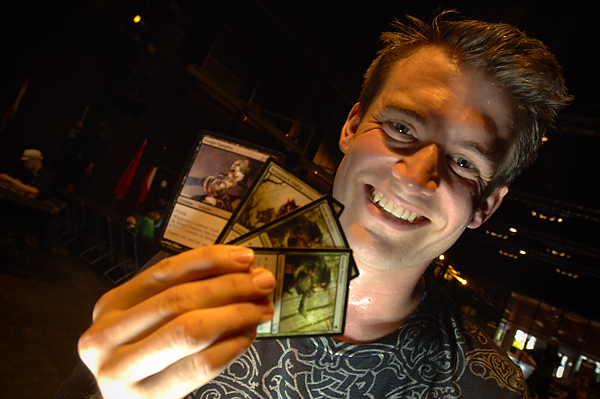 Brian Kibler, known for having a "song" for every event that he listens to before each round, had been playing "Clarity" by Zedd throughout the weekend... as all the other World Championship competitors learned round after round.

All week, Kibler has had a somewhat loud volume set on his headphones. Typically, that wouldn't be a big issue, but because the relatively empty hall is quite silent, all World Championship competitors have been able to hear Kibler's song being played over and over again. Ben Stark in particular was horrified that Kibler was listening to the same song all the time. "The song is fine; it's just strange that we're hearing it for the nth time," Stark said. "I mean, not even a new song for Day Two?"

Apparently not. Kibler arrived at the draft with the same song pumping through his headphones, and this got quite a few laughs out of the players. While they were waiting for the go-ahead signal from the coverage staff, Shahar Shenhar suggested that Kibler might as well put it on speaker so we can all hear it. Kibler obliged, and this produced a funny sight: eight players sitting and waiting at a table, all listening to the same song, and dancing in their chairs.

That was the only moment when Kibler put his song on speakers, though. "The main purpose of the music is tuning out everything else, so I don't get distracted. It helps me focus," Kibler said. The music didn't really aid him during the draft, as he only managed to win one out of three matches.

The person who won the pod was the one who was horrified by the monotony of Kibler's music habit: Ben Stark.

Ben Stark managed to go 3-0 in this pod, and I sat down with him to get his thoughts on the draft.

"First pick first pack, Banisher Priest was the best card in the booster, but I had Craig Wescoe to my right, who almost always plays white. So, I went with Claustrophobia instead," Stark said. "My second pick was also very difficult. I am not sure how good Enlarge is, especially with instant speed removal and bounce spells in the format, but I took it nonetheless. I then took an Act of Treason third. The format revolves around mid-sized creatures, and Act of Treason is excellent against those."

After that, the red was flowing, and Stark rounded out his first pack with a bunch of red cards, in addition to a Bubbling Cauldron and a Vampire Warlord that would go well with his Act of Treason.

The next difficult choice came in the sixth booster of the second pack: Stark faced the choice between Rumbling Baloth over Shiv's Embrace. "At that point, I was considering going mono-red," Stark explained, "but I already had Enlarge and also picked up a Kalonian Tusker early in pack 2. So, there was a chance I would go Green-Red. I don't even like Shiv's Embrace all that much because everyone has Disperse, Pacifism, and so on. Rumbling Baloth, on the other hand, is an impressive creature. My regret for not having Rumbling Baloth if I would end up Green-Red would be greater than my regret for not having Shiv's Embrace if I would end up Mono-red, so I took the Baloth," Stark explained.

After that, Stark did not receive any more notable green cards, and the eventual deck he registered was nearly mono-red, only splashing two black cards. He splashed black over green because his black cards, Vampire Warlord and Gnawing Zombie, only cost a single black mana, whereas his best green cards all cost double green. Moreover, the black cards allowed him to sacrifice a creature that got stolen by Act of Treason, one of his two Dragon Eggs, and his Pitchburn Devils. 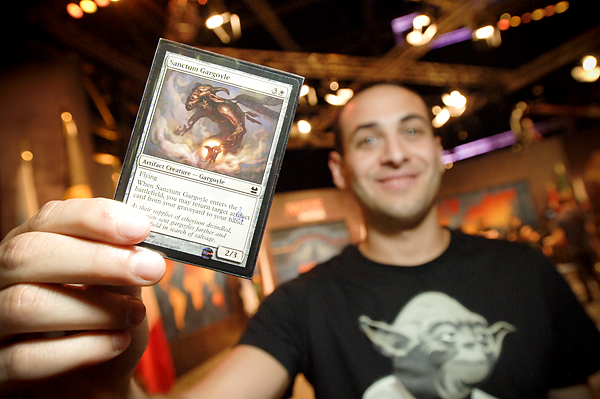 The M14 draft was yet another example of the sheer mastery that Ben Stark displays in Limited.

Stark's consistent mana, correct read that red was under-drafted at the table, and sacrifice synergies provided him with an impressive 3-0 in M14 draft. This brought him to a 6-0 record in the two draft portions overall. There's a reason why Stark is considered by many to be one of the best Limited players in the world.

With eight amazing players sitting down at the draft table, one of them has to end up with the dreaded 0-3 record. In this pod, Willy Edel was that player. If you watched his draft on the draft viewer, this might surprise you, as Edel managed to pick up three amazing mythic rares: Archangel of Thune; Jace, Memory Adept; and Windreader Sphinx. So what went wrong? 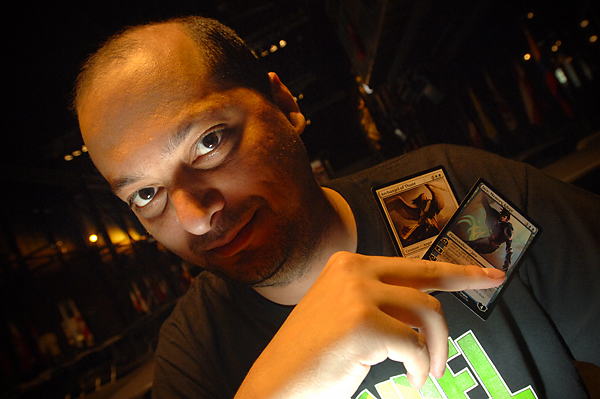 Willy Edel's notable mythics were unable to carry him through the M14 draft with a single match win, primarily due to some regrettable picks throughout the draft.

According to Edel, the blame fell on himself. "I made a lot of mistakes in my picks. Most importantly, my curve was way too high. I was taking Siege Mastodon over early drops, which I greatly regret. Also, I picked Illusionary Armor and Auramancer too highly. I thought they would make for a good combo, but my deck was not aggressive, and those cards don't help me survive until my mythic rares can take over. Similarly, I mis-valued Path of Bravery. It might be good in an aggressive deck, but not in my mine. I've been boarding it out all the time."

"It's not the best time to learn," Edel said despondently. But at least he could look on the bright side. "I now know what to avoid in the M14 Team Sealed Deck portion tomorrow."