Magic Online and the Pro Tour

The release of Magic Online last year brought with it the requisite predictions of Magic's imminent demise. It also brought a common ground for professionals and amateurs to game against one another. Sign up for a draft and you might find yourself sitting next to Anton Jonsson, Bob Maher, or Rob Dougherty. A lot of pros go on once in a while because they like to game and it's a convenient alternative, but there are others who see it as a way to get in more practice and test for upcoming events. I talked to a few pros that play online often and asked them how much influence Magic Online has had on their preparations for this Tour. 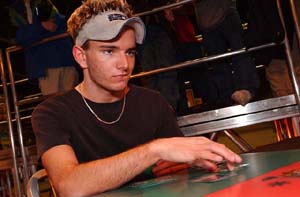 You can't really talk about pros and Magic Online without talking about Nick Eisel. The top-ranked Limited player online, Eisel has become the poster boy for the new generation of professional Magic players. Surprisingly, Eisel downplays his testing on Magic Online. He says it's important to keep playing Magic, just to keep your skills sharp, but that Magic Online is a lesser alternative to getting together with the big shots at CMU-TOGIT.

The man they call "J.T. Money" loves Magic Online. He plays a lot, so much that to mention it would make it seem like he's invented a new kind of day that has more hours in it. For Reeves, the key to Magic Online is that it lets him play as much as he does. That much practice lets him have a sounder grasp of what cards are important to what archetypes. The example he gives is that early on he would simply value Mistform Dreamer over Mistform Wall, but in blue-red, he's learned that the Wall is a better pick. In blue-black it switches. Your deck is more often about the race, so a two-power evasion creature on turn three makes sure your deck will be able to push through enough damage to win with Tethers or Dirge.

The Silent Assassin says that how much Magic Online he plays depends very much on how much he's winning. When he's streaking he's eager to keep playing, but a couple of bad performances can have him switching gears and clearing his head. Also, he sees it as a convenience more than anything else. When he can't muster troops for a traditional draft, he'll power up his computer. For Thoren, the advantage Magic Online has given him is the ability to experiment with a number of different drafting strategies, opening his eyes to possibilities he might not have seen otherwise. He also said that the game's enforcing of the rules makes sure that he knows how different cards, citing the first time he had Soulless One with no zombies in the graveyard and cast Shade's Breath as an example. He might not have realized, otherwise.

Stark has a reputation as a bit of a Magic Online fiend. He doesn't deny that he loves to play, and says Magic Online is a great way to game. He mostly spends his time playing formats that he needs to test. For instance, to get ready for the Masters Gateway he ran his deck through ten Standard Constructed 8-mans. However, his motivation doesn't come from testing, but gaming. It's just that since he's going to play, he might as well get whatever advantage out of it he can. 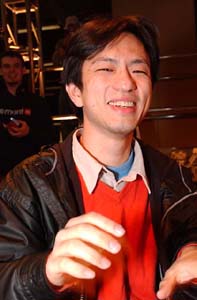 The ordinarily flamboyant Fujita was not keen to discuss the value of Online testing, having missed Day 2 the day before and been relegated to the money-draft tables. After a little prodding, though, he admitted that he feels the gains to be had from it are minor. He (like many Japanese pros) plays quite a bit, both Constructed and Limited, but doesn't see it as more helpful than paper Magic. Mostly, it's just fun.

There was no question in Tsang's mind that his work on Magic Online had helped prepare him for this Tour. The essential thing is being able to draft more often, developing a storehouse of draft knowledge. Being confronted with difficult or obscure picks helps to keep you thinking about different possibilities in draft. Magic Online simultaneously provides a forum for discussion about those picks and valuations, so the amount of information that can be shared is phenomenal. He can go back to a pick like Dragon Roost over Krosan Tusker and talk to a lot of other drafters to see their opinions on the subject. Also, one shouldn't underestimate the value of familiarity with game situations. Knowing the common strategies and how they play out gives you an edge in disrupting them.

As always, Budde's opinions on this subject were crystallized, and he spoke with the utmost brevity. It isn't that good a tool, particularly for Rochester, simply because it's hard to emulate the types of tables you'll face at a Pro Tour. You could face a random group, or a handpicked collection of pros, but neither will be the same that you see when it matters. 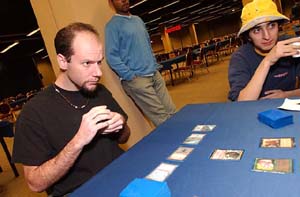 For The Hump, Magic Online is a necessity. Relocating to California has left him without a playgroup, and Magic Online ensures that he'll be able to game when he needs to. Certainly, he wouldn't have been in as good shape for this Tour without it. He also echoed Thoren when he talked about the value of having the game enforce the rules. When a new set is released, having the rules so overtly displayed ensures that you'll never mix up a complex group of triggered abilities or a strange card interation.

Lastly, there is David Bruneau of Boston. A longtime PTQ player, after six Top 8's he finally managed to take the invitation home, and attended this, his first Pro Tour. Since he didn't have a hard-core group to practice with, he turned to Magic Online. All that practice paid off: He finished Day 1 at 7-0. Now, he's quick to admit that he had some good fortune helping him get there, but he also knows that his game stepped up considerably from the work he put in on Magic Online. Interestingly, he stressed the fact that Magic is for the most part a social activity, and a lot of that is lost online. If you need to play for a narrow purpose and without good alternatives, then it does the job. He still enjoys mixing it up with his friends in real life.

The full effect of these statements is really that Magic Online is a companion to paper Magic, not some sort of super-tool that makes PT-caliber players. More than anything else it is convenient. It's a place you can always find a game, and your cards are a lot easier to work with. But that convenience isn't worth giving up all the things Magic Online can't give you. You can't have those really intense brainstorming sessions with your teammates where you design a killer deck from scratch. In-depth playtesting is also tough, particularly in constructed where the cards are harder to get a hold of. Also, because of the limitations of online gaming, it doesn't have the same social aspect. There are fewer war stories, and the good times don't really compare to a night of gaming with friends or that most venerable of traditions, the road-trip to the tournament. Magic Online is a complement to traditional magic, but it won't replace it any time soon.