fter sitting atop the standings for most of the weekend, Lars Dam has won himself the right to take a break. His Finals match against Cory Lack was short and sweet. He was handed his giant check and his flaming-tear-trophy-thingy. He walked out of the room to the applause of his fellow competitors. And now he has slumped into a chair, smile on his face.

"Great weekend," he began with a shake of his head.

After his victory here, the Danish player living on an island off of Thailand has secured himself a re-entry to the upper echelon of Magic competition, and he couldn't be happier.

"I enjoy playing in the really high level tournaments," he said. "I really enjoy playing on the Pro Tour, especially, but it's been a while. I felt much more nervous playing in this tournament than I remember being. I have the ability to chase points more than I had before, that's true. Otherwise, I wouldn't be making as big an effort as I'm going to."

Still, though he is certainly looking forward to the Pro Tour, he felt that this weekend might have been tougher than anything he'd had to deal with before.

"I feel like this was a higher-level tournament, if that's the right thing to say, because there are fewer players and the expected prizes are higher. It's more concentrated. I think this is a more important tournament to me than a Pro Tour, but nothing compares to the World Championship. That is clearly the pinnacle for the Magic world. It is the most premiere event I could play in." 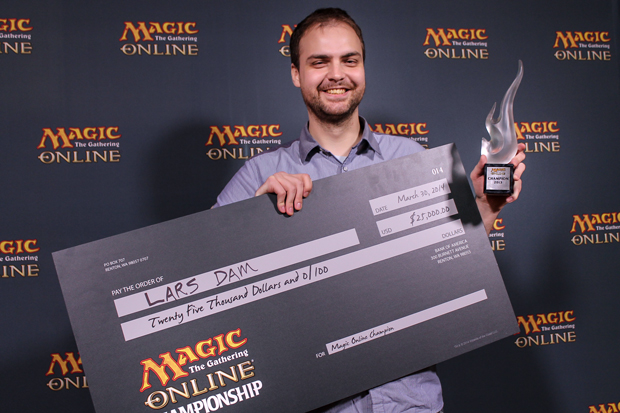 The fact that the Magic Online Champion gains entry to this most premiere of events is one of the cooler parts of becoming champion. Sure, the check and trophy are obviously fantastic, but there is the opportunity to get out there with the big dogs, the players that appear on camera week in and out, and to prove that you deserve to be among them.

"I haven't really thought much about it yet, but I think it's pretty cool that Magic Online gets to go into the real world and play in the large tournaments. I honestly think there should be more of it. A lot of the top players in the world have come from Magic Online. I think that if you are comparing a Grand Prix to a Daily event, the Daily is going to be harder on average. Players are just better and often more technically correct. Plus you get to see how every interaction works correctly, which really helps players improve if they might be in doubt about something."

This ability to see how every interaction works is one of the many subtle differences between live and online play. Sometimes these differences can prove a bit stymying during the transition.

"There are definitely some differences between live and Magic Online, so I think I'm going to have to train a bit before Pro Tour Journey to Nyx. It will come quickly, it's like riding a bicycle, but I will still need to work on some things. Things like remembering every trick, being comfortable shuffling my hand to hide the cards I've drawn, reading people to get reactions. We got to do that a little bit here in the Feature Match area, where we were seated across from our opponents. I know how to do all of these things, but I'm a bit rusty. I'll probably pull out my old Cube to get a bit of practice with my friends around home. The island I live on doesn't even have a single card store, I don't think, so I'll have to coerce some of my friends into playing with me."

For Dam, he's getting ready for more than just Pro Tour Journey to Nyx. He's even getting ready for more than just the World Championship. Thanks to the guaranteed points these events give him, he has the chance to jump back into the upper level of the game at full force, and he doesn't want to miss a beat. He loves Pro Tour play, and it's within reach.

"Playing in the World Championship will be great. For most of the players playing in it, they already have enough points to be close to Platinum. For me, I'm just playing to get more chances to play on the Pro Tour. It will be great."