Welcome to the second annual Magic Online Community Cup. Nine players from the Magic community have been selected to battle against a horde of Wizards of the Coast employees across multiple formats. The Community Team defeated Wizards last year, and there have been reports of a feverish Aaron Forsythe stalking the halls of Wizards in the wee hours of the night, muttering to himself as he builds the perfect decks to exact his revenge on the Community.

Wednesday's action featured Mirrodin Block Draft and saw the Community jump out to a big lead. The Community team extended its lead early Thursday after the Rise of the Eldrazi Sealed Deck rounds but Wizards struck back in Commander, narrowing the gap to a mere 10 points. It all comes down to Friday's Standard Unified Constructed rounds!

Here's how the scoring works: For the two Limited formats and Standard, there will be three rounds of Swiss pitting a member of one team against a player from the other team. Your first match win in a format is worth 4 points, your second win 6, and third win 7, meaning that a single player can contribute up to 17 points to his or her team's score in a format. For Commander, players will be placed in four-person pods (two players per team). The winning player earns 17 points, second place is 10, third place 4, and fourth place is worth zero points. Whichever team has a higher total points after all four formats will be declared the winner!

Thursday morning saw a bit of a format shuffle from Commander to four-pack Sealed Deck to traditional Sealed Deck...leave it to Wizards to start monkeying with the schedule and formats as soon as they fell behind! Take a listen to each side as they prepare for battle in Rise of the Eldrazi Sealed Deck. 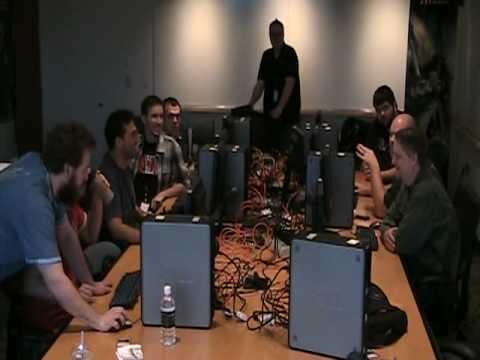 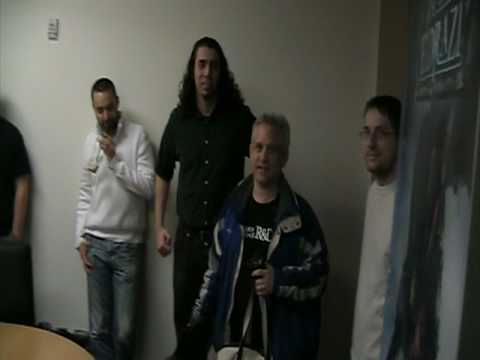 Bright and early Thursday morning, the Community team stumbled in heavily caffeinated and ready for action. While the previous days had featured a few cool excursions and tours before play began, this was going to be a full day of play, open to close, and they came raring and ready to go. The first event to be played was Rise of the Eldrazi Sealed Deck, the second and last Limited event of the Cup. Wednesday, the Community team had managed to put a great record together in the Mirrodin/Darksteel/Fifth Dawn draft format, including a 3-0 performance from starkingtonpost.com everything-man Bill Stark. Stark was actually quoted yesterday as saying that the Community team really needed to cement a good lead before the Constructed rounds began, and he had done his best to ensure that they did.

As the players built their decks, I wandered from room to room looking for any juicy card pools that may have been opened. The Wizards staff had opened some decent cards, including Mike Gills's Kozilek, Butcher of Truth and his right-hand Artisan. Creative mastermind Doug Beyer opened a pretty sick little number featuring triple Nest Invader to provide the beats and help him ramp into a substantial amount of fat. But it was the Community team that had the more impressive decks, in my estimation. Gavin Verhey opened a removal-laden gold mine featuring triple Staggershock. Bill Stark had a bunch of quality spells in his deck to get back with his double Mnemonic Wall, including a Staggershock, Vendetta, and Heat Ray. While these decks were pretty absurd, the king of the Community decks had to be Ed Grabianowski and his partner Gideon Jura. Helping the two of them out was an all-star cast of blue and white levelers, as well as two copies of Time of Heroes and Champion Drake. 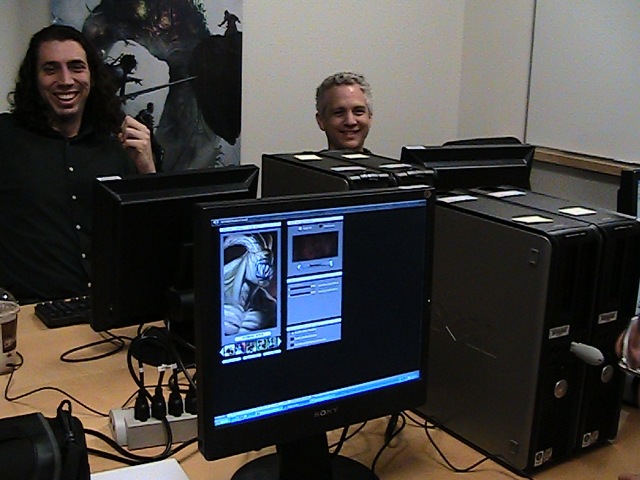 So many Grinning Demons.

During round one, the Community flexed their superior card pools. Gavin managed to quickly dispatch Mike with a hyperaggressive draw backed up by Staggershock. Following suit, Brad Nelson cut Mark Rosewater down to size with a Hellcarver Demon, though he had a couple of funny missteps along the way. At one point, Rosewater aimed a Staggershock at Nelson's Eldrazi Spawn token. Nelson, who wanted to sacrifice it to counter the Staggershock, preventing Rosewater from getting a second use, found himself unable to do so because he had pressed F6 earlier in the turn to pass through to his next turn. Oops!

"Oh man, he totally got me there!" lamented Brad. 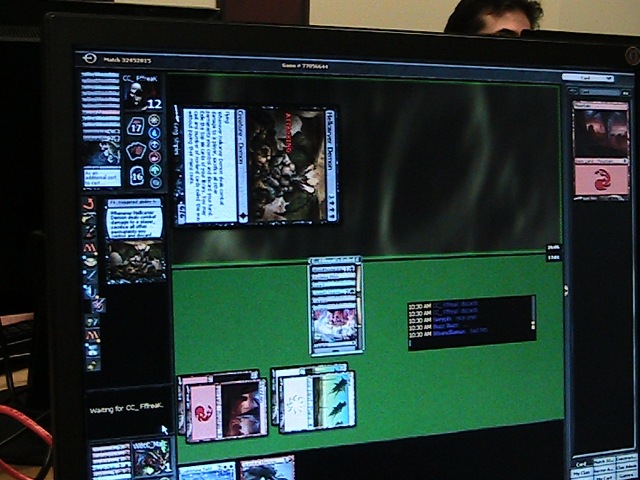 Bill Stark had an interesting match against Jason Smith. Stark managed to draw fourteen cards over two turns thanks to a rebounding Recurring Insight. He actually started to worry about the very real potential of decking himself. Luckily, he had found enough gas that he was able to put things together for himself.

"How would you feel if I told you I had two Mnemonic Walls and a Staggershock in hand," Stark asked.
Within seconds, a small window opened up informing him that he'd won the match.

Perhaps the funniest match of the first round was Mike Turian against Ed Grabianowski. As discussed earlier, Grabianowski's deck was pretty absurd, and he found himself relying on that strength to deal with Turian's powerful draws. Ultimately, for the last game, he found himself keeping Turian's entire team at bay with a Dawnglare Invoker. Turian's army consisted of fourteen Soldier tokens from a rebounded Nomad's Assembly and a few other monsters. Turian was waiting to draw one of his two copies of Regress to just end it, but he never got the chance. 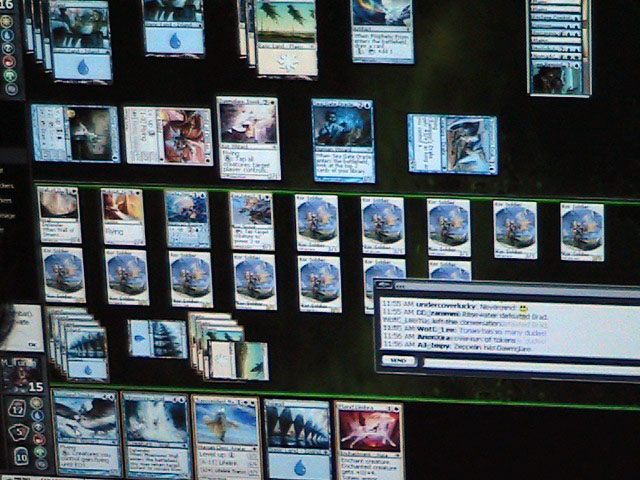 In addition to slinging creatures around, both players had some great quotes.

To Evan Erwin, who had just advised Grabianowski to start leveling his Halimar Wavewatch: "We have a gentlemen's agreement not to islandwalk each other."

"This Jwari Scuttler is going to scuttle you right out of the tournament."

The last matches of the round were a little less power-packed. In one of the side rooms, Marin Baraba battled Jason Radabaugh. I caught most of the first game of the match, and things were not pretty for Baraba. Radabaugh had a Mammoth Umbra on his Knight of Cliffhaven, prompting Alexis Jansen to remark, "Nice Serra Angel." Marin's response?

After dropping that match, Marin somehow managed to claw his way back to a 2-1 victory, giving the community team a 6-2 advantage after the first round. 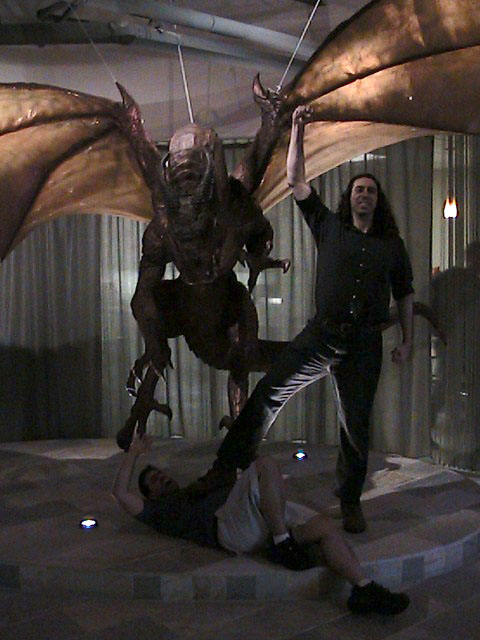 The second round started a little better off for the Wizards team. As Gavin Verhey found out that his next round opponent was Doug Beyer, he shouted, "It's time to savor the flavor...of victory!" I was the sole person laughing in a sea of groans. Instead of victory, all Verhey got was a sour taste in his mouth. After setting up a brilliant Consume the Meek, which prompted Beyer to exclaim, "Oh no! The meek! They have been consumed," Beyer merely untapped and played Traitorous Instinct to steal the lone remaining creature on the board—Verhey's Valakut Fireboar—and attacked him for the win.

This entire event was filled with priceless moments. After Gavin had built his deck, he and I began debating who would win a fight between Jugan, the Rising Star and Hikari, Twilight Guardian. In a flash, Doug made his way over to us to join in on the discussion. After dropping his match, Lee Sharpe was spotted watching Mike Turian's match on his computer...which was right next to Turian's. In one of the satellite rooms, Bill Stark won one of his games by playing a pair of Snake Umbras on an Aura Gnarlid. When he got the prompt to draw his card off of the second Umbra, he yelled at the screen, "Yes, of course! Stop asking me if I want to draw a card! I always want to draw cards!"

After all was said and done, the community extended their lead quite a bit, finishing the round with a 125-69 lead. Up next was Unified Commander, which the Community admitted heavily favored the Wizards team. 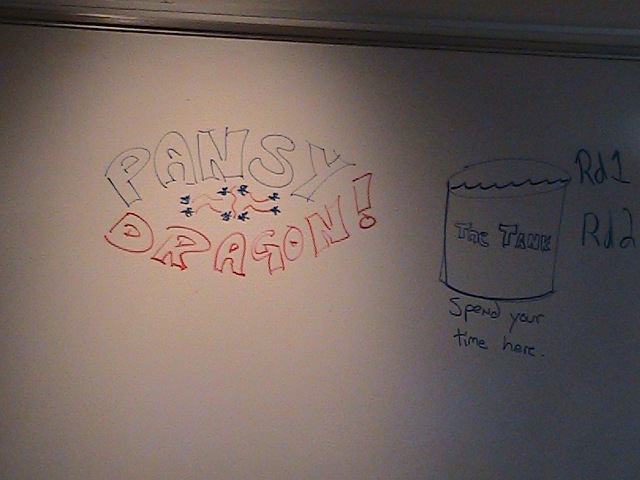 This is what happens when you put a whiteboard near Magic players.

With two formats in the books, the Community team is sitting pretty. But what does Commander have in store? Each team introduces their generals in this unique format which features four-person pods pitting two members of each team against one another in a "free-for-all". 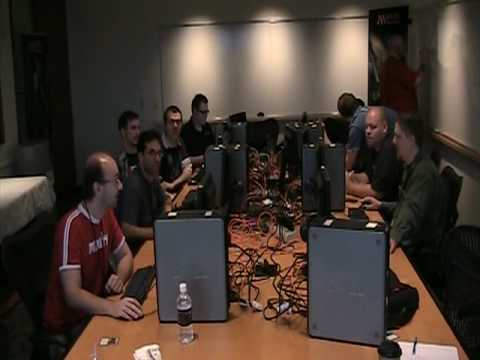 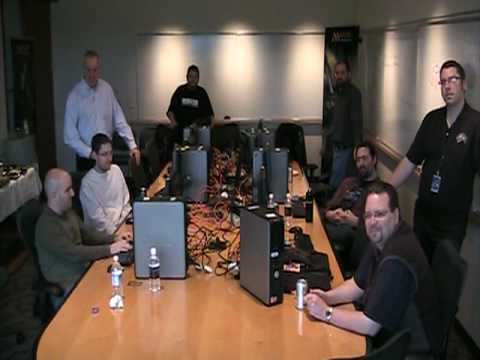 In between Commander rounds, I caught up with the Community members to hear their stories about how the week's been going, their top memories so far, and the role Magic has played in their lives. 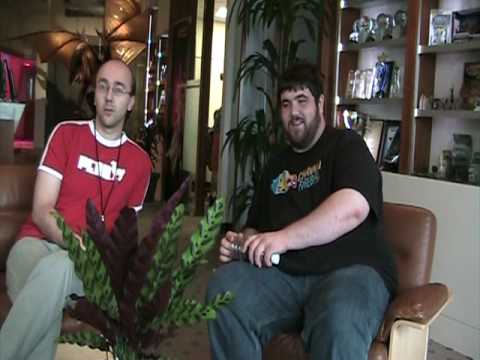 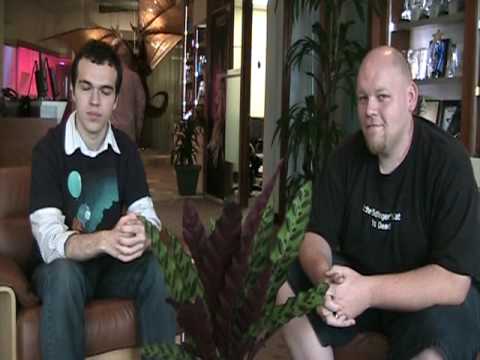 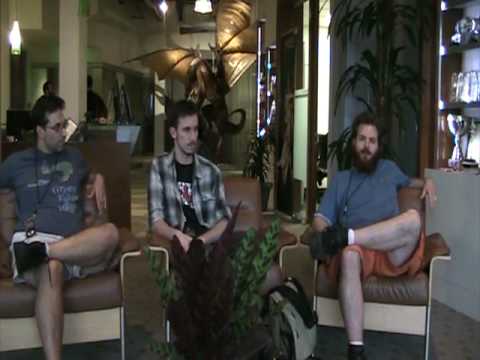 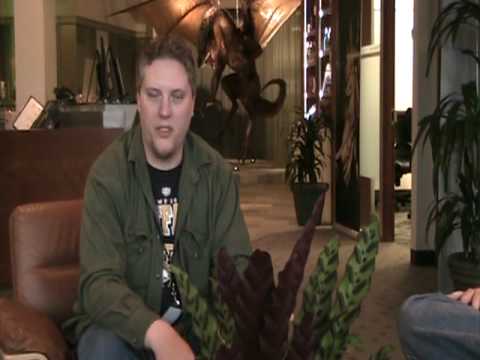 Things have gotten quite tight here at the Community Cup Challenge. With all of the sightseeing taken care of over the last couple of days, it was time to get down to business. Play covered two formats today: Rise of the Eldrazi Sealed Deck and Unified Constructed Commander. After five marathon rounds of play, the Community team leads the competition by a slim 10 points. As is customary for the final round of the challenge, we needed to determine the "multiball" multiplier to be applied to the final rounds of play Friday. To do that, there was a third round of Commander—if a team took three of four, they'd get +50% on Friday's rounds. If there was a sweep, it would be a whopping +100% bonus points.

Early on, things looked grim for the Community team. Down two matches, it appeared they were going to be facing down a significant multiplier for the Wizards team. With their backs against the wall, Ed Grabianowski and Callum Milne went off with Trade Secrets to set up a massive Seismic Assault, taking the first of the remaining games and staving off a total sweep.

In the final match, it looked like the Community team was going to lock it up. After using Jhoira of the Ghitu to suspend a few creatures, Marin Baraba used Jokulhaups to clear the board of everything except Charles Rapkin's Lurking Predators across the table. When a fortuitous land and Essence Warden from Scott Larabee allowed the Wizards team to find a lurking Charnelhoard Wurm, things suddenly swung wildly into Wizards's favor. However, with some perseverance (and a good amount of thievery), Marin and Gavin managed to take almost all of their opponents' permanents, as well as the match. That evened things up and making sure that there would be no multiplier in tomorrow's Standard rounds.