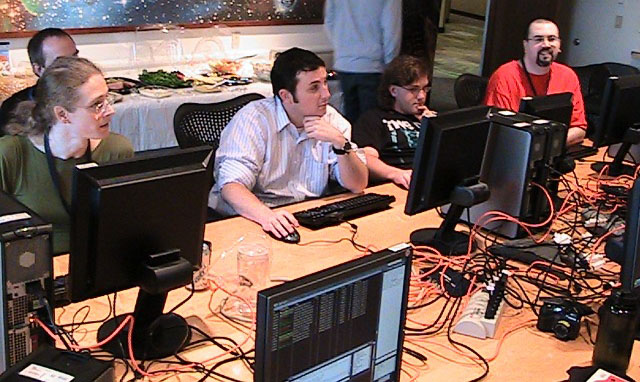 Welcome to the second annual Magic Online Community Cup. Nine players from the Magic community have been selected to battle against a horde of Wizards of the Coast employees across multiple formats for the next three days. The Community Team defeated Wizards last year, and there have been reports of a feverish Aaron Forsythe stalking the halls of Wizards in the wee hours of the night, muttering to himself as he builds the perfect decks to exact his revenge on the Community.

Wednesday's action featured Mirrodin Block Draft and saw the Community jump out to a big lead thanks to a 3-0 draft by thestarkingtonpost.com's Bill Stark.

Here's how the scoring works: For the two Limited formats and Standard, there will be three rounds of Swiss pitting a member of one team against a player from the other team. Your first match win in a format is worth 4 points, your second win 6, and third win 7, meaning that a single player can contribute up to 17 points to his or her team's score in a format. For Commander, players will be placed in four-person pods (two players per team). The winning player earns 17 points, second place is 10, third place 4, and fourth place is worth zero points. Whichever team has a higher total points after all four formats will be declared the winner!

I took a moment before the MD5 draft began to talk to the Community team, hoping to glean some insight into their preparation and plan for defeating the Wizards team.

I believe introductions are in order, of the Wizards team, that is. The eight-member home team for the MD5 draft takes a minute to tell you who they are, what they do, and how they're going to crush the poor visitors into an unrecognizable paste.

Mike Gills prowled behind the scenes during the Mirrodin Booster Draft at the 2010 Magic Online Community Cup. 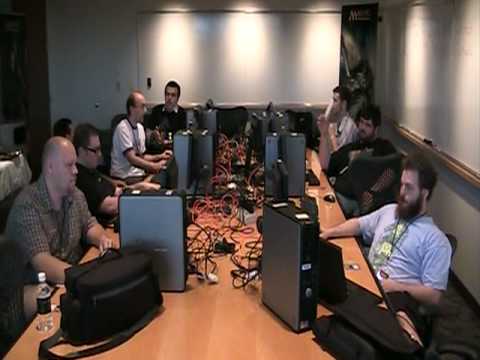 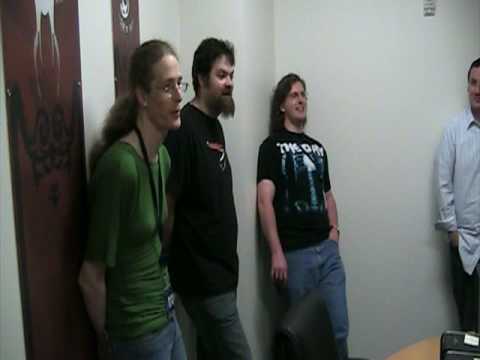 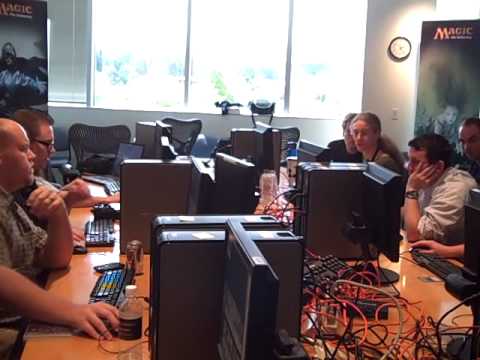 With the drafting completed, the players split up into the three rooms they'd be occupying to play, but they didn't necessarily stay there. The next few hours became a whirlwind of activity as players finished matches and ran between rooms to cheer their teammates on. The first casualty of the draft was Evan Erwin. His blue-green deck ran into Worth Wollpert's hyper aggressive black-red deck which, with a little help from the infamous mana screw, took Evan out with only a little effort. 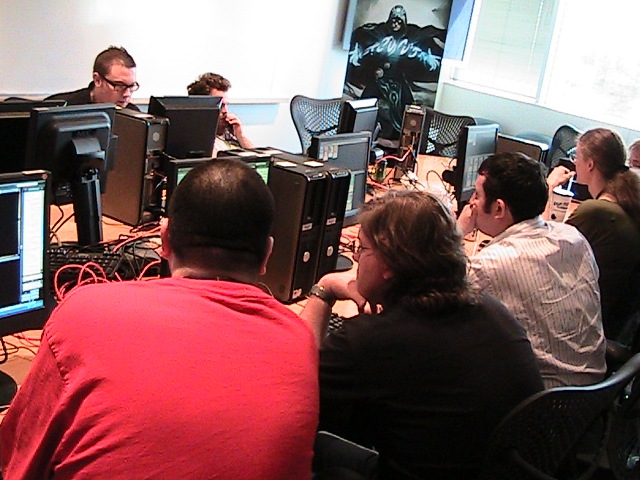 A hand over the mouth is the universal symbol for 'Wait, what do these cards do again?'

As the round dragged on, the Wizards team was down 3-4 with one match to go. And did it ever go, and go, and go... Alexis Janson and Marin Baraba were the last match to finish of the round, and almost ended up being the last match to finish of the next round, too. Each game ended with the players down to a single-digit number of cards in their libraries. At the end of everything, Janson's Furnace Dragon proved too strong for Baraba to handle, and she flew off with the victory, evening thing up. 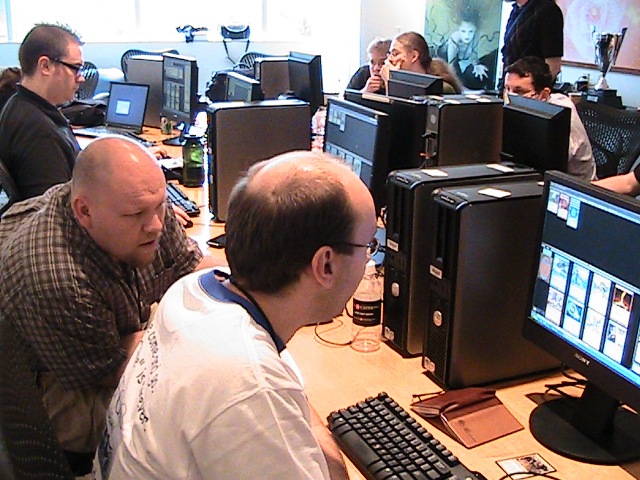 The next round went a little better for the Community, pulling ahead with a 5-3 victory. Big hits this round included Joseph Hill getting crushed by a Spikeshot Goblin with a Grafted Wargear and a Vulshok Gauntlets-equipped Neurok Spy. In his second game, facing down a certain death to these powerhouse creatures, he managed to get enough damage in with his fliers so that he was able to rip an Essence Drain for the win on the last possible turn. Unfortunately for him and the Community, Corey Fellows's deck was a bit too strong, taking the match for Wizards.

The final round went similar to the previous one, ending with a 5-3 advantage for the Community dawg pound. In a surprising turn of events, Gavin Verhey, who most of the Community felt had one of their strongest decks, lost for the second time, dropping to a personal record of 1-2. This round actually started pretty early since final-round opponents Bill Stark and Worth Wollpert finished their second round very quickly. Their final match didn't slow the pace at all, the pace of the match best shown by the 12/11 Juggernaut that Bill had built smashing into Worth over and over again as he struggled to find any red mana. 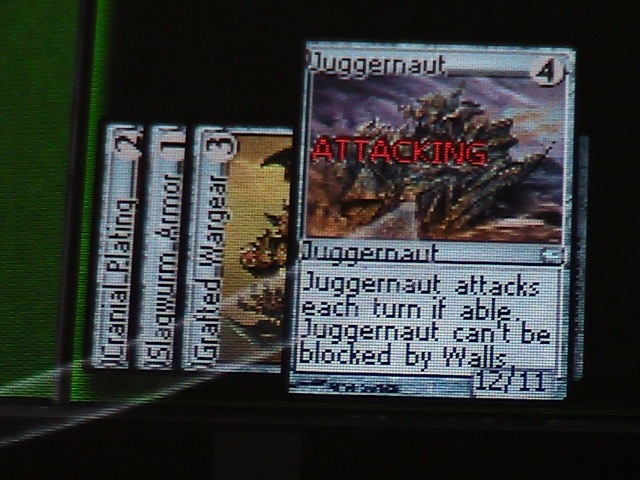 During the course of the event, other Wizards staffers wandered into the room to watch the matches and root on the home team. Alexis Janson's incredibly long matches drew the most viewers. It was like watching a feature match at a Pro Tour, with a dozen spectators crammed behind the players. 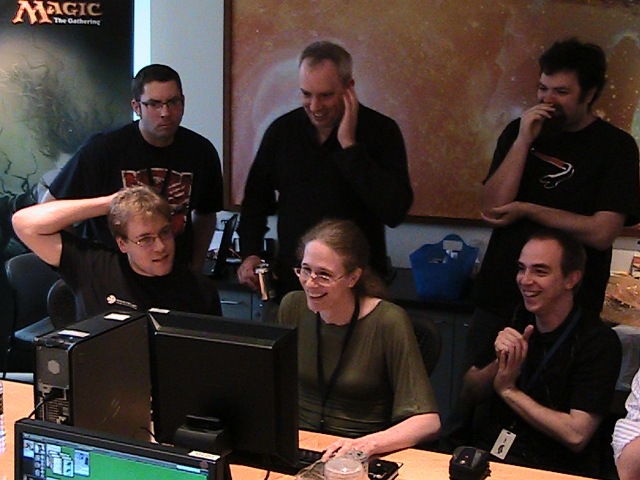 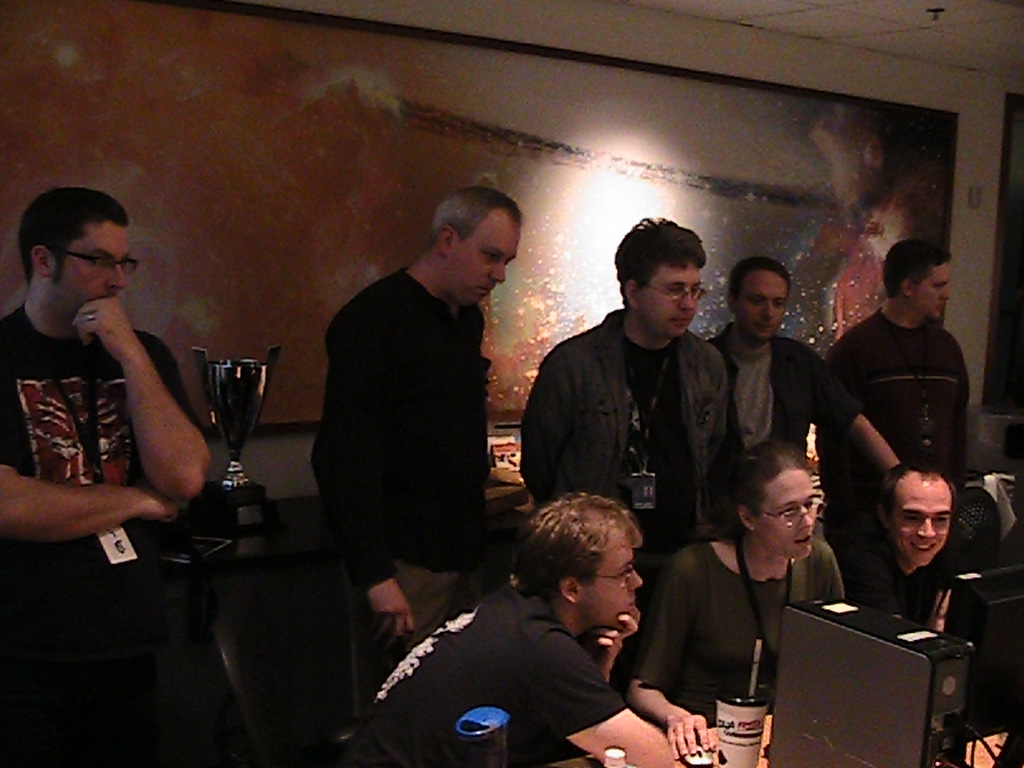 What is Ed Grabianowski doing on the WotC side? Traitor!

Perhaps my favorite part of getting to wander these rooms was getting to hear all of the great quotes from the players as they drafted and played. The leader of the pack definitely came from Matt Tabak: 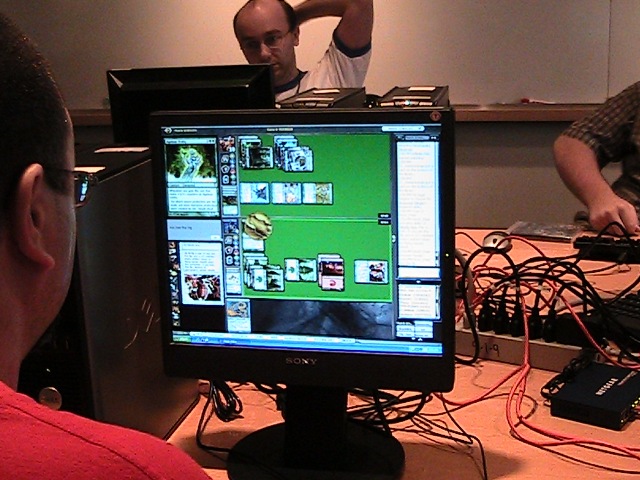 After all was said and done, the Community team won the first day of play 75-47. According to Bill Stark, "We really need to get our lead with the Limited formats." This was a great start. 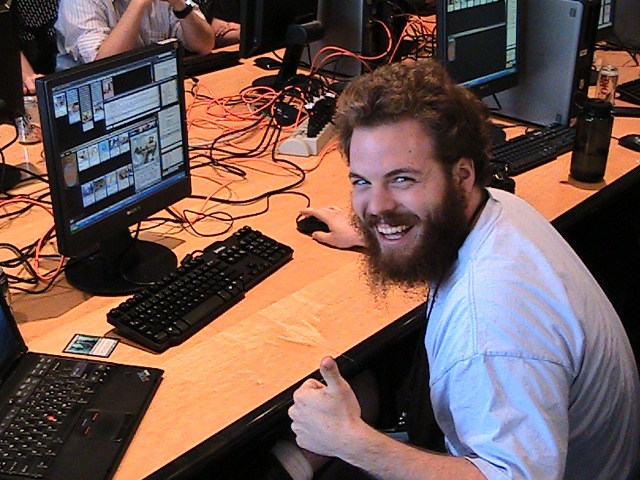 Vedalken Shackles is some good.