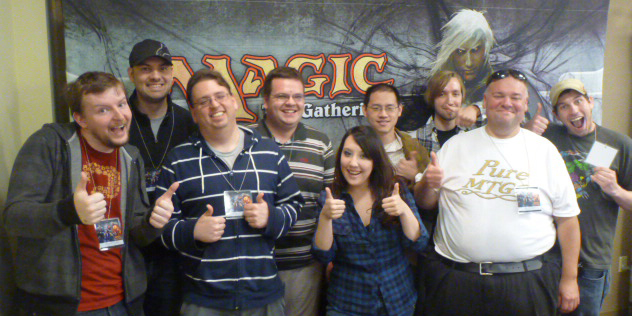 The Magic Online Community Cup has rested in the hands of the Community for the first two years of its existence. Who will hoist the the Erik "Hamtastic" Friborg Memorial Trophy this year?

With three rounds of Scars of Mirrodin draft completed on Wednesday, the Community Team took a 20-point lead but saw that advantage disappear in after-hours play. The Wizards Team completed a 6-0 sweep in Archenemy on Duels of the Planeswalkers 2012 as the Community Team crumpled before the awesome might and fiendish schemes of Zac Hill, Dave Guskin, and Mike Mikaelian

If the Community Team manages to defeat the Wizards Team, all players who log on to Magic Online anytime on Wednesday, June 15; Thursday, June 16; or Friday, June 17, will be invited to a no-entry-requirement Planeswalker-format Constructed tournament on July 3! All players who play in this four-round, Swiss-pairings event will receive one Magic 2011 booster pack. All players who earn 12 match points by going undefeated will also receive any three Magic Online booster packs of their choice—yes, any three!

If the Wizards Team wins, however, players will not go empty handed; all players who logged in between June 13 and June 17 will receive a Darksteel Relic promotional card with a June 17, 2011 date stamp!