On a green marble floor, two black tables sit pushed close together. On opposite sides of the tables, Anssi Myllymäki and Shouta Yasooka sat staring forward intently. But their eyes never met. Between them were two 30-inch monitors creating an electronic shield, isolating them from each other despite the fact that either could reach out and touch the other. A strange moment occurs where neither player says a word to the other, but words are exchanged. On the screens, Magic Online is booted up, both players logged into their respective accounts. They have a quick conversation via the chat boxes in the interface before leaning to the side of the monitors and smiling at each other as they speak to each other verbally for the first time since I sat down to watch the match. 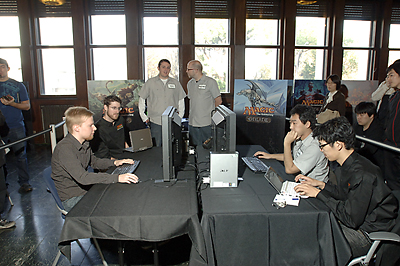 "Good luck," they each wish with a smile.

Both players have had a great time playing this weekend, despite the long days they were forced to play since the Magic Online rounds came after the six rounds of Worlds play had ended. While the deciding format of the event would be Standard, much like Worlds itself, both players agreed that their favorite matches of the weekend were in Classic, in particular the one they played against each other. Anssi was playing Grindstone deck against Shouta’s Dredge deck, which is a terribly interesting matchup.

Obviously, to have even gotten to this point, both players had to play a ton of Magic Online. Anssi has admitted that, as a student, he was able to play online four or five days a week, almost all day. In the closing weeks of the collection period for the qualifying points, however, his schoolwork caught up with him and he was forced to put Magic on the back burner to focus on his exams. Fortunately for him he’d amassed such a large number of points that he was able to make it here even without playing a game on Magic Online for the last week of the period.

He’s only been playing competitive Magic for about four years, and the overwhelming majority of his play has been on the Magic Online platform. Many of the newer stars on the Pro Tour learned to play and honed their skills in much the same way. Magic Online forces you to know and learn all the rules and card interactions. Simply playing on it forces you to be and become a better player. 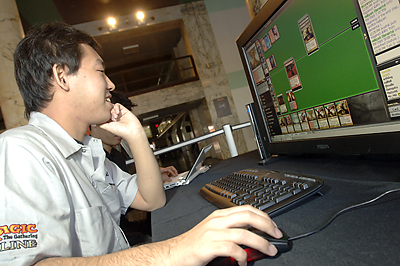 Yasooka is of a different bend. While he obviously played an immense amount online to qualify for this tournament, most of it was purely for the purposes of qualifying. Most of his testing is done on paper with the other Japanese Pro players. It’s hard to argue with his results, too. After all, he finished one win away from making the Top 8 of the Worlds main event. That’s an immensely difficult thing to do. It just proves that the best way to think of Magic Online is as a tool, either to be used or not used, but always available, regardless of time of day.

While waiting for the cue to begin their final match of the weekend, both players were busy chatting away with their friends online and spreading the word about where their match could be found so everyone at home could watch. When the signal was finally given, the first virtual die was cast. Anssi won the roll and chose to go first. Yasooka had to mulligan his first draw, negating the one advantage of going second.

When Anssi made a Hellspark Elemental and sent it over for three, there was a little murmur amongst the spectators. Saturday in the Standard portion of the tournament, Anssi played effectively the same Jund deck as Yasooka. And four other players. He admitted to me that the Standard rounds he played Saturday were the least fun of the tournament, and he wished he had played a different deck. With the opportunity to do just that, he jumped at the chance and brought a monored deck to his final match. 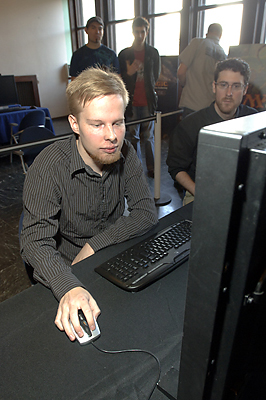 A quick turn five victory for Anssi took less than seven minutes to play out. It was lightning quick.

The second game started just as aggressively as the first had. A Goblin Guide combined with a Hellspark Elemental managed to knock Yasooka down to single digits before he was able to stabilize with a Sprouting Thrinax. A Quenchable Fire from Anssi dropped him to one over the course of two turns and a simple Burst Lightning finished things off. Just like that, in twelve minutes, the championship was over. Anssi Myllymäki made the decision to switch his Standard to have a little more fun, and it certainly worked. With the $13,000 he won defeating Yasooka, he’ll be able to have fun for a while to come.