Welcome to Chicago and Magic Weekend 2008! The crack reporting squad of Nate Price, Bill Stark, Brian David-Marshall, Richard Hagon, and Craig Gibson are combing the halls of McCormick Place for all the inside information.

As the grinders went on late into the night Thursday, Richard Garfield held court talking about his long history with Magic. Listen in as he shares his gaming philosophies, recalls old memories of the game, and talks about his new gaming venture "Schizoid."

It's Magic Weekend, and the tournament is in your neck of the woods (the Midwest). On top of that, it's your birthday and you're excited to see the U.S. National Championships. Unfortunately for you, you didn't manage to qualify at your City Championships or Regionals tournament. What to do?

For many players on Thursday afternoon, the answer was joining one of a number of last-chance Grinders. But for one particular player, things got a little sweeter. Larry Waymon, a long-time player from the St. Louis area, was in exactly the situation described, celebrating his birthday amongst friends but not yet qualified for Nationals. He managed to battle his way to the finals of a Sealed Deck Grinder, enduring a number of rounds of tough competition but, as many a Grinder player can tell you, the last round is the killer. Second place is the same as last in that all-or-nothing environment.

Enter Tim Galbiati, a fellow St. Louisian who actually rode with Larry to the event. For a long time Tim was a semi-pro, playing nearly every Pro Tour each season, but had taken a break from the game recently to focus on studies. A National Championship in his backyard was too good to pass up, however, and he also found himself in a Sealed grinder playing for the Finals. The same grinder, in fact, as his good friend Larry. His good, birthday-celebrating friend.

When the two found themselves sitting across from each other in the finals of their grinder, Tim knew there was only one thing he could do. "Happy birthday Larry," he said, smiling and extending his hand, conceding his friend into a Nationals berth. 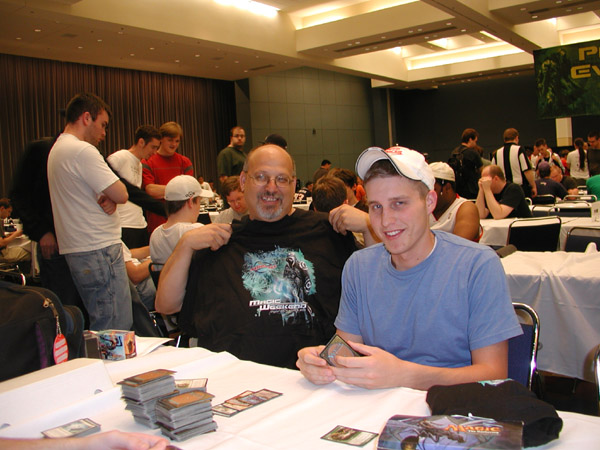 How does Eventide impact the draft format, and what are you hoping to draft? 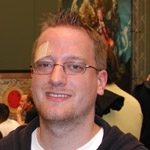 Chris LachmannChris Lachmann: "Eventide makes you draft tighter; you can't be too dedicated to a color combination in the first two packs. I'm hoping to draft mono-white." Brandon ScheelBrandon Scheel: "Mono-color decks are stronger now. White and red are the strongest colors; I think white decks have the best shot at going 4-0." 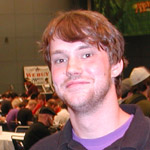 Jacob Van LunenJacob Van Lunen: "Red is a lot better, and white is ridiculous. You have to stay open-minded in the first packs; I don't know my color combination until pack 3." 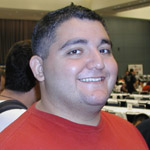 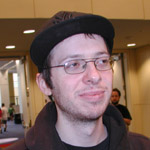 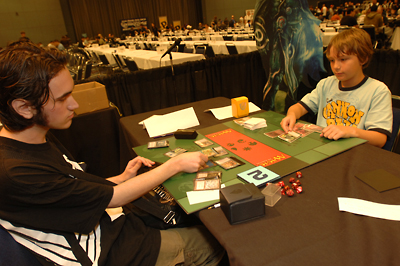 Theo Larson, right, was the youngest player in the field.The first event to kick off this weekend was the Juniors Laptop Computer Standard Constructed event. That's quite a mouthful! Twenty-nine players ranging from eleven years old to a month shy of seventeen have shown up to duke it out for the chance to win a laptop computer worth approximately $1000. It's a great chance for younger players of the game to show off their skills in an arena designed specifically for them.

Theo Larson was the first person I had a chance to catch up with in the event. Coming in at eleven years old, Theo is the youngest player in the tournament. He hails from Elmwood Park, IL, which is a suburb of Chicago, and he made the trip from his house here to play Standard all weekend. He decided on a mono-red deck featuring Demigod of Revenge to attempt to win himself a brand new computer. He's been playing for about four years, but has only been playing tournaments for about a year or so, mostly playing in Friday Night Magic.

His local store, Pastimes is a beacon for Midwest Magic, and is the home of virtually every PTQ in Chicago. As a Midwest Magic player, I have many fond memories of driving up from Indianapolis, getting crushed by the Madison players who made the trip (damn you Wisconsin!), and consoling myself with a little Giordano's on the way home. Due to its central location and high profile, it's a great place to learn to play and hone your skills. Theo has done just that, and may see the first PTQ of his young career tomorrow morning. 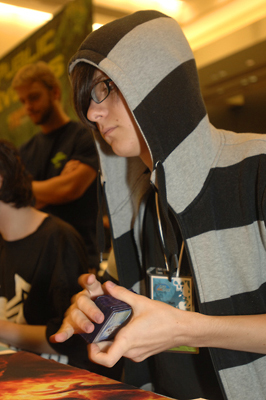 Matt Nickolai sat on the other end of the age spectrum.On the other end of the spectrum, Matt Nickolai comes into this tournament a little over a month away from his seventeenth birthday, making him the oldest player in the field. He has been playing the game since about 2001, and he also started out playing Friday Night Magic at his local card store in Waterford, Michigan. He is a former MSS player who has worked his way up and has now made the jump to the PTQ circuit.

Friday Night Magic seems to have facilitated the start of many a players' interest in competitive Magic, which is absolutely wonderful to hear. It's a great way to get practice in against players in your general skill range. Matt has put himself in good company to take his game to the next level. The RIW Hobbies players, such as 2007 National Team member Michael Jacobs, are great company to put yourself in if you want to break through. Matt's rise mirrors my philosophy on how to get better at Magic: Find a place to play and play until you are the best player. Then find better players and play until you can beat them. If you do that long enough, you make it to the top. Matt seems well on his way to breaking onto the Pro scene. 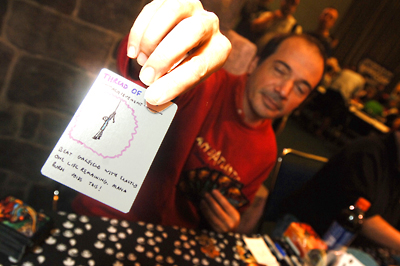 Richard Garfield shows off one of his custom-made achievement cards.Sitting back in the coverage Batcave, word started to filter in about midday that Richard Garfield was up to something. He had taken up his usual post in the gunslinging area, and had brought some unusual props with him. From the back, they looked like Magic cards. From the front, they looked like refrigerator art. These were Garfield's achievement cards, an idea that had come to him Thursday.

Arrayed out in front of him are twenty or so achievement cards, each hand-drawn by Garfield himself, and each sporting an achievement. If a player manages to achieve something listed on a card, he gives them that one-of-a-kind achievement card as a memento. These achievements range from the Personal Trainer achievement, which rewards a player for having more than 40 life, to the Elf Lover achievement, which a player gets for killing Garfield with an Elf. There are many other ways to win one, and Garfield hopes that it encourages players to think a little deeper before settling on deck choices and plays. 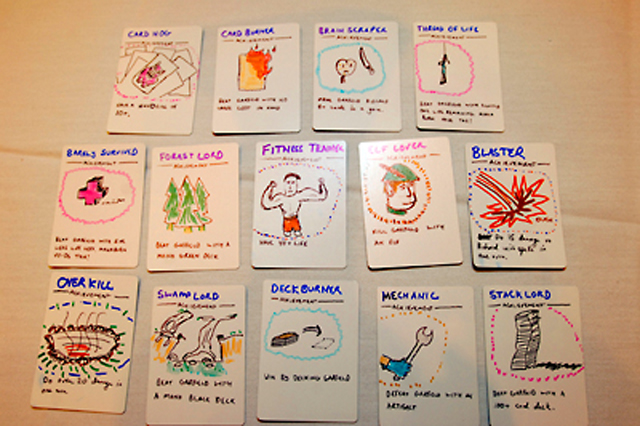 Fitness Trainer? Elf Lover? Overkill? Accomplish one of these against Richard and a special reward could be coming your way.

Click here to see a larger version of this image.

So it's Round 3 of the Vintage prelims with players competing for two byes in Saturday's championship. The first feature match squares up two 2-0s in Chris Boomer and Stephen Menendian. Stephen's playing the old/now-new Pitch Long and Boomer's deck is shrouded in mystery (more on that later).

They both kept their opening seven after Menendian won the roll, and Boomer started with a turn-zero Leyline. "Uh oh. Ichorid?" Stephen asked. Boomer responded with a convincing "Nope," a self-satisfied smile on his face. Stephen was then utterly miffed as to what would run maindeck Leyline other than Ichorid. His almost-patented, in-match talking had him wonder aloud. And believe or not, Pitch Long does like graveyard access for its inevitable Yawgmoth's Will.

It's ok for Stephen though. A turn-one Mox-Ritual-Tinker-Colossus doesn't need no stinkin' graveyards.

And without casting a spell, Boomer passes twice and scoops.

Boomer, who was in fact playing Ichorid, bluffed the reigning Vintage World Champion so badly, he didn't side in his four Yixlid Jailers (though to be safe, he brought in two Tormod's Crypts—just in case).

After a mulligan from Boomer, he played Chalice for 0, an Unmask and tapped Bazaar of Baghdad, discarding two Narcomoebas; I think the jig is up. When Stephen revealed a Black Lotus, Mox and a Mana Crypt, there was nothing for Boomer to do but thank his lucky stars for the Chalice. Steven's return Duress revealed simply a Dryad Arbor. They played draw-Bazaar-go for a bit and Stephen grunted with each laying of a land; he was digging. He looked through Boomer's graveyard, "So you're going to kill me next turn?" "Maybe." Chris has got his mind game done pat.

Minutes of thinking and a Memory Jar later, Steven passed, his arms crossed tightly at his chest. On Boomer's upkeep, with each card Chris Dredged, Stephen tensed more and more. Boomer was smiling, pretty sure he'd got the game won, but he hadn't done it yet. A small attack hit for 6 and a double-Cabal Therapy stripped Steven's only card—a Yawgmoth's Bargain, uncastable thanks to the Chalice for 0.

On Steve's upkeep he broke the Jar and smiled the most sinister smile I've ever seen. That man's got a grin, let me tell you. Boomer didn't know it yet, but it looked like he just lost. God I love vintage.

After doing some showy out-loud calculating he said, "Yeah, you're dead."

But Boomer wouldn't be bluffed as easily as Stephen was.

4 Skred 4 Magus of the Moon 2 Pyroclasm

4 Incinerate 4 Lash Out 4 Stigma Lasher 2 Inside Out

4 Figure of Destiny 4 Demigod of Revenge

4 Magus of the Moon 4 Faerie Macabre