A Man of the Internet 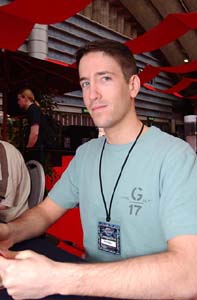 Sol Malka got his breakthrough as a Magic player when he won 2002 Grand Prix Tampa. But long before that, he Atlanta resident made a name for himself on the internet by writing tournament reports. Maybe that is why he became the target of internet insults and was challenged to a controversial, three-format one-on-one competition where the loser would have to pay up 100 dollars, kiss the winner's posterior or tattoo the winner's initials on his body.

"I am not going to respond to that challenge," Malka says. The 27-year-old actuarial analyst has just finished two rounds of the 2002 Pro Tour Nice, and he is up 2-0 in matches. Far away from his home and his personal computer, he tries to explain how the "Ed Fear Challenge" came to exist in the first place. The whole thing was initiated by Peter Szigeti, another internet regular, who insulting Sol on a message board. "It was basically "your mother" type of comments. He insulted me, and I did throw a few one-liners back, which I regret. I regret responding at all," Malka admits.

The messages were read by a lot of people, including Ed Fear. He apparently found them funny, so he challenged the two players, offering to put his own money into the three-format tournament. "The thing about Peter is, to my knowledge he has never made a day two in a Pro Tour. Most of the stuff he has won, has been in the team format, he hasn't done squat as an individual. I guess most of his insults were jokes, because he has made a name for himself by insulting people. So I am not going to respond to the challenge. If people want to call me a coward, fine, but I have nothing to gain from this," Malka thinks.

As a member of the "older" generation of Magic players, Malka thinks there is a line drawn between players at his own age, and the young players between 18 and 21."It is hard to think of myself as old, I'm 27, so it's ridiculous. But some players have no regard for basic respect and decency, and for consequences of actions," he says, adding though that far from all players act like that. "There are a few, giving the others a bad name, because those who act badly, fall into that age group."

Sol started playing Magic in 1994 when he and his two year younger brother bought a starter and a booster each. The game didn't seem all that appealing though after getting smashed again and again by a Sea Serpent. In college, however, Sol's roommates played Magic, and after half a year of playing with their cards, he started buying cards of his own. "I enjoy the competition. In high school, I was in academic contests, and this takes it to another level. But I don't consider myself a gamer. This is the only game I play."

Through Magic, Malka has made a lot of friends and acquaintances. "My best friends are Magic players. I like the social aspect and the competitive aspect of the game," he smiles. Maybe that is why he becomes ticked off by bad behaviour and of course, by cheating. "There are no real consequences for cheaters. They can walk away, basically having stolen tens of thousands," Sol says, adding that in most other situations, people would get fired or go to jail for doing the same.

Personally, Sol tries to be a one of the good guys. "I think most people perceive me that way. If not, then I think it is because in my reports, I call out the cheaters and those who conduct themselves badly. And I am going to keep doing that. If somebody cheats or represents themselves poorly, if I see it, I am going to write about it."

The efforts to be a good guy might be the reason why Malka finds it sad to hear that some people perceive him as arrogant. He thinks some of that stems from the fact that he has been labelled as a self-proclaimed, or self-appointed people's champion. "In Saga and Masques type 2, I made the original "The Rock and his Millions"-deck, a Phyrexian Plaguelord, Deranged Hermit deck. "The Hermit puts four and four tokens into play, and The Rock is always talking about the millions and millions of Rock fans. That's one of his catch phrases. I am sort of a wrestler fan, and The Rock calls himself the people's champion. That's where it came from, from local people. Many people still ask me to sign Plaguelords."

So far, after seven or eight major events, his best Pro Tour result is a 18th place finish from Pro Tour New Orleans. Sol admits that he wouldn't mind winning a Pro Tour or the World Championship. "But whether that will happen or not, I see myself playing indefinitely as long as there is a Pro Tour," the 27-year-old notes.