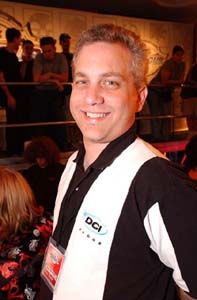 It's that time of the year again. The votes are in, the invitations have all been handed out, and the formats have been introduced. The sixteen best Magic players in the world will come to Cape Town, South Africa next month to compete in various formats for the right to be immortalized with their own card. The Invitational is upon us, and Mark Rosewater is the man behind it.

Make no mistake about it, this tournament is Rosewater's favorite. This isn't much of a surprise, since the Invitational was his idea, and he is the man behind the concepts and formats involved with the event every year. Does this make a difference? Consider the fact that this is the man who brought you Yawgmoth's Bargain, Mind Over Matter, Earthcraft and Replenish, and you get an idea of how his mind works. Pro Tour players might be able to playtest and prepare for major events, but Mark likes to give the Invitational an entirely different flavor. The competitors can't really prepare themselves for many of the formats, especially Duplicate Limited, which always has a different theme to throw off the players.

For example, the past has seen Duplicate Limited contain card pools made up of all poor cards, all overpowered cards, and cards with altered casting costs. Mark explains, "The signature format has always been Duplicate Limited, since we've had it at every Invitational. We throw curveballs at players, and see what they do. It's fun to see players who are usually really prepared for Pro level events, and how they react. We give them an hour for deck construction. At a Pro Tour Limited deck construction is easy, because the players know the format so well, and they usually finish ahead of time. At the Invitational they're scrambling to finish, and they take the full hour."

Last year saw a new innovation to the Invitational: The Auction of Champions. Every Constructed deck to win a Pro Tour or World Championships through the years was auctioned off, with bids of starting life totals and cards in hand. This year the auction remains, but instead of using legendary creations such as Zak Dolan's World Championship deck or Kai Budde's Wildfire deck, competitors will be using decks designed by the people. "We're always looking for ways to involve the players more. So far, 3000 decks have been submitted. I'm so happy, because I love to find ways with which we can include people. This tournament is for the fans, and we want them involved as much as possible. We let them vote for the players, and we let them build decks. I'm really excited that there's going to be thousands of decks to pour through. It's too bad that there's going to be plenty of creative decks, and that we can only pick seventeen."

The other development that has generated plenty of excitement among spectators and competitors alike is the inclusion of 5-Color as a format. This is especially interesting because 5-Color was invented by a player, and is not designed or sanctioned by the DCI, yet it has become quite popular. "A lot of formats we do are stuff that comes from different places. Some are internal, but it's a compliment to Kurtis Hahn that he made a format that attracted a lot of people. Magic is the people's game. Wizards of the Coast makes the cards, but in the end it's the people that choose what to do with it. Making 5-color a format for the Invitational is a way to say 'Every idea we do doesn't have to be something we generate.'"

Just as it is an innovation to see Pro Tour players shuffling 250 card decks and playing with Contract From Below, the Invitational marks another innovation where location is concerned. The event hits Africa this year and will run concurrently with a Grand Prix, and will be the first time a major event has made its way to the continent. "There's been a big tournament structure in South Africa for a while...the European office has been running tournaments there for years. This is the first time we're having a Grand Prix there. Also, this is the fifth continent we've had the Invitational on. We haven't done North America or Antarctica, and I don't have a lot of hope for Antarctica." Bringing the tournament to an entirely new location will provide a unique experience for the competitors by bringing them to a part of the world they wouldn't normally visit, and gives the Magic community in South Africa something to be excited about. "It's always interesting when we go someplace new. I think the more off the beaten track we go, the more exciting it is for people out of the way to see top players. The average South African player has never met a Jon Finkel, and it's nice to give a taste of the Pro Tour to different places."

Perhaps the most important aspect of the Invitational is that it presents Magic from a different perspective. "The invitational to me is a celebration of Magic. It says 'Yes Magic is competitive, but it can also be fun. It can be enjoyable.' It's great to have tournaments where people are clenching their fists and being competitive, but it's also good to have people laughing and having a good time. All the premiere events are competitive, but there's also one that's fun." Even though most Magic players live far away from South Africa, they will still be able to follow the action with Sideboard's online coverage. "If you've never watched the coverage of the Invitational, it's something that is really fun. Because there are so many formats and a lot of personalities, there's a lot going on. It's meant to be a spectator's tournament. It's a lot of fun, and I suggest checking it out. It's not your average tournament because it's designed to be as cool as possible for spectators."