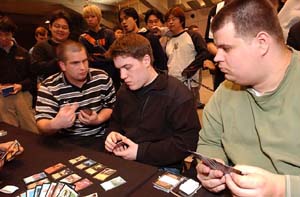 German Team Phoenix Foundation faced off against Japanese Team Panzer Hunters in the finals of the Masters series in Osaka. The winning team stood to win $60,000, while the second place team would take home a cool $30,000. The Hunters consisted of members Reiji Andou in the "A" seat, Kazuyaki Momose in the "B" seat, and Itaru Ishida in the "C" seat. The Foundation included Marco Blume in the "A" position, followed by Kai Budde in the "B" and Dirk Baberowski in the last seat. The Japanese team won the die roll and choose to have the Germans begin with the first pick.

As the draft began, it was clear that Kai was calling all the shots for the German. They had a game plan: since usually the middle seat of the draft ended up with Red/Green, they would have Budde draft a White/Blue deck, since that defensive sort of build can usually stymie a typical R/G offensive construction. Dirk wanted to end up with a Blue/Green deck that fit his play style of attacking with janky evasion creatures such as Thought Nibbler and Escape Artist, backed up by pump spells such as Nantuko Disciple. This left Marco as a Black player, although it wasn't clear what his second color might be coming in.

On the other hand, the Hunters seemed to adopt a much more flexible strategy, waiting to see what the Germans would take and then drafting cards to specifically counteract their opponent's decks.

The players did not uniformly set their colors from the beginning. Although Kai stuck to White/Blue and Marco opened with a first pick Dusk Imp, Itaru seemed to jump from White to Black and then to Blue, taking Divine Sacrament, Cephalid Looter, and Repel over the course of the first few packs. Kazayuki immediately went Red/Green, which must have thrilled Kai to no end. Reiji flittered around with some Black and Red cards before giving up his early Halberdier and Blazing Salvo to draft blue.

It wasn't until the third pack that some real bombs hit the table. Itaru opened up the first pack of the draft that would net his team consecutive picks, and suddenly his deck had a Cephalid Looter, while Momose scooped up the game-winning Overrun and Reiji eagerly nabbed Mortivore. Baberowski happily took Nantuko Disciple and Krosan Archer (on the wheel) while Kai ended up with a Shelter from that same pack.

In the fourth pack, Kazayuki took Chainflinger, a card capable of dismantling an entire White/Blue deck on it's own. This visibly upset Kai, who had hoped not to face the bane of his strategy. Things got worse for the Germans as Reiji opened up a bomb in his colors the very next pack: Upheaval. The Japanese team seemed to be getting all of the best cards in the format, although the last of the clockwise Odyssey packs yielded a Kamahl, Pit Fighter which worked its way three seats down to Marco, cementing his colors as Black/Red.

The Phoenix rose from the dead in the next set of packs, easily opening higher quality cards than their opponents. Dirk added an Overrun to his Blue/Green deck, while Marco picked up two Whispering Shades, which would surely be crucial in his matchup against Reiji's Blue/Black deck. Itaru began to put together a really interesting White Weenie deck, adding a Pianna to his Divine Sacrament and host of other white creatures. 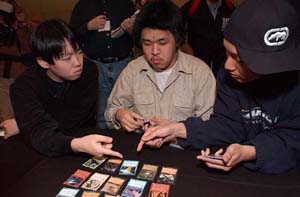 One of the crucial moments in the draft came when the Japanese team decided that Itaru should draft a Deluge to counteract Baberowski's Overrun, leaving the very powerful Caustic Tar in the draft for Blume to take. This enchantment usually causes all sorts of problems for a Blue/Back deck to battle.

As Torment rolled around, the two teams looked to be evenly matched. Marco got an early Faceless Butcher. That same pack contained a Stern Judge, which can ordinarily win games on its own against a Black deck. However, since Marco was Black/Red against Reiji's Black/Blue deck, and Dirk would be only splashing white against Itaru's deck (which looked to be splashing just a hint of black cards), the Judge didn't end up going until 7th pick.

Then both teams started making some questionable picks. The Panzer Hunters faced the decision of divvying up a Compulsion, Circular Logic, Mesmeric Fiend and Mind Sludge between them, after Marco took a first pick Cabal Torturer. They decided to ship the Fiend to Reiji while Itaru took the Compulsion, even though Itaru's Blue was much weaker than Reiji's. Moreover, Reiji stood in a better position to abuse putting cards in his graveyard (having already drafted two Frightcrawlers, a Dirty Wererat, and a Mortivore), while Itaru had already taken a Cephalid Looter to go with his Divine Sacrament and Mystic Penitent. Had Itaru taken the Fiend or Circular Logic, that would have let Kazuke take out the remaining card, giving Compulsion to Reiji. This would have left the Germans with virtually no good cards to take for their decks.

Later on, in the same situation, the Germans were faced with Temporary Insanity, Mesmeric Fiend, Militant Monk and Compulsion, after Reiji wisely counterdrafted Vengeful Dreams away from Kai's deck. Dirk chose Compulsion and Kai picked the Monk, but Marco (urged by Kai) ended up with Mesmeric Fiend. Kazuke happily took the gift of Ray of Command, which many feel is one of the best cards in Torment for draft.

In the final pack, Kai finally found his answer to Chainflinger: Stupefying Touch. He joyously (for him, at least) slammed the enchant creature onto his pile of cards, and Marco added a second Faceless Butcher to his draft pile. In the end, here were the matchups:

Marco (B/R) versus Reiji (B/U), with a slight advantage to Marco due to the two Shades.
Kai (W/U) versus Kazuke (G/R), with Kai having all the right answers to stop the assault.
Dirk (G/U/w?) versus Itaru (W/B/u), in a match where neither player has a clear advantage.

The Panzer Hunters have a long road to climb in order to defeat the Phoenix Foundation. Will the Japanese upset the Germans, or will Kai finally win the last title that has eluded him in his dominance of the game of Magic: Master's series champion?