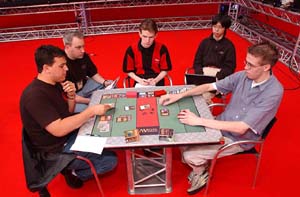 The Netherlands's Alexander Witt is trying to live the impossible dream: grind into the Masters via the Gateway, and then with the whole thing. He is currently 9-0 in both tournaments combined, a feat that prompted Head Judge Rune Horvik to comment: "His rating is like 3000." In his way is Justin Gary, the last hope of a surprisingly ineffective American contingent. Witt is playing Super-Gro with 14 lands, Werebear, Meddling Mage, Quirion Dryad, and Mystic Enforcer. Gary is playing Counter-Oath with an atypical creature set of two Morphlings and a Spike Weaver.

The players had access to each other's decklists, and both put in many hours of playtesting yesterday – Witt with Tom van de Logt, Jeroen Remie, and other Dutch players; Gary with Rob Dougherty and the rest of the Your Move Games gang. So there should be no surprises.

Witt won the roll and decided to play first, and took about three minutes to decide to keep his opening hand. Gary knew right way he wanted to keep his. Witt led off with Flood Plain and a Land Grant, revealing Daze, Sleight of Hand, Swords to Plowshares, Gush, and Mystic Enforcer. Justin wrote it all down, then spent 30 seconds bluffing Force of Will. Justin then drew said Force of Will on his first turn.

The next few turns were all about posturing: Sleight of Hand, Brainstorm, Brainstorm with Flood Plain for shuffling. Then Witt attempted a Meddling Mage. Gary had two Forces of Will and a Swords, so he let it resolve. Witt named "Oath of Druids."

Witt let the Sylvan resolve, attacked for two, then tried for Winter Orb. Gary Force of Willed (pitching Brainstorm), and Witt responded with a Gush. He let the Force resolve, then cast another Orb. This one hit the table.

Gary then looked at the top three with Sylvan, and agonized over taking Impulse, Wasteland, or Morphling. The moment made me recall an argument I had earlier in the weekend with another member of the Sideboard staff; he was arguing that making the correct play in Magic is not "rocket science." Just this one activation of Sylvan Library was enough to illustrate just how delicate some of the decisions in this game are.

Gary chose Impulse and passed the turn. Will summoned a Quirion Dryad, and Gary responded by Plowing the Meddling Mage. The Dryad resolved, and Gary put out the Oath on his next turn.

The Dryad beat Justin to 13, but the Oath coughed up a Morphling. Witt was strangely prepared – he cast three consecutive Swords to Plowshares when Gary attacked and pumped up the Morphling. Gary couldn't believe it, and instead of using his last two cards to Force of Will the final Plow, he just let the Morphling go away.

The two-Morphling plan paid off, and Gary just Oathed up his other one. He then Plowed the Quirion Dryad during Witt's upkeep so that Oath wouldn't trigger. Morphling swung in. A turn later, Witt, still creatureless, Oathed up a Meddling Mage and named 'Counterspell.' 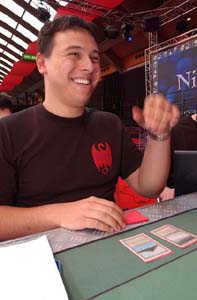 Justin's Sylvan Library was treating him well – he found a Powder Keg and cast it. Witt Forced, but Gary Forced back, emptying his hand. But the Keg was out, and in two turns he could get rid of the Orb and the Mage.

Witt managed to get four land untapped and cast Mystic Enforcer. Gary tried to Counterspell it, and Rune Horvik had to remind him of the Meddling Mage.

Gary, down on creatures, Oathed up his Spike Weaver. Witt attacked with the Enforcer, Gary fogged, moved a spike counter onto the Morphling, and Kegged for two, killing the Mage and the Winter Orb.

On his turn, Gary moved the last counter onto the Morphling and attacked for six.

Justin tried to Plow Witt's Enforcer during Witt's upkeep to avoid letting him Oath. He knew Witt had one Daze, but I don't think he was prepared for the Foil and the second Daze which were enough to win the fight over Justin's Counterspell.

The Enforcer swung and knocked Justin to a mere 4. With no Spike Feeder in his deck, he had to rely on the Weaver to keep him alive, so his life total was of some concern.

Justin attacked back, knocking Witt to 12. But Witt had another Winter Orb, which he cast in the hopes of limiting the Morphling's effectiveness. Justin had enough mana, however, to be brave and he attacked Witt down to 7. On Witt's turn, he attacked back, forcing Gary to use lots of mana to untap the Morphling, and give it flying and a 7 toughness.

On Justin's turn, he had two untapped mana – just enough to attack and pump up the 5/5 Morphling to 7/3. His Sylvan did not give him a land that came into play untapped, so he had to go for it and pray that Witt did not have the fourth Swords to Plowshares.

Justin gained 6, but now both of his Morphlings were removed from the game and his Weaver was in the graveyard. The Enforcer whacked Gary down to 4. His Oath gave him a free shuffle and little else, but the Sylvan coughed up – as the third card down, no less – a Swords to Plowshares. He dispatched of the Enforcer and the board was empty with the life totals 13 to 4.

Witt made the first move in the "new game" with a Werebear. Justin tried to counter, but Witt tapped his last five mana to cast Force of Will. Justin Oathed up his Weaver, but he had a long road ahead of him.

The Weaver kept the Werebear at bay for three turns, long enough for Justin to find a Treetop Village to block it for another turn wile the Oath could reshuffle and find the Weaver. He also put out a second Oath to insure that he could get a Weaver every time. 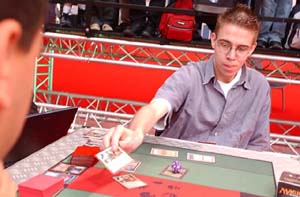 Justin then posed the question: "Can you win this game?" He then went onto explain that he had two Oaths and a Weaver and planned to 'fog' every turn for the rest of the game until Witt was decked. Witt had no more Swords, he had no way to remove the Oaths, and he had no way to deal damage other than creatures. Witt thought it through for a minute, then scooped 'em up.

Gary sided out his Impulses and Fact or Fictions for a combination of Pyroblasts and Calls of the Herd.

His opening hand was a bunch of land, a Gaea's Blessing, and a Force of Will, but he Wastelanded Witt's first land and dropped a Treetop Village. Even the lands are game-winners in the Extended format.

Witt had ample lands, however, and he dropped out a turn-3 Meddling Mage naming 'Oath of Druids.'" Gary, predictably, had just drawn the Oath and was none too happy with Witt's decision. As punishment, he Wastelanded another of Witt's lands.

Witt cast Land Grant, revealing two Winter Orbs, a Daze, a Werebear, and a Brainstorm. He cast the Werebear with five cards in his graveyard. Gary did not want the Bear going large, so he Gaea's Blessinged a Land Grant and two dual lands back into Witt's library.

Witt dropped a Winter Orb, Gushed, and attacked for 3. Justin's hand was pretty poor at this point: an uncastable Oath, a Spike Weaver, a Force of Will, and lands. The only saving grace might have been the Seal of Cleansing, but Witt had at least one more Orb in his hand.

Witt made a large error when he tapped two land, Gushed, then played a Tropical Island Instead of a Tundra and tried to cast a Mystic Enforcer with no white mana. He had to cast his other Winter Orb and burn for two. Hey, redundant Winter Orb and two damage is almost as good as a 6/6 flier.

Gary mustered enough untapped land to attempt a Spike Weaver with one land up for Daze. Witt Force of Willed it, and Gary Forced back. The 3/3 was in play, but Witt had threshold and attacked with Werebear. Gary took the damage, down to 7.

Witt got back up to 4 mana and played the Enforcer correctly. Gary was holding Swords, so he wasn't too concerned. The Enforced went away.

Justin had to double-block the Werebear with his Weaver and a Village, which set him back on mana. Witt resolved a Dryad and attacked for two with the Mage. Gary had Powder Keg in his hand but didn't cast it because of Daze. It was all up to Treetop Village #2 to hold down the fort. 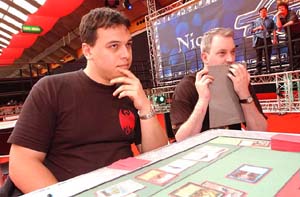 Witt had no fear, sending the 1/1 Dryad and the Meddling Mage into the Red Zone. As predicted, Gary activated his Village and blocked the Dryad. Witt had Wax/Wane, and Waxed the 1/1 to 3/3 for a trade. Gary fell to 3.

The Winter Orbs prevented Justin from ever being able to get the Village active again before the Meddling Mage killed him. Witt's Mystic Enforcer error did not cost him the game, amazingly enough.

Gary: "Lots of pressure here. Game 3."
Witt: "There hasn't been a lot of pressure on me this tournament."
Gary: "True. He splits away all his winnings. He's getting like a tenth of the actual prize."
Witt: "I'm playing for fun."
Gary: "Is this even fun?"

Justin's opening hand contained a Wasteland, a Village, a Pyroblast, and 4 blue spells. He kept it, and drew two dual lands right off the top. No wonder he's in the Finals.

Witt played out a quick Werebear, and Gary Forced its Will, pitching a Morphling. He then tried for Winter Orb, and Gary countered. Gary then Wasted another of Witt's lands and dropped out a Seal of Cleansing as future Winter Orb insurance. When Gary later animated and attacked with his Village, Witt Waned the Seal.

Witt untapped and cast another Winter Orb, which Gary tapped out to Counterspell. Unfortunately for Gary, Witt had Force of Will, and Gary was now tied up with the Orb once again. Gary managed to get an Oath out, but Wit had another Wax/Wane. 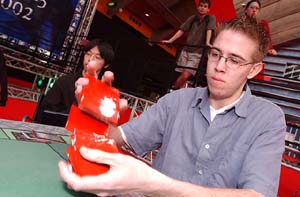 Gary: "I thought I baited that with the Seal! Oh, well."

Witt put out a Meddling Mage, and Gary decided to wait and see what he named before Pyroblasting it. Witt named 'Powder Keg,' and Gary let it stay.

Justin then pulled Call of the Herd off the top and cast it. Witt was slightly surprised, and the two traded attack phases for a while, until Witt finally put out an even bigger creature – Mystic Enforcer. The 6/6 flier attacked Gary down to 1 before Justin drew a Swords at the last possible moment. Witt had put out a Dryad the turn before, so he Dazed the Swords just to get a counter. Werebear came off the top, and with his mana all choked by the Orb, Justin Gary could not defend his last life point.

Alexander Witt does the impossible – wins ten straight against the best players in the World to earn $25,000.00.