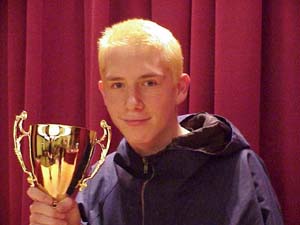 What's the name of your deck, and why did u choose it to play it?
The deck's name is Mr. Wilson. It's because we put an Obliterate in the sideboard as a joke. In the Argentinian Nationals, some players put a Coalition Victory in their sideboards, just to give some help to their opponents.

I played it because, thanks to the UG, I won $180 and my third bye so there was no reason to stop playing it. When I saw the version with red, i even liked it more and with some friends we modified a lot of times until we got to the final version. We started with David Price's version, but we didn't like it at all because it was just like 4 of every card, so we cut out some cards to add another ones.

Why did you thought it was the best deck to play?
With all my playtesting, I knew that I had a very bad matchup against Domain and Solution/No-Mar but, as the only ones playing these two deck would be the Americans I thought my chances were very good.

What does it feel to make your first Top 8 in an international tournament, and even more, win it?
It's great! More than great, excellent! Really I didn't come to win the tournament, it was more to have some vacation, miss some school days and have fun....and well. I won. And I get the $3900 home.

And what if would have lost in the finals?
It would be ok too. I would also get a lot of money but I wanted to win. All the Chileans were very cool, because they wish me the best luck and they wanted me as the champion. But really, I wanted to win the trophy and get it to Argentina. Before entering to the top 8 they told me that the last time, a Mexican took it (GP Buenos Aires) so now it was Argentinean's time.

U have fame of a great topdecking. Does your victory have a lot of that?
No, praying to god is also very helpful. Yesterday I prayed to be in the top 16 and take some bucks. But wait! I pray every night but yesterday I really asked for some luck today. Talking seriously, a friend of mine used to play Chess in a professional way. His mother died and before every game, he prayed.... and so I get used to it. But I don't do it always because it's too much.
That's why I got very bad at Nationals and in the Latin American Tournament. For asking for more than what I deserve.
But some luck is always good. That Urza's Rage in the finals was great.

Are you going to keep traveling outside Argentina to play Magic?
Sure! More now that I won money. I will use it to go in December to Curitiba, Brasil. And maybe to Pro Tour New Orleans. Also, my parent need some help.

Anything else you wanna say?
No, nothing. Thanks to all my friends, especially to Nicolas Otatte, and everyone who trusted in me.