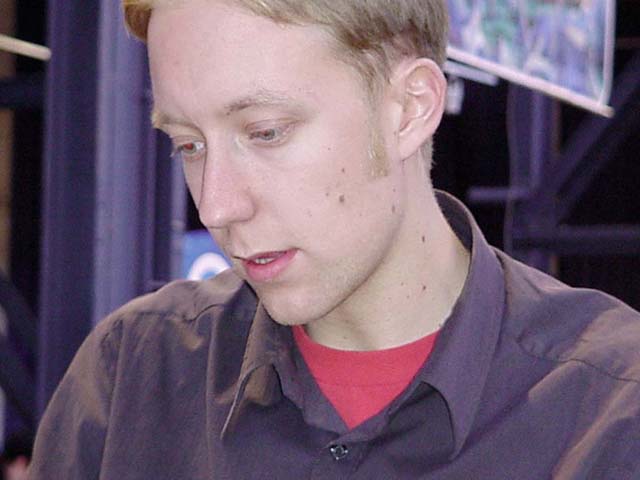 "It's lovely to have a Grand Prix in your own city. You can sleep well, eat well and it doesn't cost you anything," Mattias Jorstedt smiles. The Gothenburg resident is one of Sweden's Pro Tour veterans, and now, he is looking to do well in his own country. "That would be fun," Mattias thinks. "There are plenty of good Swedish players, and there will probably be three or four in the Top 8."

Mattias has previously done well in the Invasion block Limited format. In Manchester he finished fifteenth, in Helsinki he made the top 12, in Amsterdam he finished 50th, then in Valencia he failed to make day two while then getting 37th in Prague. "The format is very balanced, but skill-based. Deckbuilding can often be hard. But most of the time, you've got something to work on. You rarely open a very weak deck," Mattias thinks.

His strategy for the format is generally to sort out the various colors. Then, he goes on to sort out all the unplayable cards, before looking through the gold cards and the cards with multicolor abilities and so on to see what color combinations might be good. "Removal is good, and creatures, and good mana," he says.

Mattias also reckons that the rares are pretty important. "If you succeed in getting one or two really good rares that fit into your deck, then that's a great advantage," he says. In Valencia, Mattias opened five unplayable rares and went 0-3. This time, his rares were again weak. "I opened four unplayable rares," he says, fanning out Stand or Fall, Teferi's Response, Skyship Weatherlight and Forsaken City.

This is the card pool Mattias opened:

"My first impression was that it looked bad. When I looked through the Invasion cards, I found perhaps ten weak commons in a row, and then I thought it was over. But the gold cards help, and I got one good rare, a Blind Seer," Mattias says.

The Swede quickly noticed that all his removal was red or black, and in addition, he had some bounce cards in blue. From there, it was a rather easy choice to go for red, black and blue - a very common color combination in the format.

This is the deck Mattias constructed:

"There were twenty cards that had to be in the deck," Mattias says. He pondered on the last three though, but chose to add a Dream Thrush, a Slimy Kavu and a Maniacal Rage. "The Thrush and the Slimy Kavu can improve the mana in addition to them being creatures. Maniacal Rage was the best card that was left," he says, picking the Rage over Opt, Prohibit and Urborg Skeleton.

Altogether, Mattias isn't too disappointed with the deck. "I've got good early creatures like Vicious Kavu, Shivan Zombie and Urborg Drake, although they are kind of mana intensive. Then I have good spells like Exclude, Rushing River and Probe, and they can take care of some problems. Blind Seer is probably the best card. I can do various tricks with it, for instance protecting creatures against black removal. I can also use it along with Shivan Emissary, Phyrexian Bloodstock and Slingshot Goblin."

Mattias reckons that he can get mana problems though. Still, he predicts that he may get a 2-2 or a 3-1 record because of color screw and some substandard cards in the deck. However, along with three byes, both those records will be enough to make the second day. And from there, Mattias hopes to make the top 8. "In Tokyo, Ryan Fuller said that 'I'll take Tokyo, and you can have Gothenburg.' I hope he keeps his word," Mattias grins.