One of the more fun cards to come out of Mirrodin is the Mindslaver, since not only does it let you do something that's never been done in Magic before, it also creates some hilarious stories. After every round you'll find players clumped together in groups, sharing some of the plays that they've forced their poor opponents to make. Below are some of the highlights that have made their way to me.

Eugene Harvey, playing Tinker, Mindslavered his opponent, who was sitting with two lands and a Birds of Paradise not long after an Upheaval. The hapless opponent unfortunately neglected to cast the Vampiric Tutor in his hand, so during upkeep Eugene cast it for him. Cabal Therapy was brought to the top of the deck and immediately cast, getting rid of the two Pernicious Deeds, and then flashed back by sacrificing the Birds for Haunting Echoes. With Eugene having a full grip of cards, it didn't take long for him to overwhelm his opponent, who only had a Ravenous Baloth and a couple lands left.

Morgan Douglass's opponent had just cast both Goblin Recruiter and Charbelcher, preparing for a kill the next turn. Mindslaver showed up at just the right time and directed his opponent to commit suicide instead.

Osyp Lebedowicz Mindslavered Matt Rubin, who had Food Chain in play and was set up to pull off the combo on his very next turn. Osyp proceeded to run through the entire combo for him, getting every single one of MattR's goblins into play, and then sacrificed all of them to the hunger of the Food Chain. Good game.

Time To Give Up 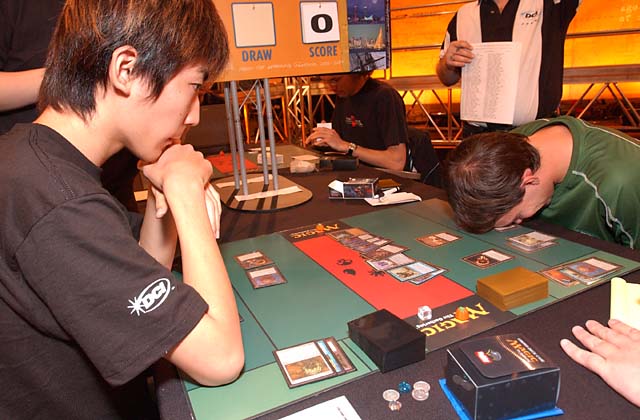 Adam Horvath used Mindslaver on an opponent who was playing White/Blue control. His opponent then pitched a Plains to Abolish his own Chrome Mox, cast Opt, chose not to take Cunning Wish, got Brainstorm instead, and cast it. The good cards left in the hand were put on top of the library, then a Flooded Strand was played and sacrificed, shuffling them away. Adam failed to find a land, and when he used the last mana available to cast Enlightened Tutor intending to put a useless Chrome Mox or the like on top, his opponent gave up and scooped.

Andrew Cuneo had just cast a turn three Hermit Druid after having it bounced on turn two. Craig Krempels untapped, generated a bunch of mana off of a Metalworker, cast Mindslaver and activated it, then passed the turn. Cuneo revealed his hand, looked at Craig. Craig looked back at Cuneo. Cuneo, still waiting, said, "You're controlling my turn." Craig then told him, "Well yeah, so go ahead and draw." Cuneo does, and then Craig tells him to activate his Hermit Druid. The entire deck flips into the graveyard, and realization dawns on Craig that he just missed an easy kill. Regardless, he still has the win by casting a Reanimate from Cuneo's hand on Sutured Ghoul, removing all the creatures in the graveyard, and then sacrificing it to a flashed back Cabal Therapy. How lucky.

Not the Worst Mindslaver Ever

Adam Horvath activated Mindslaver while playing Craig Krempels, who had two Metalworkers, a Grim Monolith, and an Island on the board. Craig flipped over his hand, laughing and saying "Worst Mindslaver ever". His hand? Metalworker, a Seat of the Synod, and an Island. Not too impressive. But his draw step? Stroke of Genius. Adam drew ten cards and went on to win the match. Stroking your opponent just doesn't pay off when it's for less than forty.