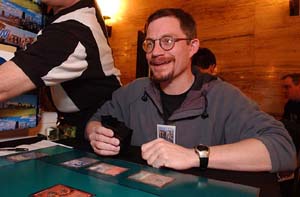 Over the ten years that Wizards of the Coast has been producing Magic, the company has stolen quite a few players from the Pro Tour and turned them into employees. Matt Hyra was actually the first – he played the very first Pro Tour and then joined up with WotC customer service. Henry Stern was next, leaving the Tour for R&D at the end of its first season after putting up his second consecutive Top 4 finish at Worlds. A year later Jeff Donais joined the organized play department and now runs the Pro Tour. In the wake of the Urza's Saga block, there was a flurry of hirings by R&D that included myself, Mike Donais, Brian Schneider, Elaine Chase, and Worth Wollpert. A little over a year ago Aaron Forsythe joined the company so he could run Magicthegathering.com and recently Alan Comer joined on to help program Magic Online.

Until this weekend, no one had ever gone in the other direction. That is, no Wizards employee had ever left the company and then gone on to qualify for the Pro Tour. However, Mons Johnson pulled off exactly that trick. Mons was a childhood friend of Richard Garfield and he helped playtest Alpha. He joined on with Wizards shortly after Magic turned into a phenomenon at a point when the company had about 80 employees.

A couple of years ago, Mons decided that he wasn't really enjoying his work (running the R&D games library) so he gave his notice and left the company to pursue other opportunities. He still loves Magic, however, and he particularly enjoys goblin decks. Two Extended PTQ seasons ago he made a Top 8 into the teeth of Donate decks and Miracle Gro decks with a Goblin Lackey – Goblin Recruiter – Goblin Ringleader deck of his own concoction that has been nicknamed "Goblin or Fiction." After the Extended rotation, where his deck lost nothing, he was able to win a PTQ and advance to the big show.

Luckily for Mons, goblins are playable in Onslaught block constructed too. He put together a black-red goblin deck which attempts to use Oversold Cemetary to give itself some staying power. Unfortunately for Mons, he ran into some other goblin decks that were able to run him over before he could get his engine card advantage running. When I talked to him he commented on how ironic it was that goblins were the thing he was losing to. Goblin Goon in particular was just too big for his removal spells to deal with.

So WotC's first contribution to the Pro Tour didn't work out all that well, but I doubt this will be Mons's last trip and I doubt Mons will be the last person to move on from the company but keep playing Magic.