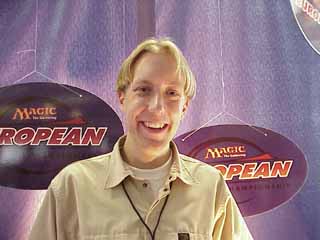 Mattias Jorstedt from Gothenburg in Sweden has a reputation for always coming in second. Maybe not exactly second, but still, he has had an awful lot of almosts for one player. Right now, he is struggling to qualify for Worlds. In the Swedish nationals, for instance, he finished seventh - close, but not quite. His ranking was good enough for him to get an invitation for Worlds, though. But a two and half month old side event went into the ratings one week before the cut was made, and Mattias barely missed his invite.

"I've been annoyingly close," Mattias admits - a fact that makes him even more determined to try and make it this time. And naturally, he is really happy that the slots for Worlds will be passed down if the top 8 is qualified already. Last year, it wasn't so. The Swede fought his way to the top 8, playing his own version of the Iridescent Drake deck. Mattias was the only one among the eight who wasn't already qualified for Worlds, but he finished fifth and ended up with another almost.

This year, though, he has a strong team in his back. A member of the new and prominent team, The European Alliance, Mattias has spent approximately three hours a day on the internet during the last three weeks, preparing for the European Championship. "I read articles, go on IRC and draft, so that takes a lot of time. I could easily spend three times that time, but most of the players in Gothenburg have a summer job," he explains. Mattias doesn't have a summer job. Or he had one, but they had double booked it and Mattias ended up playtesting and going to Turkey with his girlfriend instead.

"The European Alliance works really great. We're relaxed, and the people are fun and the ideas are good," Mattias says, wisely keeping his mouth shut when asked about secret tech. "You'll see tomorrow," he smiles, but reveals that at least they have good versions of already existing archetypes. Mattias expects the format to be dominated by Replenish, Angry Hermit and Stompy. Personally, he likes Replenish, but he is too afraid of all the anti-Replenish cards to play it.

Mattias' strengths are that he makes relatively few mistakes and that he is a relatively good deckbuilder. He has been playing for a long while, since The Dark hit the shelves. For a long while, he was the guy that lost in the semifinals of the Pro Tour Qualifiers, but at least he seems to have moved his problems up one level. And by qualifying for Worlds in this tournament, he can break his little curse and forget about for instance when he lost the last round of 2000 Pro Tour New York where a victory would have put him in top 8. Or when he lost the last match in Grand Prix Copenhagen, missing yet another top 8.

"I hope it evens out in the long run," Mattias admits, optimistic in spite of all his almosts. If it does, then the future looks bright for the Swedish student who never seems to get tired of the game. "I get tired at tournaments, but then I get home, a day passes and then I want to draft again. My goal is to win some money so that I can just play Magic for a year. If I could do that, I definitely would have."