MSS Finals: Blood of the Martyr

his one's for all the marbles-272 players turned out for a chance at $100,000 worth of scholarship money, and we're down to two.

This is the classic archetypical matchup. Aggro vs. control. Mountains vs. Islands. You know the story. At the end of this best-of-three series, the MSS champion will be named and the scholarship money will be given out. 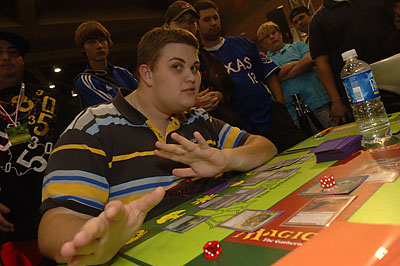 Montalbano jukes for the camera, to no avail.

"I think I only won two dice rolls throughout the whole tournament, but I've won all of them in the Top 8," said Greg Poverelli.

Both players started off the game with a mulligan. Or two.

"So, you want to both go to seven?" said Peter Montalbano.

"Just mull to zeros," came the response from the crowd.

Each player started down two cards, but they still both had turn-one plays. Greg's Mogg Fanatic got to hit for one before eating Peter's turn -ne Birds of Paradise. Turn two saw the decks continue in real fashion as Greg dropped a Mogg War Marshal into play. Peter matched it with a Wall of Roots in what would be a near-perfect first two turns for both decks. If you didn't look at their almost-empty hands, you might not have been able to tell that they mulliganed.

Peter went on a bit of a tear on his next turn, as he played a pair of Coiled Oracles. The first got him the second, which in turn got him a Llanowar Elf. Greg kept the aggression up with a Pendelhaven that he used to make a Keldon Marauders. He also added a Mogg Fanatic and a Scorched Rusalka to his team that was going to prove to be lethal if the life totals got low. It also made sure that all of his trades got him some kind of advantage.

Peter just drew and passed his turn. Greg drew his card, played his Seal of Fire and sent his team in. After some Pendelhaven-ing to keep his creatures alive, Greg had dropped Peter to a mere nine life. Peter tried to get some more men on the table with a Llanowar Elf with a graft counter, but a Seal of Fire made sure it didn't stick around. Another round of attacks put Peter to six. Peter passed his turn again, but made sure to Mystic Snake the Incinerate fired his way on Greg's turn. Unfortunately, that left him wide open to get Charred in the face and the Rusalka finished things off. 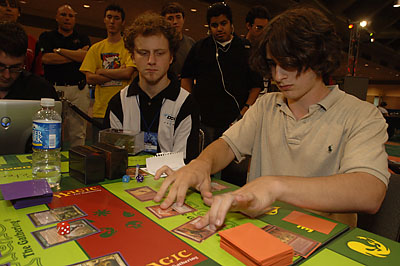 Game 2 saw Peter start the game with a turn-two Coiling Oracle, snagging him a powerful Spike Feeder. A Carven Caryatid on the following turn looked to shut the ground down. Greg had a Rift Bolt suspended, but no really good targets for it when it came down, so he just flung it at Peter's face. For Peter's next turn, he added another Caryatid and a Llanowar Elf to his squad.

Greg was a little short on lands as the game progressed. He wasn't able to find a third land for two turns, but he made the best of those turns. The aforementioned Rift Bolt and a Seal of Fire started the arduous process of taking Peter down. When he did finally manage to get a third land into play, he used a Martyr of Ashes to bait out a Mystic Snake and then played a Tarmogoyf.

Peter played another Coiling Oracle on his turn, this one netting him a Chord of Calling. He also played a morph, which Greg immediately pulped with his Seal of Fire. Willbender down. Greg had another Tarmogoyf for his next turn, but he was a bit behind to understate the case. A Cryoclasm ate a Breeding Pool, but it wasn't going to be enough. When Stampeding Wildebeests came into play via Chord of Calling and got a graft counter, the game looked locked up. Wildebeests + Spike Feeder = More life than you want to try to beat or burn through.

Greg was going to try, though, and he resolved a Martyr of Ashes activated for five that blew the world up and left only two Tarmogyfs and a Wildebeests that survived by virtue of a Spike Feeder counter. They did their job and traded with a Tarmogoyf, but now Peter was down to a single-digit life total and no board. Even worse was the grip that the Martyr revealed. Three Chars and an Incinerate made sure to finish the job the Tarmogoyfs had started, and Greg managed an incredible comeback to steal a game that looked to be locked up to take home the title. 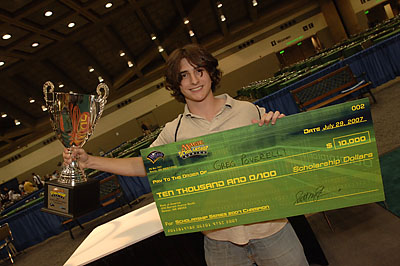