im Landale hails from Boston, Massachusetts. Greg is from Queens, New York and got 15th at last year's JSS National Championships. When asked about his performance last year, Tim groaned and said he'd rather not mention how he did.

As the players sat down for their Semifinals match at the 2007 Magic Scholarship Series, all four of them were abuzz with the game loss awarded to DJ Kastner in the Quarterfinals. The discussion quickly turned to Professional play.

"I just don't want to qualify for another Pro Tour I can't go to," said Poverelli. "I won a PTQ for Kobe, but wasn't allowed to go." The move looks to be paying off for Greg, as the youngster has already cleared at least $5,000 in scholarship money so far this weekend. 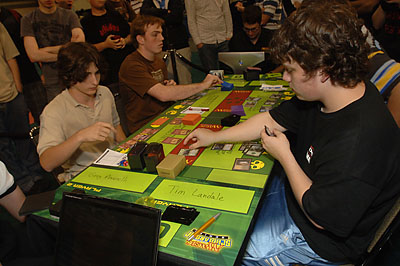 Greg Poverelli and Tim Landale duel for a spot in the Finals.

Poverelli won the die roll, an important feat considering his Project X-playing opponent had already dispatched the other Gruul player in the Top 8. A Mogg Fanatic quickly went on the offensive for him while two Seal of Fires hit play, one immediately sacrificed to kill a Birds of Paradise. Landale followed up his turn one Birds of Paradise with a turn-two Dark Confidant while having to shock himself twice to play two untapped dual lands from the Ravnica Block.

Greg Poverelli missed a turn-three play but his opponent was all too happy to make one of his own in the form of Teysa, Orzhov Scion. His turn-four play looked considerably stronger than his opponent's as well, as he matched a second Mogg Fanatic from Poverelli with a Loxodon Hierarch. The Hierarch quickly bit the dust at the hands of a Char, and Greg made a Keldon Marauders, down to just two cards in hand. The life totals stood 18-14 in Landale's favor, and things weren't looking all that good for the Gruul player as Landale managed to draw the first half of his combo in the form of Saffi, Eriksdotter.

Things got worse as a Chord of Calling found Landale a Withered Wretch, a possible sign he intended to go off by removing his opponent's Mogg Fanatics from the graveyard. Pundits have claimed that the printing of the 1/1 Goblin in Tenth Edition had killed Project X due to the fact the deck relies on Crypt Champion's symmetrical comes-into-play effect, but Landale is proof that's not necessarily the case.

Poverelli spent his board position to ruin his opponent's, sending an Incinerate to Saffi's head and sacrificing both of his Mogg Fanatics to put an end to Withered Wretch. That created a 1/1 Spirit thanks to one of Teysa's abilities, and when Landale attacked with both of his creatures he tied the life totals at 13-all. 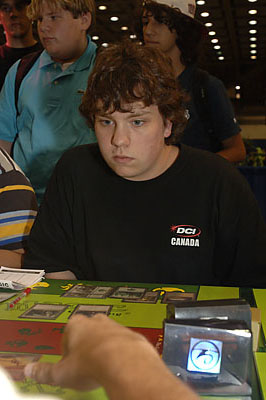 A Mogg War Marshal off the top for Poverelli meant Teysa would be staying home in the short term, but the little Spirit that could kept charging in. After a few turns Poverelli decided to send in his 1/1 Goblins, losing the Marshal to a block from Teysa. Upon doing so he realized he had just missed a point of possible damage from his Scorched Rusalka, which he had failed to play prior to combat in order to sacrifice whichever creature his opponent elected to block.

Poverelli: "If that single point matters, I'm going to be awfully upset."

The life totals stood 11-7 in favor of the Gruul player, Poverelli, but he was certainly on the back foot facing down a Wall of Roots, Teysa, and Elves of Deep Shadow with his Martyr of Ashes and two Goblin tokens. A Pendelhaven helped, meaning he could protect some of his 1/1s or perhaps kill a blocker, but a second Wall of Roots from his opponent put things further out of his control. A Glittering Wish nabbed a Debtor's Knell, and off in the distance a fat woman began warming up her vocal chords.

But Poverelli wasn't done just yet. He peeked at his top card to see if he could do the final 7 and saw… Char! With a Rift Bolt in his hand he had just enough for lethal and quickly dropped both spells onto the table exclaiming "CRAIG JONES!"

Game 2 was quick to kick off and a Wall of Roots for Landale promised to pose big problems for his opponent Greg who followed his turn-one Mogg Fanatic up with a turn-two Martyr of Ashes. Landale didn't seem to mind as he played a turn-three Loxodon Hierarch, though it did cost him a counter on his Wall of Roots. When Poverelli attacked with both of his creatures, however, things promised to be interesting. The Martyr with Greg's nearly full grip could probably wipe out all of Landale's board if he blocked incorrectly. However, it would wipe out Greg's meager forces as well, and cost him the use of two-thirds of his mana for the turn.

Eventually Tim opted to block each creature, come what may, and they were wiped out by the Martyr after Fanatic was sacrificed to ping Landale for 1. Post-combat, Greg played a Martyr of Ashes. Landale had follow-up plays of Wall of Roots into Saffi, then the turn after had a Dark Confidant. A second Martyr of Ashes wiped out that board, and things weren't looking good for Landale. A Loxodon Hierarch helped, but he only had four lands with a single card in hand and his opponent blew up his Plains using Cryoclasm.

Landale wasn't out, however, playing two Essence Wardens on the following turn. Poverelli answered Hierarch with Char, then played a Tarmogoyf and suspended a Rift Bolt. The life totals stood 24-10 in Landale's favor, but his opponent's Rift Bolt knocked out an Essence Warden and he was not in good shape, despite having twice as much life as Poverelli. Keldon Marauders came down trading its comes-into-play point for the life gain from Essence Warden, and Tim Landale could only muster a Swamp before saying go. Starting to get visibly frustrated at his draws, he played a Temple Garden, leaving one mystery card in his hand, then attacked for one with his Essence Warden. 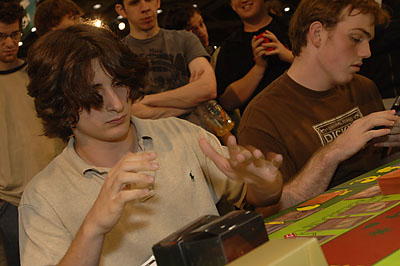 Playing the dual land looked like a mistake as he knew his opponent still had a Cryoclasm in hand. Prior to that, his other lands were Forests, Swamps, or non-basics and the Cryoclasm had been a dead card. He had just activated the possible burn spell, and Greg started doing some math. A Char was fired off at his opponent and he attacked with his Tarmogoyf. Instead of playing the Cryoclasm, however, he played a second Tarmogoyf, then shipped the turn.

Landale was scrapping to stay in it drawing a Saffi Eriksdotter to gain him a life and chump block one of the 'Goyfs. Greg ripped a Seal of Fire and checked the life totals again before saccing the Seal to destroy Essence Warden, then bashing. Tim shrugged and blocked, but it wasn't to be, as his opponent revealed the Cryoclasm and another burn spell and Landale scooped up his cards.

Greg Poverelli wins 2-0 against Tim Landale and advances to the Finals!