his round represented one of the most prevalent control matchups faced all weekend. Peter Montalbano sported a blue-green Chord/Pickles control deck. His opponent this round was Ryan Ward. Ryan has brought his blue-white-red control to the table in an attempt to take home the big prize.

This matchup, or one similar to it, played out more times than I'd like to count throughout the Standard rounds of the National tournament in the last couple of days, and it went both ways, with no deck really having a distinct advantage over the other. 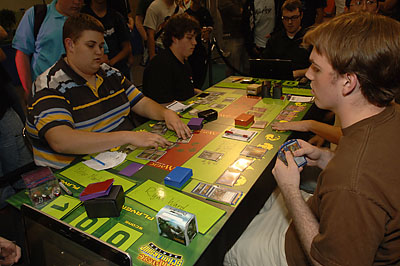 Peter Montalbano, left, and Ryan Ward played out a matchup seen quite frequently this weekend.

Ryan grabbed his first seven cards and grimaced as h had to send them back for a second batch. He was a little more pleased with his second round, and started with a couple of lands and a Remand on Peter's Birds of Paradise fueled Carven Caryatid. Ryan followed that up with a Compulsive research that just filtered a Signet and a Court Hussar to his graveyard. The follow-up Compulsive Research led to another pair of ditched cards, and the distressing lack of a fourth land for Ryan.

Peter used his next turn to amass a small army when he recruited two Llanowar Elves and the powerful Heartwood Treefolk. Ryan finally managed to dig up a fourth land and quickly plopped a Lightning Angel into play. On his next turn, Peter played Chord of Calling to get a Vesuvan Shapeshifter into play to copy Ryan's Lightning Angel. When Ryan said OK and then tried to draw a card, Peter stopped him. "You said OK, which means the spell resolves. Since it's a may effect, you missed the trigger." The judges around the table agreed, and Ryan sighed as he put the card he was about to draw back on top of his deck.
Ryan had a Demonfire to get the Angel wannabe out of the way, and a similar situation erupted. Peter put his Shapeshifter in the bin and then went to draw his card for the Treefolk, but Ryan stopped him. "You put your guy in the graveyard. You missed the trigger," Ryan reminded him.

"We are both masters," Peter said as he put his ill-gotten card back on top.

He didn't mind too much, though, as he simply played and flipped a Brine Elemental. The trigger may have kept Ryan's lands locked for a turn, but the Angel has vigilance, so it kept taking bite-sized chunks out of Peter's life total. Peter took a huge hit out of Ryan's life total with a swing from Mr. Briny and passed the turn.

Ryan played a Court Hussar to dig into his deck, and attacked Peter for three putting the life totals at six for Peter and eight for Ryan. Peter sent his Brine Elemental in for the attack unafraid of the potential trade and wasn't too disappointed when Ryan just chumped with his Hussar. He also had a Mystic Snake for Ryan's attempt at a lethal second Lightning Angel. Ryan shrugged and dropped Peter to three. All Peter had to do was untap and send in the team to deal the final points of damage to end the game. 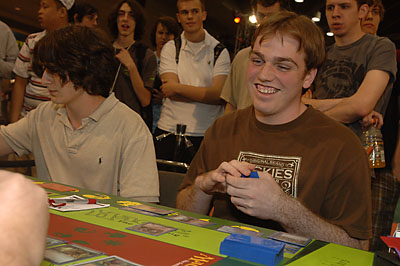 Ward hopes his Game 2 chances are better than what happened in Game 1.

Game 2 started with Peter accelerating his mana with a turn-two Wall of Roots, and Ryan improved his hand with a Court Hussar. Peter played a Heartwood Treefolk on his following turn. Hopefully this game, the players remember how the trigger works.

Ryan played his fourth land, turned them all sideways and put a Lightning Angel directly into attack formation. Peter took the hit and dropped to 17. On his turn, he put a second Wall of Roots and a morph into play. Ryan offed two of Peter's men on his turn with an Incinerate to kill Peter's Heartwood Treefolk, and a Lightning Helix to kill a Willbender that never got to turn up. Peter simply shrugged and rebuilt his army with a Birds of Paradise, a morph, and a Scryb Ranger that got a graft counter from a Llanowar Reborn.

Ryan tried to refill his hand with a Compulsive Research, but the recently played morph was a Willbender that redirected the card-drawing spell at Peter instead. Ryan tried to follow that with a Sacred Mesa, but a Mystic Snake answered the Chord of Calling to put a stop to that. This left Ryan with only one card in hand. He drew his card and thought for a second. Wrath of God? How about another Chord of Calling for Mystic Snake. Seems fair.

Ryan was ready to end his turn, but Peter insisted on flashing a Teferi out before his own turn started. Ryan ate some damage and seemed unfazed, really. He just untapped and played another Wrath of God. Peter scooped all his men up and put the refuse bin. He untapped and put a morph down to replace what one second ago had been a fairly sizable force. Fortunately, Ryan was a bit low in the life department, and between the morph and a Treetop Village, he was brought one turn from death.

"You've played two Wraths this game? Let's see if you can get a third."

When he couldn't, Ryan conceded.