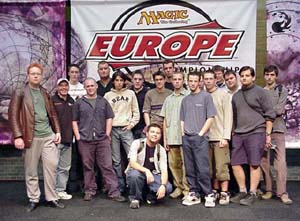 We all know there are a lot of ways to qualify for a European Championship. Some people get here through the golden road: Pro Tour points. They had a great year on the Tour and this is just another part of their reward. Some get here on ranking. They have worked hard, some of them in the last few possible weeks, to win a place in the top places of the European ranking.

And then we have Nationals. Those are always special tournaments in every country that qualify eight players for Euros. In each of the thirty-something countries represented in this room, all of them having their flags up above them have someone here who they call National Champion. (Sorry, Wales and Poland, your countries are so popular the flag suppliers had run out of stock...)

So today we tried to play a small tribute to those players, the ones who got here—well, some would still be here by other invites—by being the best in their countries. As you might expect is not a bad list at all. The picture shows most, though not all of them.

We have the current World Champion, the repeating Dutch Champion Tom van de Logt. We have several players with Pro Tour Top 8 finishes, team-mates Tomi Walamies from Finland and Anton Jonsson from Sweden for example. Hey, we even have the best player in the World, also known as the Pro Tour player of the year: Kai Budde, from Germany!

Here is a complete list of the European National Champions.