Needs to Do Well 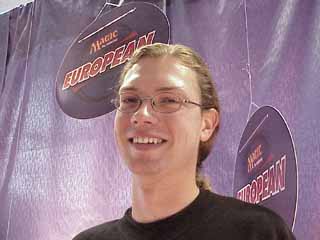 Christian Lührs got his international breakthrough in 1999 Pro Tour New York. The German from Bendesdorf outside Hamburg took his green deck all the way to the top 8. He followed up that performance in 1999 Pro Tour Chicago, where he made yet another top 8. This year has been rather quiet, though, and if Christian doesn't get any strong results soon, he might have to quit. "Last year was great, this year I haven't won anything. So if I don't do well at Worlds, I will think about quitting Magic. I want to study, because I can't live by the prize money," Lührs says.

The German enjoyed himself at the Euro Championship, except from that he didn't really like the location. "It's ok, not very nice. I don't like the industrial style, I prefer something with atmosphere, like the Queen Mary," he admits. The tournament itself, however, was better, and Christian started out pretty well. In the first draft, he won the pod with a strong red and black deck. Then, blue came to him in the second draft. He got a second and third pick Waterfront Bouncer and a third pick Belbe's Armor. "That's definitely a first pick card, and it shouldn't happen on the first table," Christian laughs. He ended up with a strong blue and black deck, but somehow managed to go 1-1-1.

In the Standard portion Christian chose to play a Tinker deck with Goblin Welders and Smokestacks. "Welder is an amazing card. I welded the Smokestack and one of my opponents got his Processor welded away. He only got to make one token, and I could tap it with my Ring of Gix," Christian chuckles. The German avoids the most popular decks, instead he tries to make interesting alternatives that are fun to play. Unfortunately, Christian had a 3-2 record when one round was left of the tournament, which meant that he was out of contention for top 8. "I'm a little bit disappointed, but I had to mulligan in both games. That's Magic," he says after losing his second match of the day.

Before the European Championships, Christian drafted every week and played Type II for the four last weeks before the tournament. "I didn't test that much," Christian admits. "But the Euros is no that important. I'd rather do well in a Pro Tour or Worlds." He likes the current Standard format, and will prepare before travelling to Brussels in a few weeks. Of course he won't reveal what he will play, but he doesn't rule out the Tinker deck. The draft format, on the other hand, is too luck based in his opinion. "It is slow, and you have to open good cards. That's why the good, German limited players didn't do well."

In addition to Standard and Limited, Block Constructed is one of the formats that Christian has to master in order to do well at Worlds. "I haven't played Block Constructed since Pro Tour New York, and that was a disappointing tournament. I went 4-3. Maybe I can find something special, but it is difficult, because the card pool is so small," he says. Hopefully, Christian does well enough to reach his goal, to get enough Pro Tour points to get to play in the Masters. Then maybe we will continue to see the smiling German at Magic tournaments.