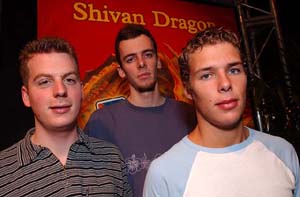 Mired in eleventh place after day one, the Netherlands—considered by many to be the most talented National team in the tournament—looked to the booster draft format as their ticket to the top. Both Kamiel Cornellisen and Noah Boeken have had success on the Pro Tour in draft formats, and national champion Tom van de Logt is no slouch, either, having made the top 8 in World Championships twice before.

Cornelissen was the star of the team on Thursday, winning five of his six matches and getting a draw in the other. Boeken and van de Logt both put up respectable 4-2 marks, and combined the three did better in the format that any other national team.

Cornellisen said his strategy was to draft "white-blue a lot, and never draft black." The defensive nature of white-blue, combined with its fliers, are a lethal combination. And while black has plenty of good cards, the erratic nature of Torment means fighting for it is a risky proposition.

Even with all their success, the Netherlands still begin Day 3 a few points behind Ireland. Will they have what it takes to come out on top today? "We have a good mono-black deck," said van de Logt, "but it's hard to say just how good because all the decks are the same in this format."

The race to see which countries will play in the finals will heat up today, and culminate tomorrow with the team Rochester format.