As many of you have probably already noticed either from playing in other Nationals or reading about them, the DCI introduced a new spin to the format this year. For years there has been a debate about which of Day 1 or Day 2 should be the Limited day and which should be the Standard constructed day. Different parts of the world have done things in different ways, and the fact that some countries spread their Nationals over 2 days while others use 3 (and a few use just 1) complicates things even farther. 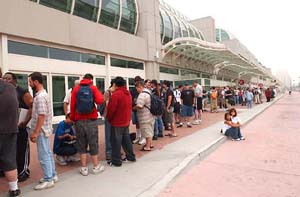 When preparing for this years Road to Worlds, the DCI took a long hard look at this issue and came up with a potential new solution. The tricky issue is this: it's bad to have the final three rounds of the Swiss be draft because of the way pairings often work out in the late rounds. Players with different records often get paired up against each other and those matches are a really awkward way to decide who makes the Top 8. Even the draft itself can be awkward when one guy has already clinched the Top 8 but the guy he's feeding is still playing for it. All things considered, it's just better to end with constructed rounds than draft rounds.

However, if national tournaments started out with draft, there is the unfortunate possibility that skilled players could be dragged down by the inexperienced drafters around them. Nationals is distinct in part because of the large influx of Regionals winners and the DCI spent a lot of time arguing about what impact they have on the skill-testingness of our formats. In addition to the fact that one "random" drafter can throw off the drafts of all the players around them, it's also less than ideal if competitors spent fully half of the draft rounds in the tournament playing against whoever happened to wind up at their first table. The conclusion was that nationals is better off starting out with a constructed format.

Faced with logic that said draft shouldn't be played at the beginning of day 1 and draft shouldn't be played at the end of day 2, the DCI started considering split days. It wouldn't be very attractive from an aesthetic point of view, but if the tournament was three rounds of constructed followed by six rounds of draft (aka two draft pods) followed by the other three rounds of constructed, then the tournament itself would be maximally skill-testing.

Skill-testing and tournament integrity won out over aesthetics in the end and the new split-days format will be used at this year's US Nationals. As always, the DCI will be studying the results of this change and gathering feedback in an effort to continue to improve Magic's tournament system in any way possible.