fter serving as Head Judge of Pro Tour-San Diego, Toby Elliott was back in stripes this weekend for U.S. Nationals. While the red stripes were worn by Scott Marshall this time, Toby, as always, played a vital role in making the event go very smoothly. After Nationals was over, Toby learned he was getting promoted, moving up to the rarefied air of Level 5. This puts him in quite exclusive company, as there are only five other L5s in the world (Sheldon Menery, Mike Guptil, Collin Jackson, Jaap Brouwer, and Gis Hoogendjik). 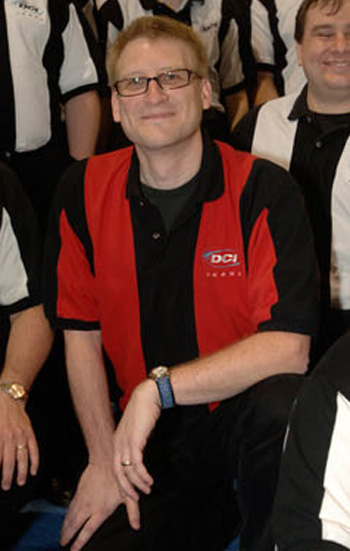 After wearing the red stripes in San Diego, it was time for Elliott's promotion to Level 5.

I asked Mike Guptil about Toby's promotion, and he immediately said it was "well-deserved." Guptil called Toby "one of the most recognizable faces in the DCI Judge program, both nationally and internationally." When asked about the addition of a sixth Level 5 to the program, Guptil quipped that "we're almost Ringwraiths again-there used to be nine of us at one point." I'm sure Mike would have had more to say about his colleague, but he was in a hurry to leave for the drive home.

Fellow Level 5 Sheldon Menery agreed that Toby's promotion was well-deserved "beyond the shadow of a doubt." When asked what an additional Level 5 adds to the Judge program, Menery said it adds "an additional measure of top-level philosophy, consistency, and inspirational leadership." While head judging in San Diego, Toby implemented an aggressive seminar schedule for judges, which Sheldon said would "expand the levels of training we can give to the judges," and that it filled a good need in the program. Judge seminars are done on Sundays at events like PTs and Nationals, when the need for a zebra-shirted presence is reduced. Seminars are presented on a wide range of topics, and are very useful in helping judges learn many new things to take back to their own regions.

DCI Judge Manager Andy Heckt was ebullient in his praise of Toby.

"He did a fantastic job at Pro Tour-San Diego," Heckt said. "Not only did he run an efficient PT, but he did what we really seek someone leading the program to do."

In addition to leading his staff on the floor, Toby made sure to include things like a 2HG judge draft after hours, allowing the staff to have fun with their fellow judges. Andy also mentioned the "aggressive seminar schedule" that Toby implemented-and even stuck with when one of the judges slated to lead seminars was unable to make it at the last minute (he was replaced by someone else). The seminars were "very well-received," and the volume of them made it seem "like a convention."

In addition to his stellar work on event floors the world over, Toby was also cited for his equally stellar work behind the scenes. The DCI Penalty Guide recently underwent a major revision, being rethought and overhauled from the ground up. Toby Elliott was instrumental in writing the new Penalty Guide, and Heckt called his job on it "amazing." Not only did Toby compile copious notes on the Penalty Guide and arrange them into the final version, he helped explain them further to the world with two articles for the DCI Judge website (Game Play Errors and Lies My Old PG Told Me) and a podcast on Mox Radio. All of this meant that Toby had "stepped up beyond what we consider Level 4," Heckt said. He described Toby as a "global leader," not just a regional one.

For all his hard and excellent work, Toby Elliot has been promoted to Level 5 Judge. Congratulations, Toby, on this very well-deserved achievement!