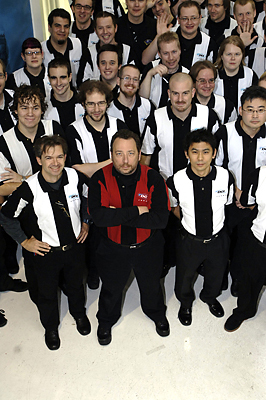 Head Judge Sheldon Menery: 'If you come to the Pro Tour to cheat, I'm going to catch you.'

The Pro Tour brings out the game's biggest names and stars to compete for the fame and glory of becoming a champion. Unfortunately, despite all the best the Pro Tour brings out in players, be it camaraderie, deck building, or helping each other out, it can sometimes bring out the worst in players as well. This weekend that took shape in the form of a player disqualification for cheating.

Early in the Friday competition, a spectator approached head judge Sheldon Menery and pointed out a player he suspected had been drawing cards from his lap during a match. Judges were dispatched to monitor the player, Gaetan Lefebvre of France, and two rounds later he was witnessed dropping his hands to his lap after the match. A judge quickly swooped in and confiscated the player's deck. Menery was quickly called in to investigate.

"I inspected Gaetan's deck and quickly discovered he had 66 cards in his deck, including six facing the opposite direction of the rest of the cards he was playing." That led to a further and more in-depth investigation. After amassing additional evidence, Lefebvre was confronted. He quickly confessed to the fact he had been keeping up to six cards in his lap during matches in order to swap his hand for any number of the cards should he feel the need to do so. As a result, he was awarded the harshest penalty possible at an event: disqualification without prize. A DCI investigation will follow to determine the long-term consequences.

While the Pro Tour is most famous for the great stories it generates, occasionally stories like this one float to the surface. Hopefully they will serve as a reminder and deterrent to other players.

To that end, Sheldon had this to add: "If you come to the Pro Tour to cheat, I'm going to catch you."