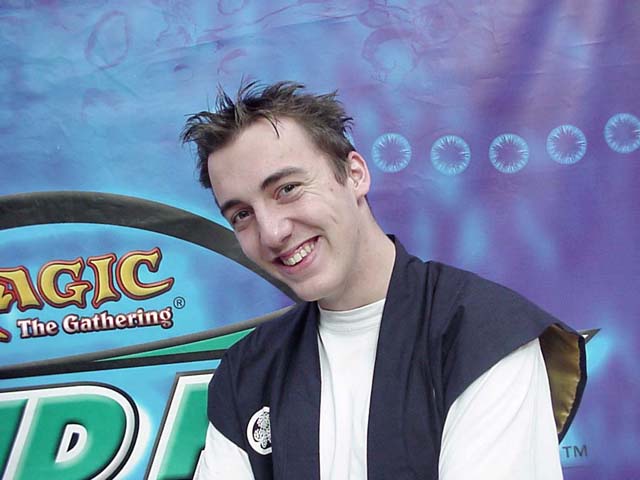 There have been plenty of Grand Prix events using the Invasion block limited format, and the Ruel brothers have done pretty well in the format. Olivier, the younger Ruel at 19, finished tenth in Grand Prix Prague, ninth in Grand Prix Cologne and second in Grand Prix Valencia, a pretty impressive record. "It's not the best result of the family, but it's not that bad," Olivier laughs.

In Gothenburg, at least Olivier will finish above his older brother as Antoine chose to stay in France and visit his girlfriend instead of going to yet another Magic tournament. The schedule has been heavy lately, with Grand Prix Prague and Pro Tour Tokyo and now Grand Prix Gothenburg all in a row. Without a girlfriend, Olivier was free to go to Gothenburg, and now he is looking to get yet another great finish. Still, he admits to having a problem with the format.

"A lot of players prefer playing red and black, especially in draft. I personally like blue a lot, and I sued to draft blue and white just to get all the good cards coming - everybody just opened the packs and took a removal first pick. But the fact that I've been playing blue and white has given me some problems when I play the other colours. I don't know what to take, a good creature or an average removal spell. I realised that when I prepared for the Masters, the only colours I knew how to play were red, white and blue," he reveals.

His strategy for the Sealed deck though was simply to try and play all the best cards of his card pool in his deck. "I think that there is almost not a single bad card in this expansion, so the very good cards make a difference," he says.

These are the cards Olivier opened:

"When the judge put the deck on the table, the first card I saw was Flametongue Kavu, and I tried to shake the box a little to see if I could see any more cards. I saw two more, Thunderscape Master and Exotic Curse - and so I thought 'this is a good deck,'" Olivier says. The initial thought was to go for red and black, but when he started building the deck he noticed some problems - the red and the black weren't deep enough to go for them as main colours.

He had several tappers though, and both the white and the blue were good colours. "The only thing that was I was sure of was that I wasn't playing green," he says.

This is the deck that Olivier ended up playing:

"I needed some strong cards like Flametongue Kavu, Magma Burst and Exotic Curse to really make a difference," Olivier says. He went for his strategy of playing all the best cards, and ended up with a four-colour deck. The base of his deck is blue and white, with a splash for red and black mainly for removal. "So once more I play the same colours, but I think this is a good choice for once," he smiles, then praising his blue and white gold card: "I like Ordered Migration so much. If you play it for four, you win all the time if your draw is decent and if your opponent doesn't have Simoon. But I have a Lashknife Barrier, so I won't have any problems," he grins.

Olivier's main problem was deciding whether to play four colours or not. He chose to go with one black card only, Exotic Curse. In addition, the black mana enables him to use the black kicker of his Stormscape Battlemage or even the Stormscape Apprentice if necessary. Playing four colours can give a player mana problems though, and Olivier is aware of that risk. "I play 18 lands, one of them is a Terminal Moraine. Then I have a Worldly Counsel and a Chromatic Sphere," he explains. He even has a Sea Snidd that can help him in a clinch.

The young Frenchman was all in all quite happy with his deck. "I may go 5-2, but I think it should be 6-1. You need to have an excellent deck to beat this. I just hope I won't get any problems with the curve, but if I draw the cards I need, I don't think I'll have a lot of problems," Olivier says.