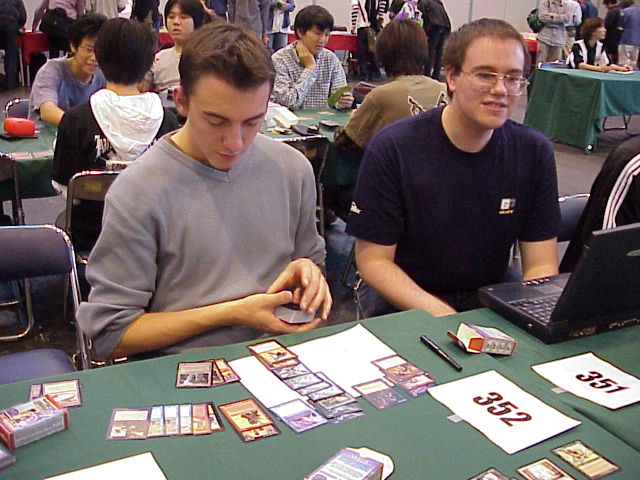 "My brother doesn't even know I'm here!" After a last minute exchange of communications crossing three continents, French superstar Olivier Ruel made it just in time to attend 705-strong GP: Shizuoka. Ruel needs just one Pro Point to qualify for the New Orleans Masters, and with airfare to Montreal and Shizuoka similarly priced, he decided to return to Japan. Not only will it give him the chance to do the sightseeing he missed while attending Pro Tour - Tokyo, he also feels that he stands a better chance of making Top 32 away from the North American pros. Coming off a tied-for-last-place finish at the Invitational last weekend, Ruel really wants to make the Masters.

Ruel lacked high spirits after opening his cards. The heavily favored green cards decided to give Ruel a miss, with only Springing Tiger and Werebear as bombs. White wasn't much better, offering a Mystic Crusader, Shelter, and a handful of Aven.

"These creatures are all quality, but all the spells are terrible!" Ruel used his blue, red, and black pool and pieced together a solid ground force with 3 Dreamwinders and Minotaur Explorer. While the mass of fat would hopefully bog down the opponent's offensive, his large flying armada of two Childhood Horrors, Aven Fisher, Aven Windreader, Treetop Sentinel, and Dusk Imp would drive the damage home. Ruel groaned at using two Legendary bombs, Kamahl, Pit Fighter, and Cabal Patriarch in the same deck.

Chainflinger, Ghastly Demise, and Thermal Blast offered a modest amount of removal, but not nearly enough for the French superstar to be happy with. Ruel's deck lacked a strong emphasis on threshold; only the Childhood Horrors and Chainflinger would benefit from hitting seven cards. Ruel made a sound call, as only Millikin could aid a rush to threshold. Representing the flashback contingent were Morgue Theft and the oh so filling Dematerialize.

"If I don't draw two blue, three black, and two red mana every game, I'm through." Two Bog Wreckages, a Ravaged Highlands, and two Words of Wisdom would help assuage his pain, but Olivier feared that his deck's Invasion-like mana build wouldn't really fit his deck. The Odyssey sac-lands have been recognized as useful for splashing off-color bombs with one colored mana in the casting cost, but Ruel's legends required RR and BBB, making his mana base quite shaky. Nonetheless, with his solid play skills and 3 byes, Ruel would have a strong shot at hustling his way into Day 2.