One Minute With Justin West

After a disappointing showing at Worlds, West is looking to show the rest of the tournament exactly why he was crowned the champion of Australian Magic. Hailing from Melbourne, the only travel West requires is the time it takes him to get from his home in Geelong to the venue in the center of the city. 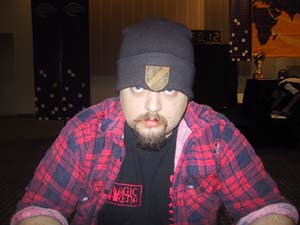 Coming into the event West has had several opportunities to practice both the draft and sealed portions of today's event. To be honest several is really an understatement, with Magic thriving in Melbourne he has had the opportunity to play about 3 drafts a week with his teammates from the Death Dealers along with multiple GP trials. Despite his busy schedule West has also managed to fit in as many Magic Online drafts as he could, allowing him the opportunity to play test and gather ideas from people all around the world.

West confesses that he is almost at the mercy of the player to his right if he can make it to the rochester part of the tournament, however he did admit that he would like to open a strong signal card in his first booster. A first pick of Starstorm would show everyone else on the table that he is willing to fight for the color of his first pick and he's hoping that it will scare off the players on either side of him. In the sealed portion he's hoping that he will be able to play a strong r/b deck full of removal so he won't need to worry about any creature bombs that his opponent may have in their deck.