Online Extended is an interesting format - one without a home "in real life," as paper-based Extended includes the Tempest, Urza, and Masques blocks which aren't part of the Magic Online environment. But it looks to be an important and well-played format online, where people will be reluctant to shelve the Invasion-block goodies they own once Onslaught forces those three popular sets out of Standard.

So what did the pros come up with when they added Onslaught to the current Standard card pool of Seventh Edition and Invasion through Judgment? And, more importantly, what worked?

The following four decks look to be the big boys of the format: 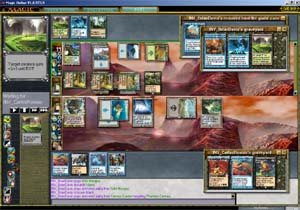 Blue/green madness was a powerhouse in both Standard and block constructed recently, and it makes the transition to Online Extended quite well, Onslaught be damned. In fact, the only Onslaught card worth adding to the deck at all is Naturalize in the sideboard, and not even all four players could agree on that.

There were to slightly different version of this deck played, but the difference proved significant. Davis and Shvartsman played Counterspell and Deep Analysism, and went a combined 5-1, whereas Price and Pikula eschewed those cards in favor or Repulse, and went a combined 1-5. The lesson is: don't play Repulse in this deck, although I honestly don't think anyone does other than these two jokers.

The key to the deck's success is the overpowered Wonder, which can combine with explosive madness-fueled draws to end the game in a hurry. Sideboards full of Centaurs - both the Spellbane and Phantom varieties - allow the creature base to be tweaked against specific strategies without losing the ability to attack hard.

All in all, this is probably the deck to beat in just about every format ever invented.

The addition of Onslaught fetch lands does two things to the preexisting blue-green threshold decks: allow splashing of a third color, and making threshold even quicker and easier to attain, as if that was possible.

Nitter and Wise went with the eight-fetch-land white splash, which gave them access to Mystic Enforcer in the main deck, plus Aura Mutation and Worship in the board. The rest of the deck is basically madness and threshold cards and madness and threshold enablers, which add up to a lot of large, cheap creature in a hurry. The other bit of tech Nitter and Wise had was the old-school Unsummon, the cheapest bounce spell in town. Unsummon is finally getting some playing time after spending close to ten years on the bench.

Dave Humpherys took a different route, using four fetch lands for his red splash. The only cards of that color in his deck were a trio of Flametongue Kavu. For whatever reason, Humpherys deck didn't work out right, as he earned only a single match win. Don't let the record fool you, however; Flametongue is one of the most powerful spells available Online, and this deck will probably be a prominent player as the format shakes out. 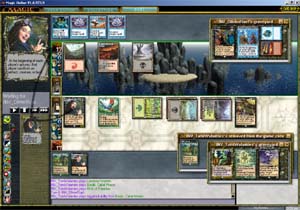 Discard, Pernicious Deed, and Braids can clean up any mess in a hurry. Here Walamies has Braids out and Ruel can't cast a single spell in his hand. (click to open full-size in a new window)Black/Green Aggro-Control
Jens Thoren 3-0
Tomi Walamies 2-1

Team Punisher decided the real goods of this format were not found in Odyssey but Apocalypse; their black/green special contained Pernicious Deed, Spiritmonger, and Phyrexian Arena.

Thoren added some Odyssey green cards in order to generate card advantage, including Call of the Herd, Beast Attack, and Squirrel Nest. All of his extra creatures allow him to run Braids as his primary means of disruption.

Walamies' deck is slightly different. His approach is based on heavy discard (Duress, Cabal Therapy, and Mesmeric Fiend) backed up by Haunting Echoes to strip his opponents of all resources. In addition to the 'Monger, the bulk of his offense is provided by Phantom Centaur and four copies of Living Wish, which give him access to lots of silver bullet creatures in his sideboard, including Faceless Butcher, Ravenous Baloth, and Laquatus's Champion.

Between Smother, Pernicious Deed, and sideboarded Slay, this deck can kill just about all the threats blue/green can throw at it, and it also hits just as hard with a variety of beefy monsters.

The South American contingent decided to stick with the old tried-and-true Cunning 'Tog deck that got them both invited to this event in the first place. The big additions to the deck are Smother, which helps out immensely against Wild Mongrel, and a Read the Runes to wish for in the sideboard, which acts like a super Howl from Beyond when Psychatog is on the table.

Ostrovich also tried Future Sight in his deck, although at five mana it proved a little slow.

'Tog put up good numbers here, and will a big player in the developing Online Extended metagame.

The following three decks didn't quite cut the mustard:

Kibler's deck seems like it should be good: aggressive guys, cheap burn, and some Terminates to clear the path. In theory that is good, but in practice there are probably just a few too many hard-to-kill creatures in the format that get in his way.

Both Phantom Centaur and Mystic Enforcer are immune to all of Kibler's removal, and he ran into several such monsters in the three rounds he played. Spiritmonger can also be problematic. If the metagame shifts away from huge pro-black beaters, red/green aggro will be good. Until then, it isn't. 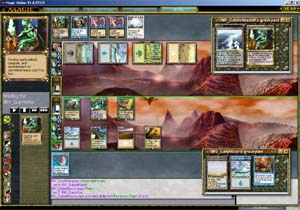 If the four-color control decks draw the right mana, their spells are powerful enough to stop anything. Here, a four-point Deed from Nassif threatens to wipe out all of Wise's creatures. (click to open full-size in a new window)Four-Color Control
Gabriel Nassif 1-2
Itaru Ishida 1-2

The vast array of dual lands available in the format led these two competitors astray. Both built three color control decks and decided to splash green for Pernicious Deed and some way to win the game (Spiritmonger for Nassif and Grizzly Fate for Ishida).

The cards in both decks are like a Who's Who of raw power, but the mana bases are sheer insanity. Ishida's deck has nine kinds of land in it, and Nassif's has fourteen!

Each managed to win a match when they drew the right lands, but couldn't do that consistently enough to win any more.

Luckily, Battle only loses to decks which are more consistent than it.

As you can see, that would be all of them. Bigger is certainly not better.

Finkel and Ruel learned a harsh lesson today, as they sat through round after round of Wild Mongrel and Arrogant Wurm beatings as they stared at their filter lands and Diamonds. Things only get worse after sideboarding, as most opponents had enchantment destruction at their fingertips.

No problem, once one Battle is destroyed, you should draw another in about 58 turns.