Brian David-Marshall is a New York–based game designer who has been involved with Magic since 1994, when he started organizing tournaments and ran a Manhattan game store. Since then, he has been a judge, a player, and one of the longest-tenured columnists on DailyMTG.com, as he enters his second decade writing for the site. He is also the Pro Tour Historian and one of the commentators for the Pro Tour.
Share Article
Share Tweet Share
the original plan was for me to play in the Grand Prix and do coverage of the event from a player's perspective. If I failed to make day two, I would then play in the PTQ and continue my reporting from there.

After a dismal performance with a deck that was designed less than 24 hours before the tournament started, I realized that there was no way I could play another round with yesterday's deck. The problem with that realization is that I loaned my good deck (read: Affinity) to Jordan Berkowitz when he heard I was foregoing the most powerful deck in the format. Jordan made it through to today's competition, and it seemed like bad form to ask for the deck back so I could play in the PTQ.

Instead I will be doing a little coverage of the traditional variety, with a draft or two squeezed in there as well. Still, I wanted those of you not fortunate enough to be here an idea of the various goings-ons at a Grand Prix, so I will give you the run down on what the players who failed to Day Two could be doing besides sleeping in.

The event that is taking up the most seats is the PTQ. It is the same format as the Grand Prix, and of the 251 players participating, only two were not playing in the main event yesterday. The tournament falls just shy of the cutoff for nine rounds of play but even with eight rounds the PTQ hopeful will still be on site long after the Day Two competitors from the Grand Prix have driven off in pursuit of food that is not served in a cafeteria line.

The most notable names in the PTQ are two of the game's greatest writers -- Mike Flores and Eric "EDT" Taylor. Both of them were with Vial Affinity and neither one of them felt they had other viable options.

"I randomly toyed with the idea of playing red-green because I lost to it in the final round yesterday to not make day two" Flores said. "I mean…let's be honest here. There is no reason to not play Affinity -- it's the best deck."

Of course that meant Mike would take a first-round loss to Rude Awakening. He has won the two subsequent rounds -- one despite Alana Burman having the kill on table -- but he is facing a long road to hoe and the prospect of lousy tiebreakers. Even if he wins out the remainder of the rounds he will not be able to draw his way into the top 8 -- he will have to win that last round as well. Because it is so close to the cut for an additional round there will be a glut of players with records that would normally allow them to draw into the elimination rounds.

There is also an unsanctioned Vintage (Type 1) tournament going on for a Mox. Thirty-five players signed up for the tournament which allows the use of up to five clearly marked proxies for some of the harder to acquire tools of the Type 1 trade.

Erik Wenokor has been coming to Gray Matter events for as long as they have been run going all the way back to the very first one in November, 1994. For him it an opportunity to break out his beloved jewelry and play the same deck he has been using for years and years. 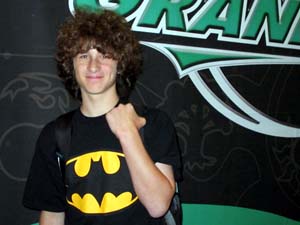 For others it is a chance to tune up for the Type 1 Championships that are being held next week at GenCon. Young Aaron Rubenstein is using the event as a tune-up and hopefully filling in the last couple of cards he needs to play in the championships. He was playing GroAtog and was still proxying his Sapphire and Ruby. He hoped to win one of those this weekend.

Aaron is part of an up-to-recently-invisible sub culture of the Magic community who participate in regular Vintage tournaments that fly beneath the radar because they are unsanctioned due to the allowance of up to five proxies. The recent Power 9 tournament that was held by Star City Games has brought a lot of additional exposure to the format and more and more tournament organizers are taking notice.

The additional exposure has also led to increased dialogue about deck archetypes and format metagaming. Aaron admitted that he paid attention to the various websites when building his deck. "It is pretty much my own build. I have been taking things here and there that I have seen online. I play every week at Mark's Comics on Long Island. There are about thirty players there but I am looking to try and do well at the Championships."

Good luck, Aaron. Hopefully we will be hearing more about you next week.

With the main events out of the way, players looking for something to do can turn to side events. There are countless eight-man sanctioned block constructed and MD5 draft tournaments going off as they fill up. The block tournaments are $15 to enter and the winner gets a box of Fifth Dawn. Olivier Ruel's name on the top of the sign up sheet was driving prospective players into the side drafts. He had already split in the finals of one such event gloating about his bounty.

"Eighteen packs for $15 and two wins. It is pretty good."

Ruel has always been adept at exploiting side events for both rating points and prizes. At Pro Tour Kobe he signed up for a nine man side event that offered a complete set of Japanese Urza's Saga to the winner. Realizing that the next block event was not going to happen with his name on the sheet, he turned his attention to the team sealed event which was also for box of product.

The team that faces him in the first round will be in for a nasty surprise. His two teammates were Jelger Wiegersma and Frank Karsten.