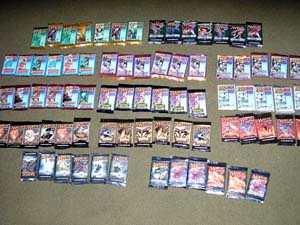 first format of this year's Magic Invitational is a variant on sealed deck. Each player will get 75 cards plus as much basic land as he needs with which to construct a 40-card deck. The twist is which cards each player has access to.

In the lobby of the hotel last night, Mark Rosewater laid out 80 booster packs in neat rows--there were six from every expert-level expansion available on Magic Online (Invasion through Darksteel), plus seven each of Seventh Edition and Eighth Edition. The players then Rochester drafted the packs one by one; the five packs each ended up with would be given to them Online today to build a sealed deck with.

The talk at dinner had been about which sets would be disappearing early, and most signs pointed towards Apocalypse as the coveted expansion, as it has powerful common removal like Jilt and Consume Strength. Many players were saying they could imagine the six Apocalypse packs being chosen first through sixth, but that ended up being nothing but posturing talk.

The draft order was determined randomly, and Osyp Lebedowicz led off the draft by selecting... Planeshift! With Magma Burst and Rushing River at common, plus amazing uncommons like the Charms, Battlemages, and Flametongue Kavu, Planeshift may in fact be the best set available for sealed deck.

Below are the packs in the order the players chose them. Read down the first column, and then up the second to see the actual orders of the picks (so Dirk Baberowski, with the 16th and 17th selections, took two packs of Torment). The draft order snakes up and down the columns, with Baberowski given the last pack at the end.

Power was clearly not the order of the day for most players--consistency was. Twelve of the sixteen players chose sets from within a specific block for the first three rounds. The Japanese players gravitated to the Mirrodin block. Zvi Mowshowitz went with the white/green power of Judgment. Mattias Jorstedt went for Scourge, opting for a small set to insure getting more of the good commons. The way blocks are developed in Magic, having cards that work together is far more important than just getting a bunch of potentially powerful cards.

Look at Jens Thorens draft, for instance. He started off with two packs of Torment, looking to go black from the get-go. When the Torment dried up, he moved on to other sets that are notoriously kind to black, like Scourge (Twisted Abomination, Zombie Cutthroat) and Darksteel (Essence Drain, Chittering Rats). He finished off with Legions, a fine last pack as he is bound to get a few playables out of 15 creatures.

Legions and Eighth Edition were the big losers. The lure of Timberwatch Elves and Dark Banishings was not enough to give these two sets some legs, and no player ended up with more than one pack of either.

I expect Thoren and Mowshowitz to do well due to their homogenous choices. If Apocalypse is as good as rumored, Jordan Berkowicz--with three of the wacky gold set--is another odds-on favorite.