In the past year, Japan has moved beyond being simply the dominant Magic nation in Asia to capture attention on the world stage. With Panzer Hunter essentially establishing a reserved seat at the Team Masters Finals, and Katsuhiro Mori smashing all opposition to take the Rookie of the Year title (and incidentally become the highest place Japanese finisher at Worlds to date), the Japanese pro community stormed onto the scene, finally capturing the attention many knew they long deserved. Still, not all the top Japanese players are as recognizable as, say, Finkel or Budde. To help people following this weekend's coverage, the Sideboard has prepared a roster of the top contenders for the title of 2002 National Champion. 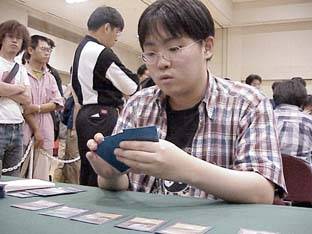 The brains behind Panzer Hunter, Ishida is easily the Japanese player with the highest profile--and the highest lifetime earnings. He's had a banner year, starting with Tokyo Team Masters. He went on to win GP Kobe (the largest event in the world with 1,350 players) in August, The Finals (a Japan-only Standard/Extended event with a million yen purse) in December, then repeat his Team Masters performance at Osaka. A Finalist in '99 Nationals, Ishida has been close to glory several times. Given the wave he's been riding the past year, along with his demonstrated mastery of both Constructed and Limited formats, he's the favorite to take home the trophy this year. 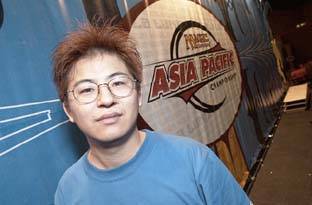 Dubbed "The Last Emperor of Asia" after his victory at what became the last-ever APAC Championship in 2001, Okamoto showed that he wasn't just a big fish in a small pond by placing 10th at Worlds the same year. He followed that up with a 9th place finish at PT San Diego. Although his strength is in Limited, he's no slouch at Constructed, either. Although he relies on his teammates to build his decks, once he's given the deck he can ride it to the top. It wouldn't surprise anyone to see him in the Top 8--unless the untested draft environment throws him for a loop. 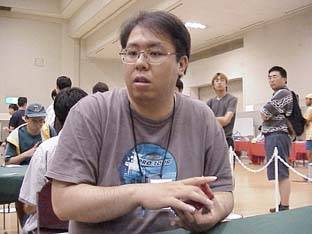 Standing 185cm tall, 2-time GP winner and former national team member Ken'ichi Fujita is a figurative and literal giant of the Japanese Magic world. Noted for his limited skills (both his GP wins were draft format), Fujita has been a presence both in Japan and on the Pro Tour for several years. However, he hasn't had a win for a few seasons, with his strongest recent finish coming at PT LA 01 (Top 32). One of the last old guard players still around, there are a lot of people who'd like to see him win, but does he he still have what it takes? 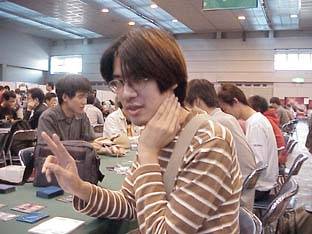 A member of the 2001 national team, and one of Japan's rising stars, Morita's speciality is Limited, as evidenced by the fact that he made Top 8 in all of the Limited Grand Prix he's played in. Morita is fresh off his Nagoya victory which not only gave him his first, long-awaited title but also earned him a Masters' invitation. Although he admits he's not good at playing the metagame, his Limited skills are strong enough that he can probably draft his way out of any hole he digs himself into during the Standard portion. 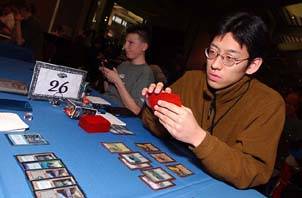 Morita's teammate Kuroda was a member of the 1999 national team, and has long been recognized in Japan for his deckbuilding skills and ability to read the metagame. However, he proved he's not a one-trick pony with his GP Nagoya win earlier this month, right on the heels of another Limited GP Top 8. Kuroda lost to Higashino in the finals of Nationals three years ago due to a misplay on his part, and he's regretted it ever since. Last year, he lost in the Top 8. Will he be able to overcome the ghosts of Nationals past? 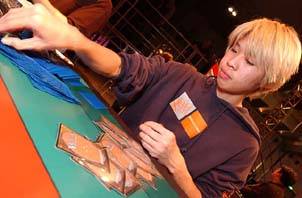 By now, Mori is a familiar face to anyone who's been on the Pro Tour--if you can see him, that his. Mori's amazingly fast pace of play, coupled with his brightly dyed hair, have earned him the nickname of "Lightning". Fresh out of high school, Mori was the first Japanese player to claim a Pro title when he pushed his way past Lawrence Creech and Ken Ho at 2001 Worlds to become Rookie of the Year. Not one to sit on his laurels, Mori has followed that with consistent Top 8 performances, and with Kuroda and Morita just got himself a Masters' invite. Ask anyone who's willing to wager--the odds are on Mori making the Finals, and if he does, he's liable to take it all. 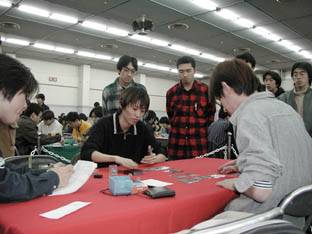 Best known for winning unprecenteded back-to-back Continental Championships, Mori surprised the Japanese community last year when, after attending Worlds as the team alternate, he announced he was leaving Magic and going to work full-time. After disappearing for nearly a year, Mori again surprised everyone by joining Ishida and Reiji Andou at Grand Prix Nagoya. Observers noted that taking some time off hadn't dulled Mori's analytical skills and playing. However, his lack of first-hand knowledge of the metagame may hurt him in the Standard portion. 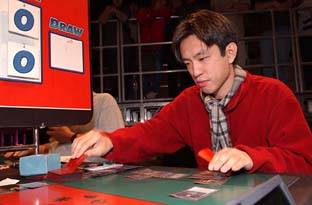 The first Japanese player to make Top 8 at a Pro Tour, Fujita has been struggling since then. To be sure, he's had a GP Top 8, but he's looking for something to prove that his performance at Tokyo wasn't just a fluke. A National title would erase any doubt in his or anyone else's mind that he just got lucky. Fujita's strength is in Constructed (both Tokyo and Kyoto--the GP he won to qualify for Tokyo--were Constructed), and so might have difficulty adapting to the new draft format. He'll want to post a good record on Friday, thereby setting himself up to coast through Saturday's draft. 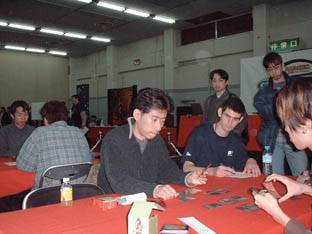 Winning Nationals twice ('96, '98) earned Tsukamoto the nickname "Champ". After a string of tournament successes, he took his prize earnings and opened the card shop "Off Beat" in Tokyo. Busy running his store, Tsukamoto has been mostly absent from the tournament scene for the last few years, and when he did play, it was usually with lackluster results. In fact, his rating had fallen to the point where he wasn't even qualified for this year's Nationals. However, a friend gave him a deck and encouraged him to play "for old times' sake." Tsukamoto signed up for the last grinder of the day, and 5 rounds later found himself filling out a Nationals registration form. Gorou Matsuo came out of a 2-year hibernation to win last year's Nationals, going 6-0 in the draft in spite of never having drafted Invasion. Will Tsukamoto follow in his former teammate's steps and show that pros can leave the game, but never lose their game?