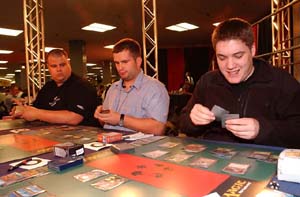 The debate as to whether or not Kai Budde is the best player in the world took another turn today as the German Juggernaut, who last year won an unprecedented two Pro Tours in one season, advanced with his team, Phoenix Foundation, to his first Team PT Day 3. Budde, who just won his fourth single Grand Prix in London, came to New York with two old friends, Dirk Baberowski and Marco Blume in the hopes of taking home a title in the only format still to evade him. Tomorrow will tell if Budde can catch his personal Questing Beast.

Budde's most remarkable trait is his versatility, as proven in looking at his victories. He's won a constructed Pro Tour, a Limited Pro Tour and a World Championship, which combines both formats. He's won two Limited Grand Prix and two Constructed ones, but the teams title has always eluded him. On the line tomorrow for Kai is one of the great streaks of all time, his final day record, with his three Pro Tour Top 8's each resulting in 3-0 records. There's a lot on the line for the Hamburg, Germany student.

Many questioned Kai's decision to pick friends over Pro Tour regulars as team mates, as he could virtually take his choice of comrades in arms, but the potency of Dirk Baberowski's game quieted most critics before they opened their mouths. Baberowski, who presently owns a travel agency in Cologne, is a champion in his own right, being only the second player in history to win his first Pro Tour at Chicago in 1998. Like Kai, Dirk's versatility is an asset as proven by a Top 8 showing at Chicago 1999 as well as Top 8 finishes at a number of Grand Prix over the years.

Joining the two best German players in PT history is the bodyguard, Marco Blume. A veritable monster of a man, Blume has long been a friend to Baberowski as well as a calming influence on the once young Budde. Marco, a computer programmer, hasn't seen Pro Tour action in some time, but he's definitely had his moments, with his winning of the 1999 German National Championships allowing him to lead his country into battle, eventually landing them in second only to a very strong American squad. Fully understanding how good his two team mates are, the big man has allowed them to do the brunt of the drafting, playing what's given to him well enough to get his team into Sunday's play.

With Masters, huge numbers of Pro Tour points, prestige, Kai's third day streak and one very big check on the line, the Germans have to be considered one of the favorites going into Sunday. With skill, attitude and experience on their side, there don't seem to be many chinks in their armor. Regardless of the outcome, you have to give these men their credit, especially the reigning player of the year: Jon Finkel has to be the best player of all time, but Kai is putting up one hell of an argument for the present.