By Bill Stark and Craig Gibson

Missing the festivities this weekend at Pro Tour-Amsterdam? No worries! Pro Tour photographer Craig Gibson and Bill Stark, your intrepid floor reporter, were on the case to bring you some of the sights you missed!

First, a host of things you find only in the Netherlands (well ... or Europe in general): 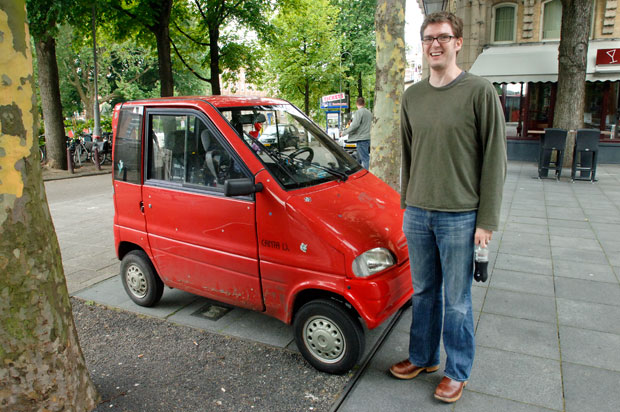 Tiny, fuel efficient vehicles half the size of a human being (Magicthegathering.com editor Kelly Digges shown for scale). 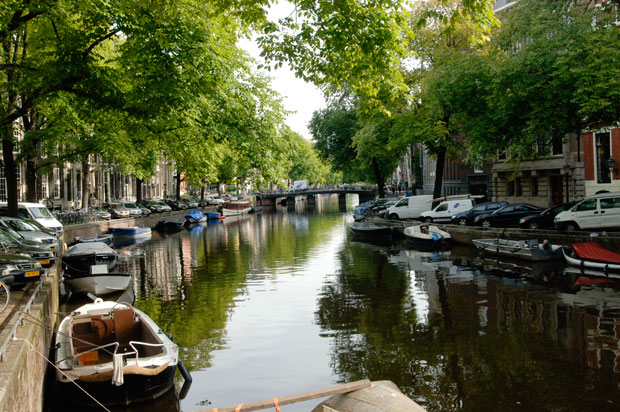 Waterways used for actual navigation around town here in Amsterdam. 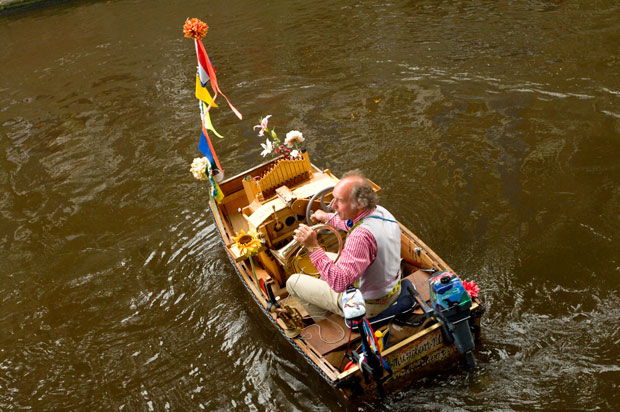 And of course the preferred method of transportation through said canals (though your mileage may vary). 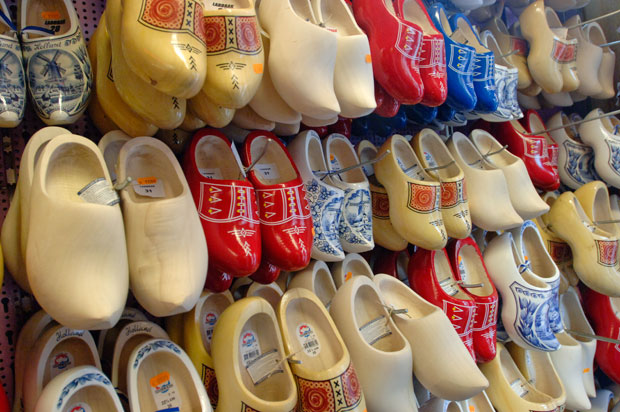 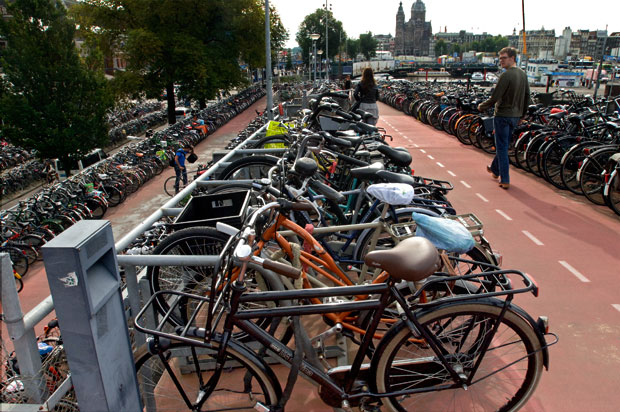 The vehicle of choice in Amsterdam. Bikes are everywhere!

But of course, let's not forget there's a Pro Tour happening this weekend! 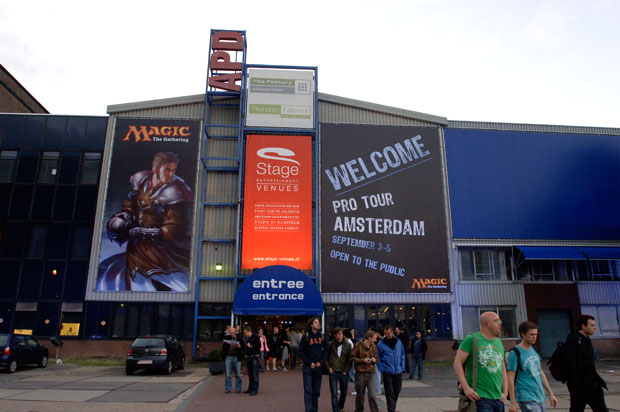 The welcoming outer façade of the convention center here in Amsterdam, calling forth Magic players from all over the world. The Pro Tour is the largest non-teams Pro Tour ever held! 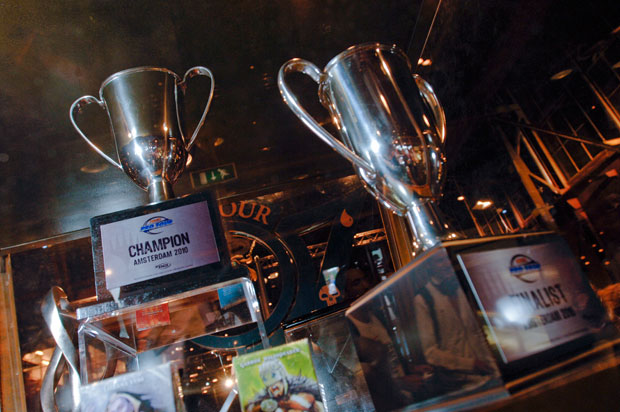 The big prize. Okay, sure, there are lots of cash prizes up for grabs, but at the end of the day? The trophies are what separate the champions from the chaff. 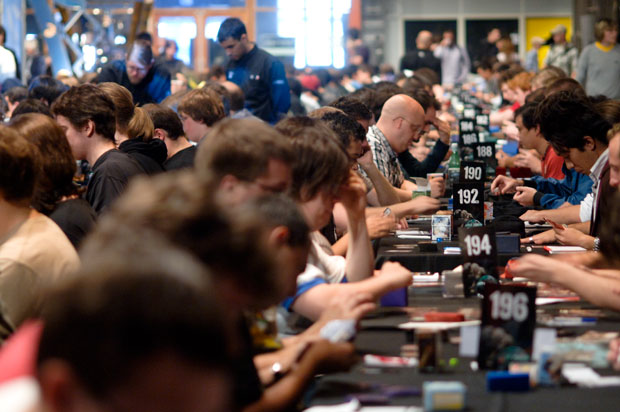 Players sit down to battle for their first round of competition. With over 450 players competing, Pro Tour-Amsterdam will be a challenging event to survive. 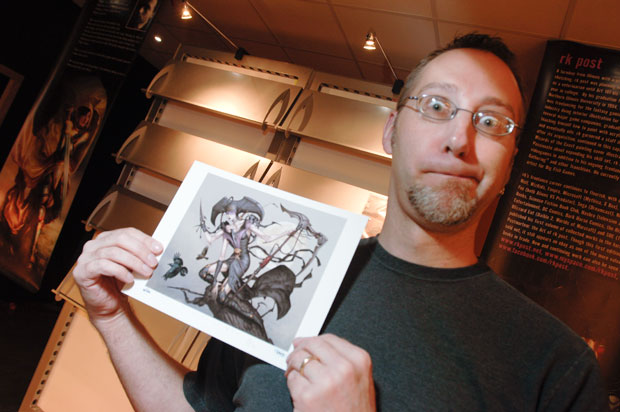 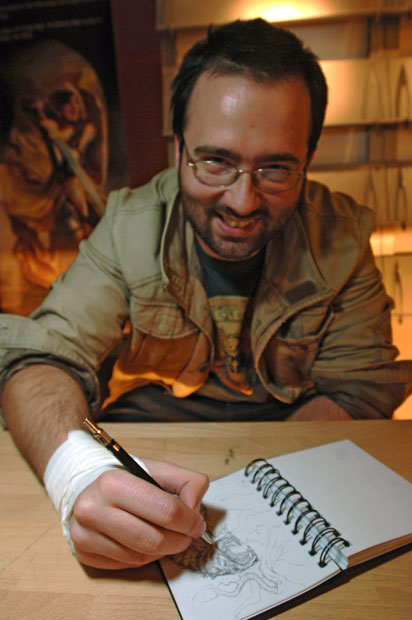 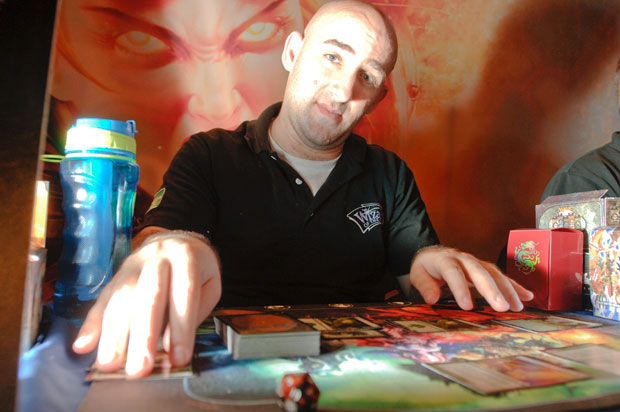 You also have the Champion Challenge. There you can square off against blokes like Wizards of the Coast R&D member Dave Guskin. Play for free with whatever deck you like, and have a blast asking questions about what it's like making Magic for a living, traveling the world, and getting to play games all the time! 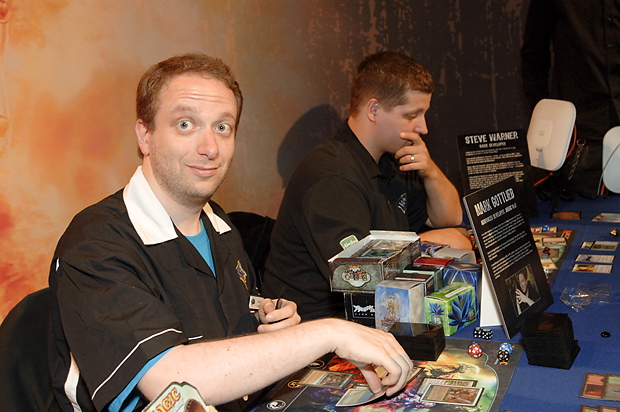 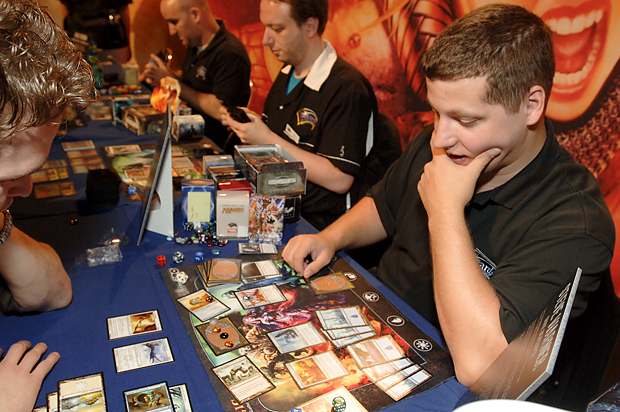 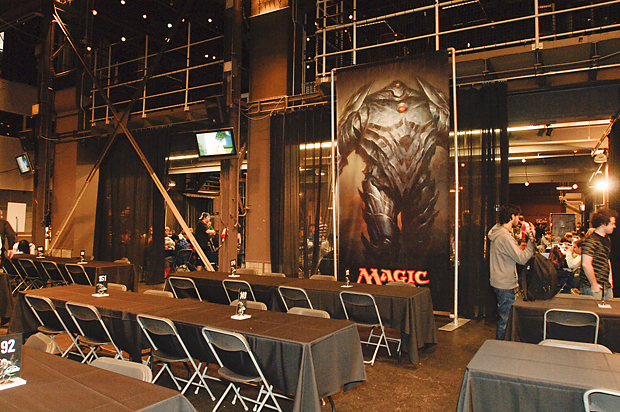 Could this be a card from Scars of Mirrodin we'll be seeing at the Assault on Mirrodin party this weekend? 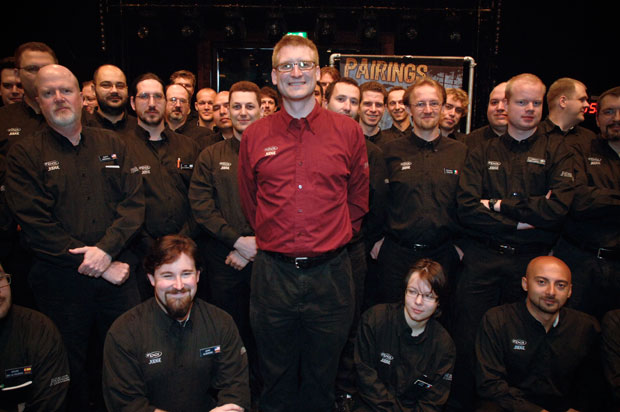 The life blood of the Pro Tour, judges have a challenging job that's often unrewarded with thanks. The head judge for Amsterdam is Toby Elliott, and for each hardworking black and red shirt we here at the coverage crew say "Thanks!"

Those things are all cool, but the Pro Tour also features some of the world's best Magic players battling it out for hundreds of thousands of dollars in prizes! 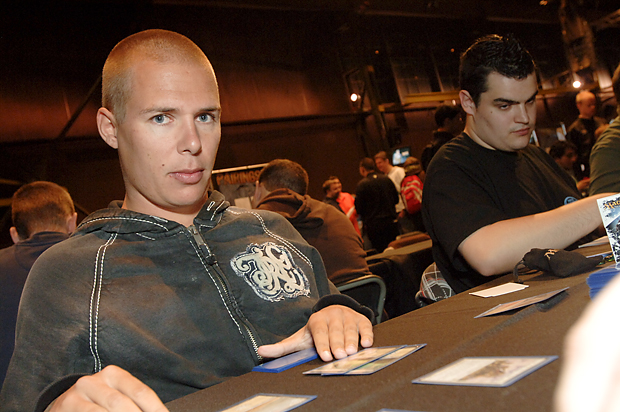 One of the Netherlands's most famous professionals, Noah Boeken. 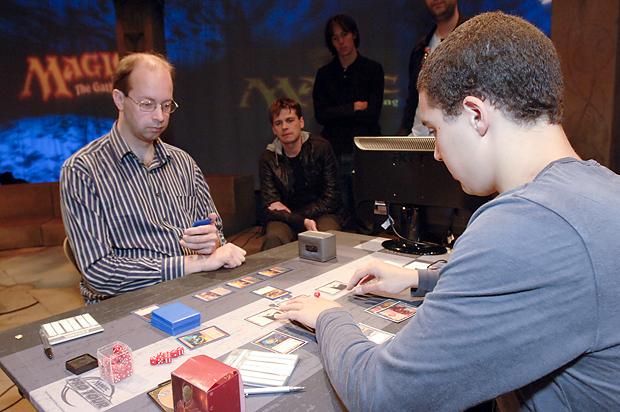 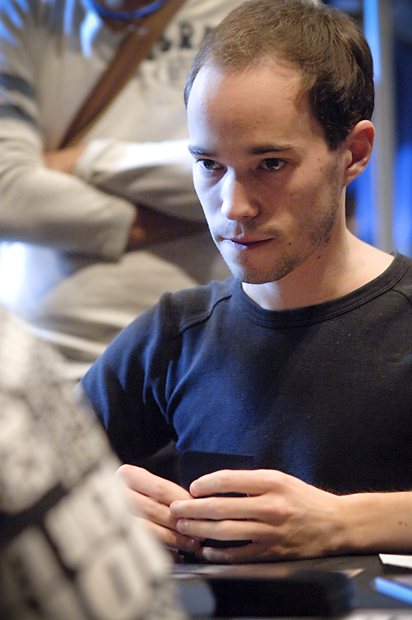 The most recent Grand Prix champion, Kenny Oberg, who won last weekend at Grand Prix-Gothenburg, the largest Grand Prix ever held in Scandinavia! 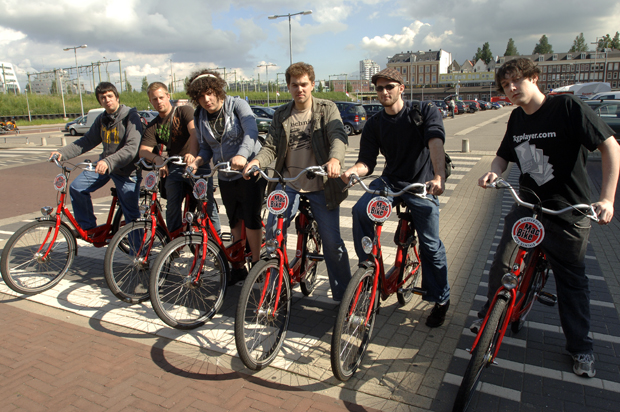 Absorbing the culture around them, a host of Midwest players (and Adam Yurchick) rented bikes for the week to tour around Amsterdam rather than pay for cabs, trams, and other means of public transportation. 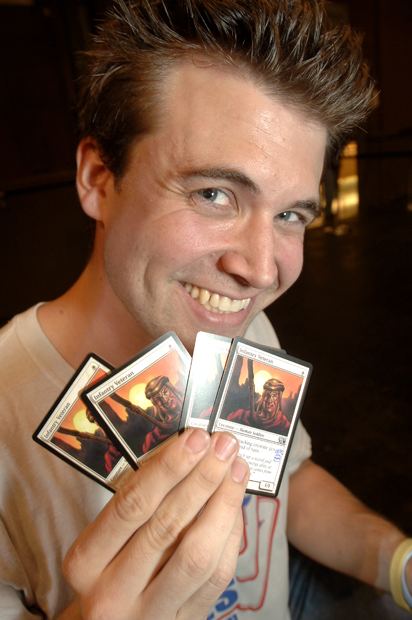 The last champion of the Extended format? Brian Kibler at Pro Tour-Austin one year ago! 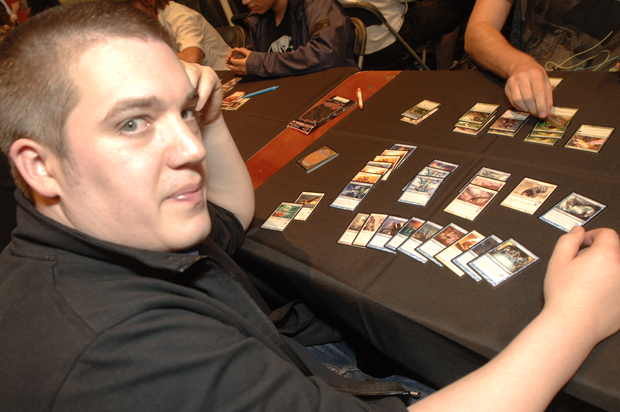 German Juggernaut Kai Budde, the winningest player in Magic history, is back in rare form this weekend, starting off 5-0 before picking up his first loss. Could he earn another Pro Tour Top 8 in similar fashion to Jon Finkel, who won Pro Tour-Kuala Lumpur long after he had stopped playing professionally? 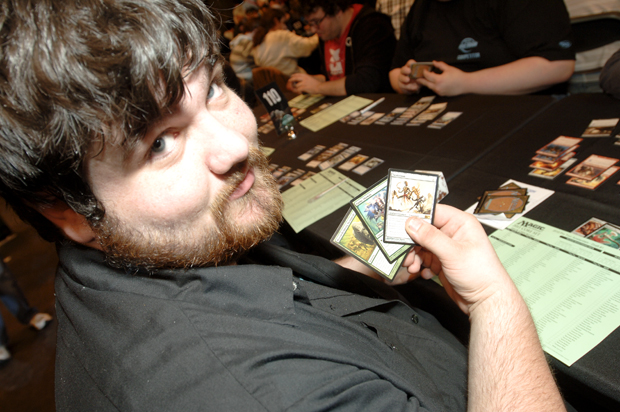 One of the hottest players on tour today, Brad Nelson is hoping to keep his Top 8 luck going strong here in Amsterdam. 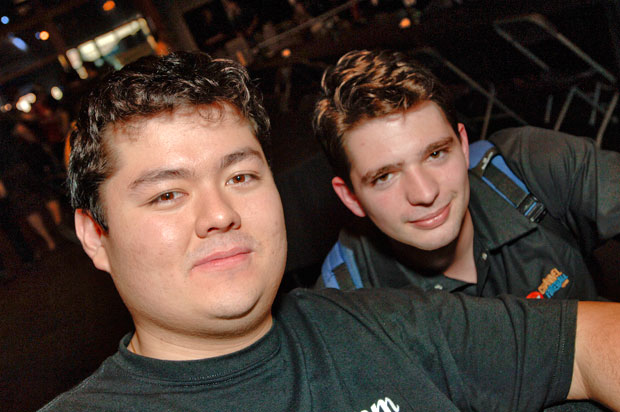