By Scott Johns and Craig Gibson

Welcome to Worlds 2005, the 12th World Championships in the game's history. This is the second time Worlds has come to Japan. The first five Worlds events were held in the United States, but starting with1999 the event began traveling the globe, starting with Tokyo, Japan. Since then we've been to Brussels, Toronto, Sydney, Berlin, San Francisco, and now Worlds is back in the Land of the Rising Sun. We've come a long way from Worlds '94, held in the Seattle Red Lion (really!). Modern Worlds events are visual spectacles, as you can see here just from the entryway that greets your arrival. 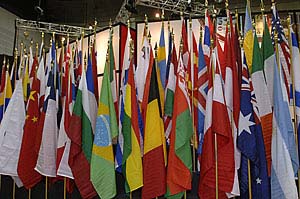 This year features players from 57 different countries, the most ever. (The old record was 55.) 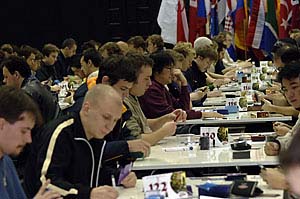 The main event has 287 players battling for the title of World Champion. They will compete in three days of individual competition, working their way through Standard, Booster Draft, and Extended before the cut to Top 8. 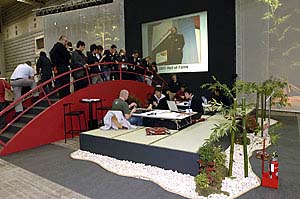 The best-known and best-performing players get to sling their spells in the feature match area, under the eyes of the crowd and against a backdrop of a giant screen featuring a video highlight reel of this year's first Hall of Fame class. At least two Hall of Famers have already competed in this area, and that's before counting several players likely to make it in the coming years. 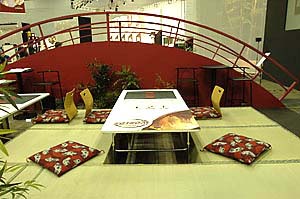 This year's feature match area was aesthetically inspired by the horigotatsu with tatami style of certain Japanese restaurants. The original picture used for the design can be seen on the staff event badges. 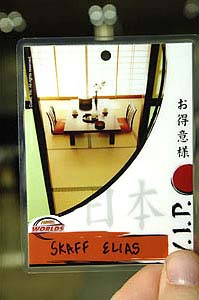 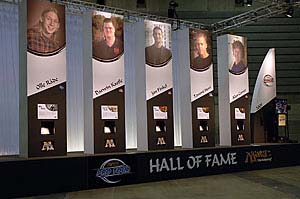 Through it all, the immortalized faces of the first Hall of Fame class watch from their stage. 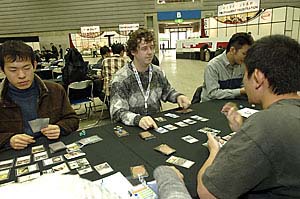 But that stage isn't the only place you'll find Hall of Famer members. After making opponents and judges alike scratch their heads trying to figure out his Standard deck in the main event, Alan Comer has been sighted constantly in the side events area, drafting seemingly non-stop except for food and sleep breaks. When I asked him how other players reacted to playing a Hall of Fame member in a side event, he laughed that big Alan laugh. "That depends on if it's round 1 or not. After round 1, there's prizes!" 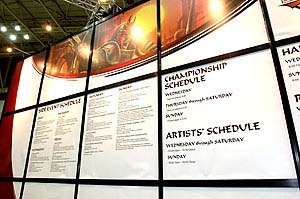 Side events are one of the best parts of the Pro Tour, giving a great chance to match your skills against a crowd of fellow enthusiasts (and, evidently, the occasional Hall of Fame member). In fact, many events have side events 'round the clock, often featuring cool prizes like iPods, ultra-rare out-of-print boosters, and once even a prize of Kobe beef. 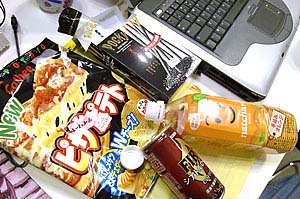 For many Americans at least, another great part of visiting Japan is their unmatched snack prowess. Crazy foods appearing in non-standard packaging is par for the course. (Pictured here is, of course, pizza in the form of potato chips.) I keep seeing other writers taking pictures of their snacks, but all I ever seem to see are empty wrappers. 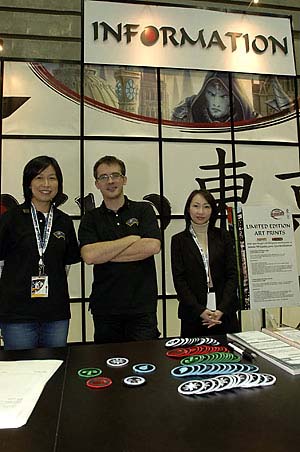 The DCI information booth, this is where you can get a free patch just for checking in on your DCI information. Which patch is most popular wasn't clear, but white was clearly the least requested. No love for the plains, at least so far this weekend. 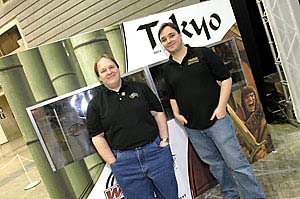 And, tucked off to the side for now, is the magicthegathering.com live webcast booth. Brought to you by Brian David-Marshall and Randy Buehler, live video coverage begins Sunday, and will feature the individual Top 8 plus the finals from the National Team competition. A team will be declared victors, a new player will be crowned World Champion, and you won't want to miss a minute of it! The webcast starts at 6:45 p.m. ET Saturday night (yes, Saturday night…Japan is 14 hours ahead of the United States' east coast).