Photo Feature: The Game of the Year

By Kelly Digges and Craig Gibson

here's a lot more to Magic Weekend than just U.S. Nationals (if the Nationals Top 8, currently riding high on victory, will forgive me for saying so). Not only is Baltimore playing host to the National Championships, the Magic Scholarship Series Championships, and the usual host of side events, artist signings, and play demos, but there's also the Game of the Year, an annual exhibition game pitting Wizards R&D member and Hall of Famer Alan Comer against none other than Magic creator Richard Garfield, PhD.

But this isn't exactly an intense contest of wills; it's a chaotic spectacle with lots of audience participation.

Did I mention the cards are almost three feet tall? And the playmat has a square footage usually reserved for houses?

Richard and Alan are giants of the Magic world, but even they needed to find some help with cards that big (24 inches by 33 inches, to be precise). The search method? Hand out hundreds of free cards, two of which are the "golden tickets" that will put their bearers in the thick of the action. Everybody, mob DCI head Scott Larabee for those cards! 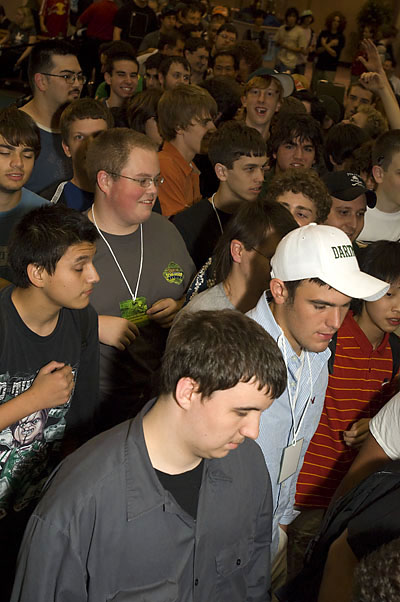 The first volunteer to be called up would get to pick whether to pair up with Alan or Richard, and the second would get to pick, based on a broad description, which of the two decks to use. What were the choices? Let's see…

Game of the Year: Black

Game of the Year: White

While the throng cycled by Mr. Larabee for their chance to play with one of these decks, I got a chance to speak with Alan, who designed the decks, about which one he was hoping to get.

"I do believe the white one is strongest," he said, "but I want a good match, so I hope Richard gets that one."

Alan informed me that each deck contained an "impossible combo" that would be spectacular if it happened. The white deck was sitting on Mangara of Corondor / Whitemane Lion (as well as some tricky stuff with Auras), but the black deck's combo wasn't immediately apparent to me. That Mirari looked awfully suspicious, but I couldn't quite see the trick…

When I asked Richard, who had also seen the decklists, which one he would rather play with, he smiled shyly and said, "I don't know any of the cards."

I asked him if that was a weird experience, and he said, "I've gotten used to it. There was a transitional period when everyone was surprised that I didn't know every card, but now nobody expects me to."

Dillon got first pick of partners, and he bucked tradition by taking Comer over Garfield. With his choice of white deck or black deck, Ian chose white. 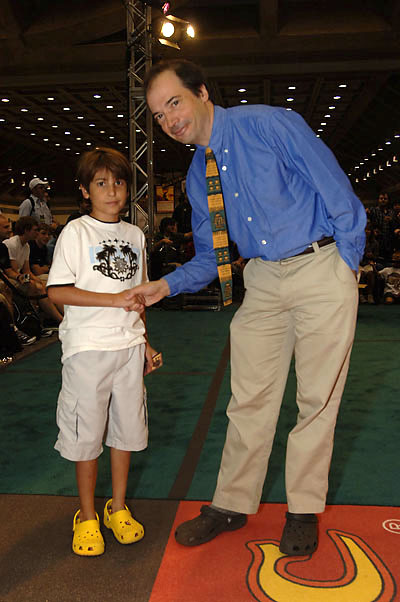 It's hard to resist describing Ian as 'tiny.'

Color commentators Randy Buehler and Jake Theis got the crowd fired up. 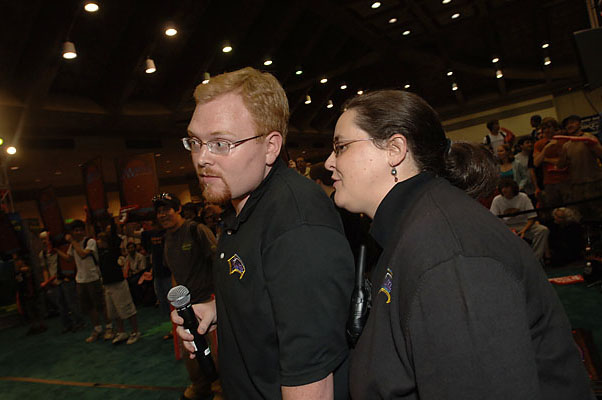 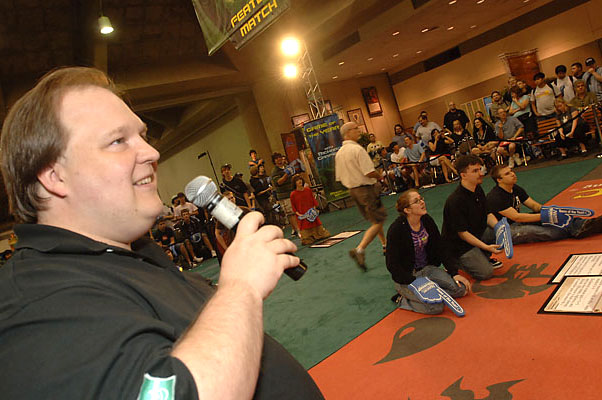 Randy Buehler is an old hand at working a crowd of excited Magic players.

"Alan insists that you destroyed him last year," Randy said to Richard, fishing for some trash-talk.

"That is how I remember it," was Richard's diplomatic reply. 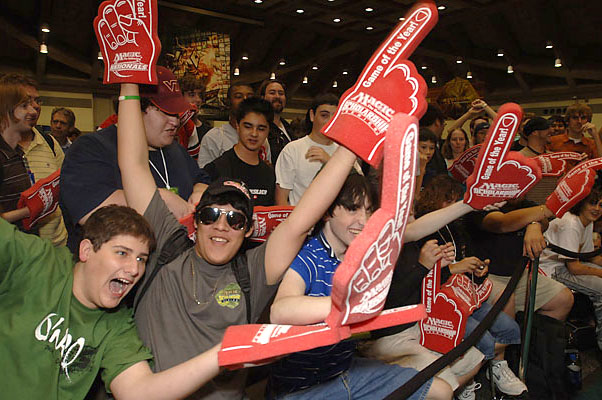 The red team cheers on Dillon and Alan. 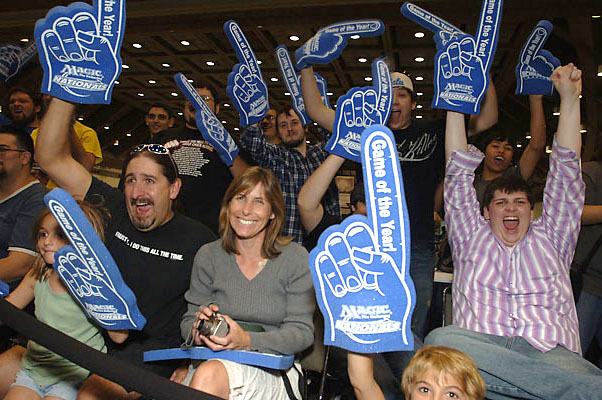 Randy and Jake introduced presiding judge Sheldon Menery, who briefed the competitors, saying that he wanted "a good, clean game." 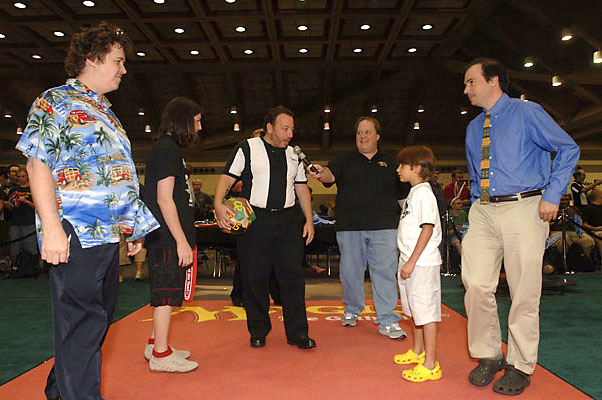 Comer and Garfield stare each other down while Dillon and Ian listen to Sheldon.

Ian and Dillon rolled off with, appropriately, an oversized foam d20. Ian's 14 beat Dillon's 10, and after some consideration, Ian and Richard elected to play first. Volunteers from the audience helped riffle-shuffle the enormous decks, after which Richard crossed the floor to cut Alan's deck.

Each team drew their opening hand, pulling more volunteers from the audience-one to tend each card from in hand to in play to in the graveyard. Both teams cheered as they saw the goodies in their openers. 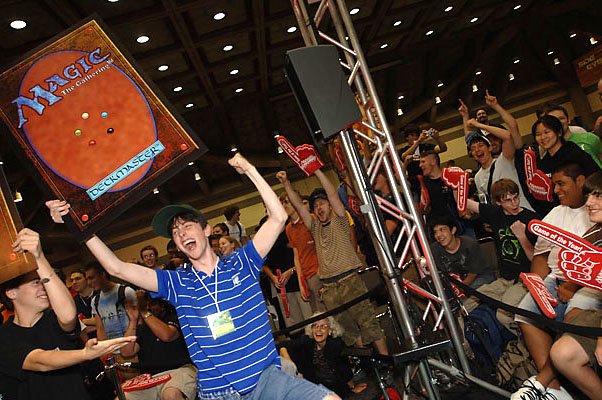 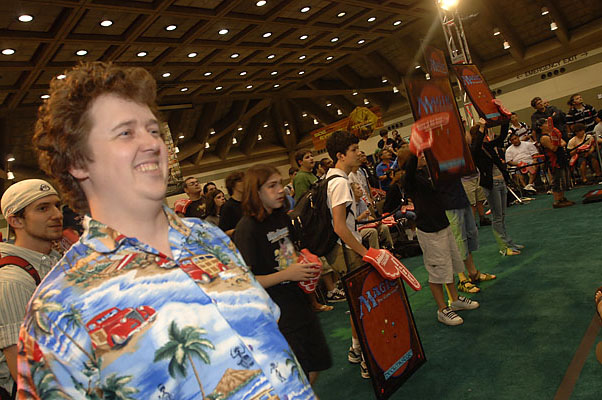 Alan looks sanguine about his chances. 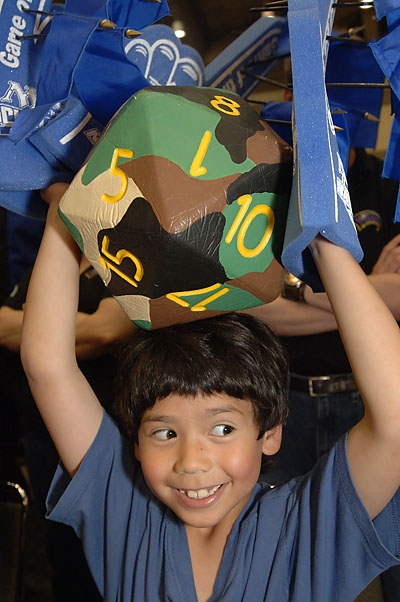 Schuyler Garfield cheers for his father.

The game started slowly, with both teams laying lands and passing. Alan's team had apparently kept a land-light hand; they cheered when the third Swamp showed up.

Ian and Richard made the first play, suspending an Ivory Giant on their turn four, with its five time counters represented by (plushy) Maryland crabs.

Alan and Dillon were able to outdo that, hitting their fourth Swamp and slamming down Mirri the Cursed. The crowd went absolutely nuts as the Vampire Cat crashed into the red zone, beaning Magic's creator for 3.

The blue team cheered at their draw for the turn, and Richard paused to read the card, then smiled. Down came… Bound in Silence! 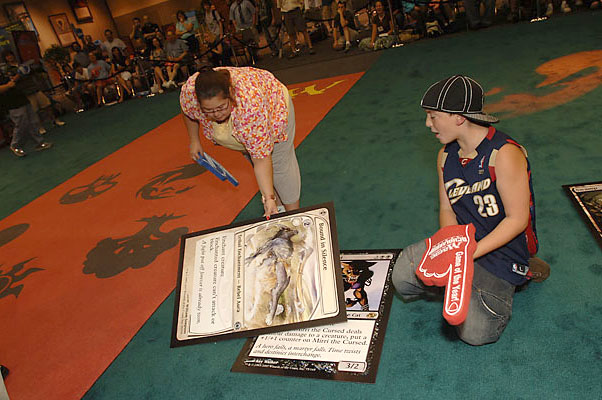 But Alan and Dillon's next turn proved that Mirri had just been bait, as down came a fifth Swamp and a monster threat: Korlash, Heir to Blackblade. 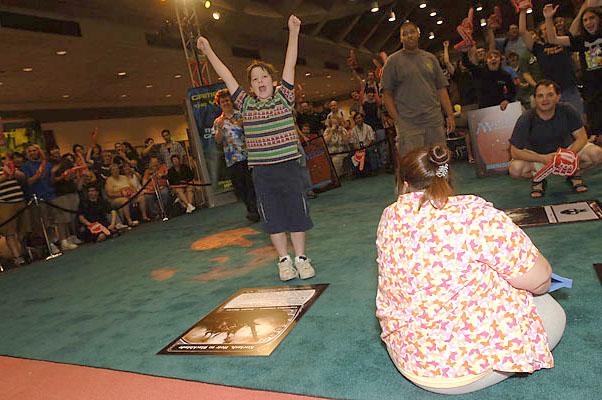 Korlash: Definitely more fun than being a Bound in Silence.

Richard walked over to examine the Future Sight timeshiftee, and then literally rolled up his sleeves and set to work. His and Ian's next turn saw Malach of the Dawn come down for them with no mana up-a "potential Korlash answer," as Randy remarked.

The crowd was out for blood on Alan and Dillon's turn, and Korlash crashed in past the Malach for 5, dropping the blue team's life total to 12. Alan and Dillon played a Graven Cairns and passed the turn. 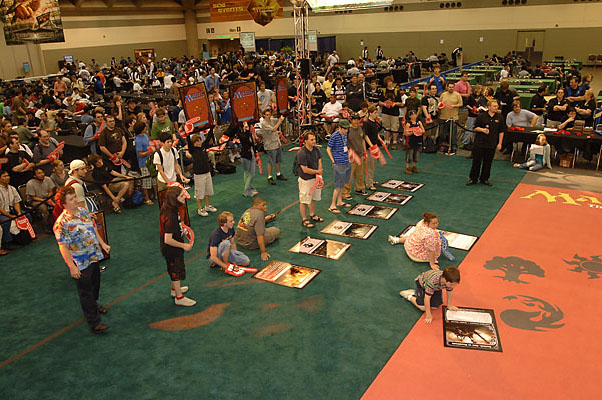 Richard and Ian played a Plains and surveyed their options. Their Ivory Giant was still two crabs from resolving, and while the regenerating Angel could hold off Korlash, they weren't going to get ahead. A Griffin Guide on Malach of the Dawn seemed like a risky move, leaving it unable to regenerate if Alan's team could muster another Swamp to make Korlash a 6/6… but then down came-you'd better sit down for this-Daybreak Coronet! 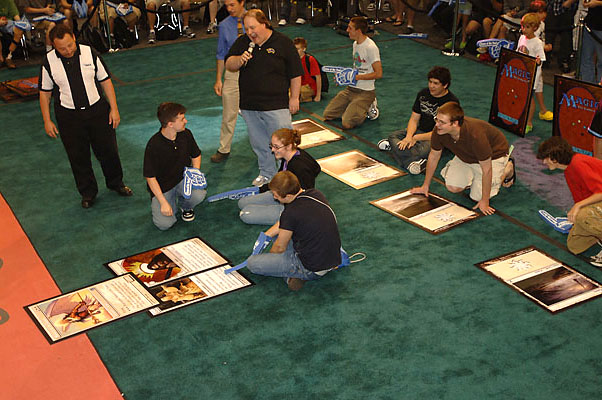 The crowd cheers for the ultimate Build-Your-Own Monster. 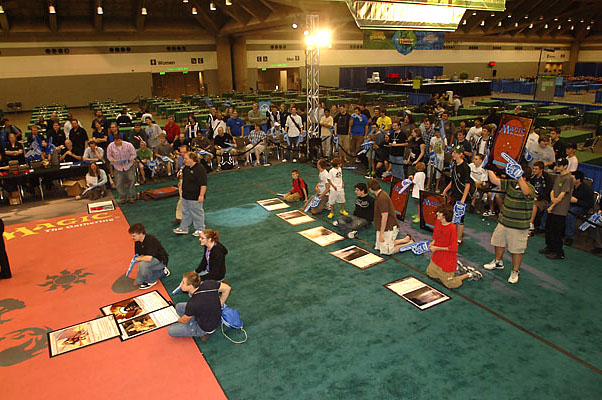 Malach slides into the red zone, with its attendant Auras.

The Malach crashed in to the immense red zone. Red team had Darkness to stave off the beatings for a turn, but they needed a way to get around the 7/9 Angel.

Alan and Dillon weren't too excited about their draw, which was yet another Swamp. They sent Korlash into the red zone… did they have a trick to take out the Malach while blue team lacked regeneration mana?

The crowd behind Richard and Ian was divided… block or no block? Richard decided to see this trick. Block!

Alan cruised confidently back to his hand, tagging three lands to tap along the way, but when he got there he exclaimed, "It's the wrong card!" 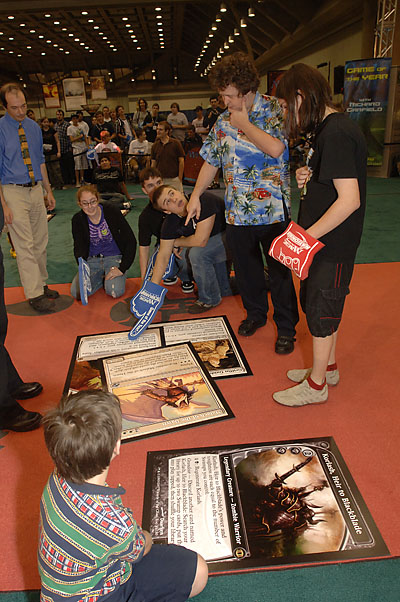 Lifelink puts Alan and Dillon in the unenviable position of making an attack that increases their opponents' life total.

Whatever they had, it wasn't what Alan had thought. He untapped one of his Swamps and regenerated Korlash, but the fruitless attack had put Garfield's team back up to 19. A Shrouded Lore pulled back the only card in their graveyard, Darkness, and they attempted to ship the turn.

An end-step Celestial Crusader met the Strangling Soot that Alan had thought was something else, but Richard and Ian didn't really need it. That Malach was going to do the job.
On blue team's turn, Ivory Giant finally shed its last time crab, and both creatures jumped into the red zone, leaving the life totals at 26-13. 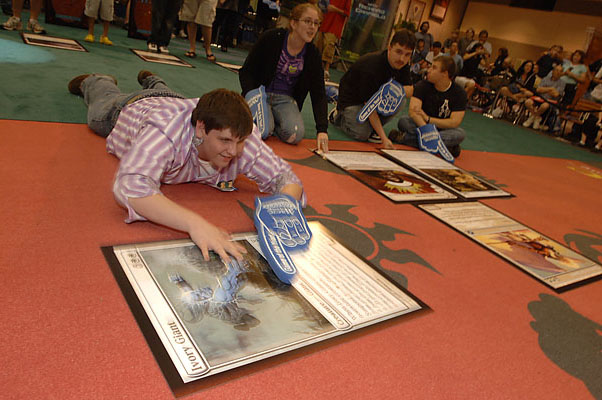 Alan and Dillon briefly ran a trick chaining their second Shrouded Lore into Shrouded Lore, bluffing some kind of storm combo ("One spell cast this turn!" he announced), but Richard and Ian didn't buy it, letting red team have the Darkness after one iteration.

One more attack met a Darkness, but then another got through (33-6). Things looked grim-and then Alan's lands took things into their own hands. After accidentally seeing the third card in their library during a draw step, they conspired to slip it into their hand on the next turn.

The ever-vigilant Sheldon, however, put a stop to those shenanigans, issuing red team a warning for unsportsmanlike conduct. Alan, however, wasn't satisfied, and proceeded to eject his lands from the game! 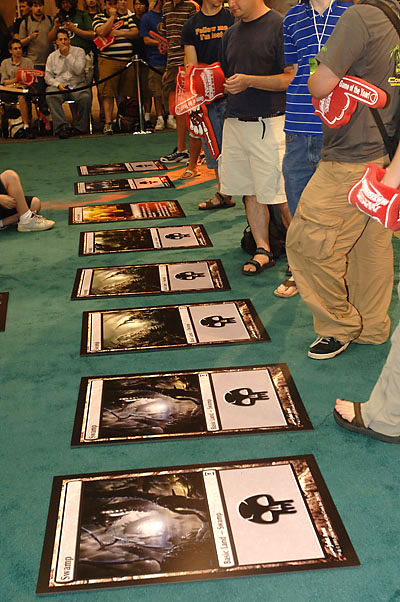 Alan and Dillon's lands, before they went rogue.

The card they wanted so badly? Faceless Butcher.

With Alan and Dillon's life total ticking down fast and Richard and Ian's going the other way, the game didn't last much longer. One more attack and it was all over. 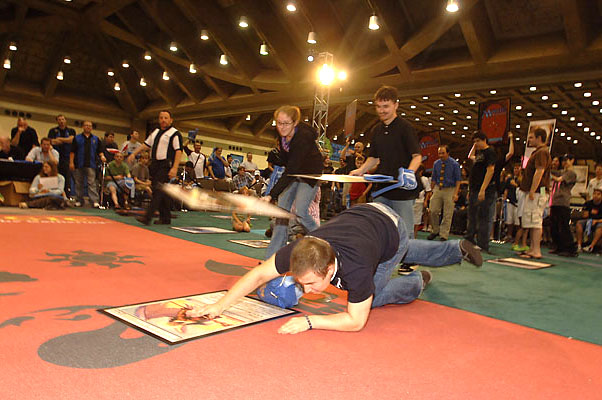 Malach of the Dawn slides into the red zone so fast that its Auras struggle to keep up.

As the winner, Ian got first pick of giant cards to take home, and quickly picked up a copy of Korlash, Heir to Blackblade that's almost as tall as he is. Dillon grabbed a Serra Avenger. 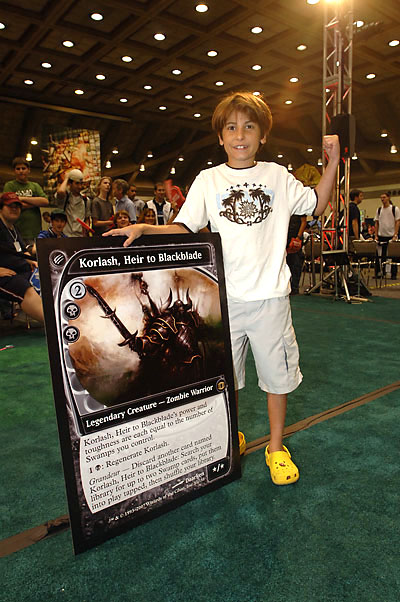 The fruits of victory.

"I thought we had a chance," said Alan, "especially until I realized I'd misread a card…"

He said that what he'd really been hoping to draw was Mirari, the third leg of the deck's impossible combo-a Shrouded Lore / Darkness lock.

Thanks for joining us for the Game of the Year!